Cole Thornton, a gunfighter for hire, joins forces with an old friend, Sheriff J.P. Hara. Together with an old indian fighter and a gambler, they help a rancher and his family fight a rival rancher that is trying to steal their water.


El Dorado is a 1966 American Western film produced and directed by Howard Hawks and starring John Wayne and Robert Mitchum. Written by Leigh Brackett and loosely based on the novel The Stars in Their Courses by Harry Brown, the film is about a gunfighter who comes to the aid of an old friend—a drunken sheriff struggling to defend a rancher and his family against another rancher trying to steal their water. The gunfighter and drunken sheriff are helped by an aging Indian fighter and a young gambler. -- wikipedia

"El Dorado" is a tightly directed, humorous, altogether successful Western, turned out almost effortlessly, it would seem, by three old pros: John Wayne, Robert Mitchum and director Howard Hawks. You could call it, of course a "John Wayne Western." I guess that means it has the Duke in the saddle once again, drawl and all, making his laconic comments on the state of the universe and marching through old Western cliches. But "El Dorado" is more than that. It is a very good John Wayne Western." -- Roger Ebert 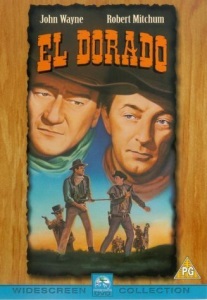