A precocious fourteen-year-old experiences heartbreak for the first time.

Roger Ebert: "one of the year's best films."

It's an unsung hero of the Coming-of-Age drama, a breath of fresh air and an honest portrait of good people finding out what it really means to live, to find acceptance, to discover their place in the world.

Poster's thoughts:
Lucas is another one of those films that I was familiar with as a boy in the 80s, didn't see it again for maybe a dozen years, watched it as a teen, and realized, "this is a great movie."

Its also an interesting crossroads for its leading young actors. It's one of Charlie Sheen's last films before he went A-list with Wall Street (out the same year) and Platoon (out the following year). Kerri Green only did one more movie in the 80s before a five-year pause in her career. And Corey Haim. Roger Ebert said it best about Corey: "If he can continue to act this well, he will never become a half-forgotten child star, but will continue to grow into an important actor. He is that good." Unfortunately, sadly, tragically, it was not to be.
posted by Stuka (2 comments total) 2 users marked this as a favorite
I think that it’s also Winona Ryder’s first movie, although she’s so young that it might be difficult to recognize her.
posted by Halloween Jack at 6:16 AM on February 20, 2021 [2 favorites]

Lucas is a fine little movie with lots of people in it who would go on to do things in Hollywood, positive and negative. Lucas and Maggie are so cute together; I have no doubt they would have stayed friends. Maybe not best buds, but certainly they would have friended each other on social media. All the other main characters and supporting characters are well developed for their places in the story. This is a movie that about teens that actually has adult characters who are not stupid. Even the blowhard coach is no dummy when Lucas makes his arguments on why he should be in the game.
posted by Fukiyama at 3:38 PM on February 20, 2021 [1 favorite] 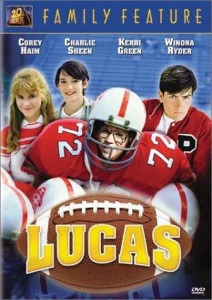