In the grand tradition of Russian fantasy films comes a new version of the supernatural legend of The Viy, written by Nicolai Gogol. An eighteenth century English cartographer sets out on a journey to map the uncharted lands of Transylvania, only to discover the dark secrets and dangerous creatures hidden in a cursed, fantastical Romanian forest. Streaming on Amazon Prime. Note: this is a bad movie.


Early 18th century. Cartographer Jonathan Green undertakes a scientific voyage from Europe to the East. Having passed through Transylvania and crossed the Carpathian Mountains, he finds himself in a small village lost in impassible woods. Nothing but chance and heavy fog could bring him to this cursed place. People who live here do not resemble any other people which the traveler saw before that. The villagers, having dug a deep moat to fend themselves from the rest of the world, share a naive belief that they could save themselves from evil, failing to understand that evil has made its nest in their souls and is waiting for an opportunity to gush out upon the world.
posted by jazon (4 comments total) 1 user marked this as a favorite
This was suggested by the Prime Algorithm when Millennium Actress showed unavailable. We liked the trailer, but the movie itself was hard to follow, the plot wandered around, the vocal dub performance was weak, and the character's motivations didn't make sense. The CGI was good, but it didn't carry the story.
posted by jazon at 3:47 PM on March 14, 2021

There are scenes that are so breathtaking but overall this movie is crappy. A shame.
posted by miss-lapin at 6:04 PM on March 14, 2021

Incidentally, it has a sequel Journey to China: The Mystery of Iron Mask. Arnold and Jackie Chan make appearances! But yeah watch the 1967 film Viy (this film in Russian is called Viy) instead of this. Much better.
posted by Ashwagandha at 3:31 PM on March 15, 2021 [2 favorites] 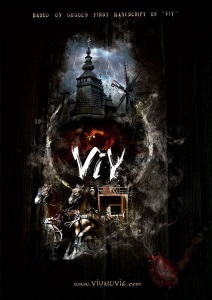