Kirkus on Mexican Gothic, by Silvia Moreno-Garcia: "Inquisitive 22-year-old socialite and anthropology enthusiast Noemí Taboada adores beautiful clothes and nights on the town in Mexico City with a bevy of handsome suitors, but her carefree existence is cut short when her father shows her a disturbing letter from her cousin Catalina, who recently married fair-haired and blue-eyed Virgil Doyle, who comes from a prominent English mining family that built their now-dwindling fortune on the backs of Indigenous laborers."


"Catalina lives in High Place, the Doyle family’s crumbling mansion near the former mining town of El Triunfo. In the letter, Catalina begs for Noemí’s help, claiming that she is “bound, threads like iron through my mind and my skin,” and that High Place is “sick with rot, stinks of decay, brims with every single evil and cruel sentiment.” Upon Noemí’s arrival at High Place, she’s struck by the Doyle family’s cool reception of her and their unabashed racism. She's alarmed by the once-vibrant Catalina’s listless state and by the enigmatic Virgil and his ancient, leering father, Howard. Nightmares, hallucinations, and phantasmagoric dreams of golden dust and fleshy bodies plague Noemí, and it becomes apparent that the Doyles haven’t left their blood-soaked legacy behind. Luckily, the brave Noemí is no delicate flower, and she’ll need all her wits about her for the battle ahead. Moreno-Garcia weaves elements of Mexican folklore with themes of decay, sacrifice, and rebirth, casting a dark spell all the way to the visceral and heart-pounding finale."

Code Switch interviews the author: Colonialism, Eugenics And Downright Terror In 'Mexican Gothic'
posted by MonkeyToes (7 comments total) 4 users marked this as a favorite
Whoa, I just picked this up at the library!

Really enjoyed the author’s earlier work. Excited to read this.
posted by Don.Kinsayder at 8:11 PM on March 20, 2021

I really liked this, although in retrospect I find that I liked the early uber-gothic portions a lot more than the eventual revelation and climax. Noemí is an awesome protagonist and I enjoyed spending time with her, and I thought the colonialist themes were well done, if a little blunt at times. One thing I found interesting was how Moreno-Garcia is writing a book that is specifically opposed to English colonization of Mexico in a genre and style I associate heavily with England. I have to assume that's a conscious choice--it could easily be my own ignorance of Mexican history at play, but when I think of the colonization of Mexico, the colonizers that spring to mind are Spain and the United States, not necessarily the UK.
posted by whir at 9:38 PM on March 20, 2021 [4 favorites]

For me, this book was two parts a slow, creepy, atmospheric climb up a roller-coaster hill, and a hundred pages of a hideously fast fall. I enjoyed the suspense and the descriptions despite the occasional bluntness of the theme; the rush of the last hundred pages was more like a collection of the author's favorite scenes from horror movies than her own sure vision. (Yes, this would make a terrific five- or six-episode HBO series, is what I'm saying, and the costuming would be delicious.) I wish she had spent slightly more time on the real and true source of the High Place's pain--it goes by in a powerful blip--but maybe I am just impatient these days with the Action Sequence That Resolves It All. (N.K. Jemisin's The City We Became does a neat trick with this, setting up a big battle at the end of one chapter and starting the next with the aftermath, and I just about cheered.) Entertainingly creepy read-once book.
posted by MonkeyToes at 6:30 AM on March 21, 2021 [2 favorites]

A thing I love about Silvia Moreno-Garcia's novels is that they are all so different. They have similarities -- strong clear female voices, the Mexican setting, and engagement with "traditional" horror and fantasy tropes seen through a distinctly Mexican (and anti-racist and anti-colonialist) focus -- but each one defies the expectations of the last. I like some better than others, but I never fail to be surprised.

If I have a criticism, it's that the insertion of non-human forces into a story about racism and colonialism (and classism and so on) is that it risks letting the villains off the hook. If there was a supernatural force driving it all, doesn't that make the Doyles victims as much as everyone else? Now, my rejoinder is that Moreno-Garcia makes it clear that, at some point, they all "bought in" to the system, that they may have been lured and cajoled, but they were never forced, makes it work better as a metaphor, which is usually what I want in a Gothic.

I get why people felt that the ending was a little flat. Moreno-Garcia is still struggling with really satisfactory narrative endings. They get to the right place emotionally and polemically, but there is usually a point in the last 20-50 pages where I feel that the narration and plot construction changes gears into "OK, I've said what I have to say, let's get this thing parked in the garage." Oddly, despite other slight narrative weaknesses, Certain Dark Things probably has the most completely satisfying ending of any of her novels.

This novel makes a nice pairing with Crimson Peak, although the latter missed at least one trick for a really satisfying Gothic.
posted by GenjiandProust at 12:08 PM on March 22, 2021 [2 favorites]

I really liked this. The buildup was great. The descriptions! The people! The Gothicness! Great allusions to Rebecca and The Yellow Wallpaper in particular. And of course, Udolpho.

But I agree with others that the reveal was a let down. It felt more like something out of a B movie from the 1950s, really kind of silly. I'm OK with supernatural/quasi supernatural stuff in Gothics, but it has to have that plausible deniability that makes a true horror.
posted by basalganglia at 2:12 PM on March 23, 2021 [3 favorites] 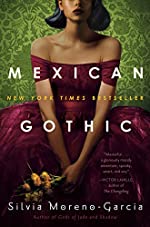