The city is breathless waiting for the results of the Maxford House Coffee Slogan Contest; first prize: a staggering $25,000. Jimmy MacDonalad, a $20/week clerk and serial slogan contest entrant, thinks he's got it locked in this time with his entry -- If you can't sleep, it's not the coffee, it's the bunk! (It's a pun, you see.) With the prize money he and his girl Betty can finally get married. Who knows what wackiness might ensue if some of the fellas forged a fake telegram telling him he'd won? Written and directed by Preston Sturges.


It may have been Shrove Tuesday in November for some folks yesterday, but it was "Christmas in July" for those who caught the new picture at the Rivoli. And a joyous occasion it was, too. For this trick and wrily titled film, which is another of those one-man creations by Preston Sturges for Paramount, is just about as cunning and carefree a comedy as any one could possibly preordain—the perfect restorative, in fact, for battered humors and jangled nerves. As a post-election jog to national sanity, we recommend "Christmas in July." Maybe you already know Mr. Sturges from "The Great McGinty" and "Remember the Night." If so, you are aware how he can take a thin idea—a trite idea, even—and elaborate upon it with such fresh and eliptical fun that it suddenly seems important. Thus, when we tell you that his hero in the present instance is a $20-a-week clerk who hopes to win a slogan contest paying $25,000, that the whole story has to do with nothing more than the things he does when he is deluded into thinking he has won it, then you'll appreciate the wonder of the Sturges sleight-of-hand. Out of such gossamer, really, he weaves a delightful comic fabric before your eyes. How does he do it? Well, through the creation of solid comic characters, for one. His hero—and inevitable heroine—are just nice, honest youngsters, that's all. They want a break, so they can get married. But against them are arrayed such a scatter-brained lot of practical jokers, business tycoons and slightly off-center store clerks that the attainment of the break becomes a gantlet. Then Mr. Sturges contrives some wholly bewitching surprises. Details are worked out with elaborate ingenuity. Things pop when you least expect them. He keeps you laughing with, not at, his youngsters. And his performers are directed to perfection. Dick Powell and Ellen Drew, neither of whom has ever been especially notable for dexterity, emerge as a couple of nimble and captivating babes in a madcap wood. Raymond Walburn plays a big coffee merchant as though he were almost ripe for the nut-house. Almost, but not quite—that's the secret. And ever so many other characters are given subtly distorted shape by Ernest Truex, Alexander Carr, Julius Tannen and—well, the rest of the cast. As a creator of rich and human comedy Mr. Sturges is closing fast on the heels of Frank Capra. If you wish a really good way to spend some election winnings, we suggest that you take your friends—especially the loser—to see "Christmas in July."
-- Bosley Crowther, NYT, 1940, best read aloud in old timey news voice.

Currently streaming on the Criterion channel.
posted by fleacircus (4 comments total) 2 users marked this as a favorite
Just dropped in to say this is my favorite Preston Sturges movie. Bosley Crowther, however, is my least favorite movie reviewer. I'm kind of sorry he liked it.
posted by acrasis at 2:42 PM on March 23, 2021 [1 favorite]

I'd never heard of Crowther before but that review (plus his name) is so of the era. It's entertainingly vile.

I think The Palm Beach Story may still be my favorite Sturges movie, though I also saw it first so there is always that bias. This is easily my second favorite so far. (I haven't seen Sullivan's Travels yet.)

When I watch this one though I kept thinking how it felt like the birthplace of The Hudsucker Proxy, and really I don't think I've ever seen another movie that evoked the Coen brothers so strongly. I felt like I could feel them watching this.

(The moment the Jewish department store guys showed up was nervous and I almost didn't post this movie because of it, but I thought it was okay because they redirected it pretty quickly at the big capitalist Maxford. And also like seeing black characters in a Sturges movie felt rare as hell, I'd rather see them than not I think, so the era shows its true face more clearly, if that makes sense.)

Well. "Palm Beach Story" is my second favorite. Possibly "The Great McGinty" is better than either of them. "The Lady Eve" is also good. Can you tell I have a box set of Sturges movies?

I will say a nice thing about "Miracle of Morgan's Creek", not generally considered one of Sturges' best. It is a miracle of modulating the performances of actors so they're all on the same wavelength. You have to see it to understand what I mean, but if even a single performer calmed down, the entire thing would collapse.

I'm glad you posted this. I get overwrought when my young friends pick some Will Ferrell movie as the funniest thing ever and I sputter "Have you EVEN SEEN any movies?" Everyone needs to see... er, one of these Sturges movies.
posted by acrasis at 5:30 PM on March 24, 2021 [1 favorite]

I forgot about The Lady Eve. I think in my brain that movie is filed under Barbara Stanwyck. She is just so amazing in it.

McGinty did not really click for me. Miracle of Morgan's Creek felt more often labored than funny, though I understand what you mean about the actors being on the same page. I feel like the main guy and girl just are too dopey, they are having to work really hard to carry through the material. I do however think they younger sister character is fucking hilarious. The short scenes with the corrupt governor and his right hand are pretty funny and snappy.

I think the main couple in this movie have pretty good chemistry. The opening scene where they delve into the guts of his terrible slogan for example becomes funny to me as it just gets mildly absurd and also seems like the kid of silly disagreements that a couple would have. (Of course with stifling gender roles heaped on top of it.)
posted by fleacircus at 2:40 AM on March 25, 2021 [1 favorite] 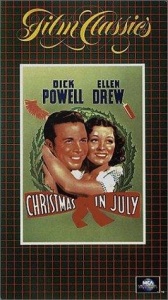