After wrapping up with family and steeling their nerves, the Mighty Nein return to the frozen peaks and valleys of Eiselcross to weigh allies and plot their next course of action...
posted by nubs (8 comments total)
Why the heck did they think about working with Trent after choosing to fight and not before? They could have approached him to begin with if they felt it was an option.
posted by bleary at 7:29 PM on March 29, 2021

The Trent thing was so dumb. Like, I get that they were trying to put their two enemies against each other to try to weaken them, but being able to do that would require the Might Nein to somehow out-manipulate a man who is notable for training and manipulating generations of child spies in a secret program.

And, I mean, their last heist attempt got them into this situation, because the M9 don't do subtle.

This seems like the sort of dumb idea that comes up in group chat, nobody shoots it down right away, and then they all fall in love with the idea of it succeeding that nobody is willing to think about this realistically. I'm so glad that Caleb failed that persuasion roll.
posted by dinty_moore at 7:43 PM on March 29, 2021

The other thing is that if Caleb is really the first Vollstrucker to get out of the program after generations of child spies, there's no way that Trent was telling the truth about orchestrating Caleb's escape. Which means he's good enough at lying to get around Cad's insight checks.

Trent obviously needs to be in control, and specifically needs to feel like he needs to control and have full access to Caleb, but other than that, they have no idea what Trent wants, or really, a good idea of how to manipulate Trent. If they did want to lure Lucien and Trent into a battle, it would be better done at a safe distance away, maybe by tricking them into thinking the other is important to Caleb, instead of giving Trent ready access to everyone who could be used against Caleb.
posted by dinty_moore at 8:11 PM on March 29, 2021

Catch up crew finally reporting for duty! On the one hand my timing couldn't be better, on the other hand i am horribly stressed and fries at the hints that this is the last arc. At the speed I've been consuming it gems like it's coming at me like a freight train. Do what's the deal on here, anyone live watch on mefi chat or anything? Would like to watch tomorrow nights live but the twitch chat is gross.
posted by Iteki at 1:31 AM on April 1, 2021

I usually watch only about an hour or so on Thursdays because of my timezone. I've been sticking to youtube for watching because sometime there are captions.

I end up watching to the break, or thereabouts for the timezone, too, then watch the rest on Monday. Usually it's just me and my husband, occasionally messaging other friends that might be watching. I've never used mefi chat, but I don't have any, like, ideological issues with it.

As for other live chat social media options, I don't know if any of them are good, but twitch is definitely the worst. It's really what sort of stuff will irritate you the most - reddit has a lot more people yelling about how they're not playing their characters right from a technical standpoint but has a minimum of shipping nonsense, tumblr is good for fanart and character analysis but a lot of it is shipper focused, following the twitter hashtag is like if you combined both reddit and tumblr (for better or worse) and then added some fan entitlement, because the cast is actually active there and might respond. Any of these options are still better than twitch chat. There's also some discords if you look for them, but I can't speak to how any of them are.

Paying attention to the sort of extra/social media stuff is a double edged sword - some of it is . . . a lot, but apparently Matt confirmed that Yussa was trans yesterday, and the majority of the reaction boiled down to excitement, Yussa fanart, and arguing what it means about the theory that he's also a gold dragon. Meanwhile, Liam apparently mentioned in Talks that the entire reason why he wanted to make the deal with Trent was to make Caleb have to deal with Astrid, Eadwulf, Jester, and Essek all in the same place to create a bisexual maelstrom, which . . . I don't know if that's better or worse than what I was imagining, but good on him, I guess.

(Widogast's Bisexual Maelstrom is a seventh level spell that causes all creatures to make a wisdom saving throw or be affected by a variation of the confusion spell that also allows for them to be charmed. Also, take 2d4 psychic damage at the start of each turn)

It could definitely be near the end, but I also think that's kind of relative? I think even if they didn't deal with Trent and Ukatoa during the main campaign, they might come back for a one off or something - it's hard to imagine that Fjord just lets that one completely slip by. I wouldn't be surprised if they took a real life break soon - everything is So Much, All The Time still, this entire arc has been pretty heavy, but I don't know if that'll be after the campaign or after the arc, then a little bit of cleanup for the last few sessions.

Speaking of a good break, I really like what Matt did with Yasha's battle - a) not controlling the storm spirits means a little less work for him, b) getting the rest of the party involved means they're not staring into space while Ashely does their thing, and it's a fun combat for everyone (I loved that they all named their storms spirits and gave them backstories), and c) it's a lot less pressure on Ashley if the rest of the cast is involved. And the sword/lightning bolt moment was seriously metal.
posted by dinty_moore at 10:51 AM on April 1, 2021 [2 favorites]

I really liked how excited everyone at the table got at the realization that they got to control the spirits, followed by the cringes as they started rolling damage against Yasha.
posted by nubs at 1:59 PM on April 1, 2021 [3 favorites]

Also, I have to say that "It's not a Tombtaker" delivered in an Arnold Schwarzenegger voice had me laughing my head off for about 5 minutes.
posted by nubs at 7:57 AM on April 9, 2021 [4 favorites] 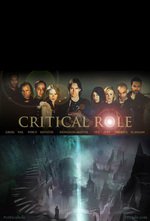