A psychopathic criminal with a mother complex makes a daring break from prison and leads his old gang in a chemical plant payroll heist.


Gang leader Cody Jarrett lives for his mother, planning heists between horrible headaches. During a train robbery that goes wrong, Cody shoots an investigator. Realizing Cody will never be stopped if he knows he's being pursued, authorities plant undercover agent Hank in Cody's cell. When his mother dies, a distraught Cody breaks out of jail, bringing Hank along to join his gang. With Hank in communication with the police, Cody plans a payroll heist.

Eric Henderson: Once again, the most denigrated angle of a Walsh picture is the perception of his ostensible disinterest in the motivation of his “good” characters, and Edmond O’Brien’s portrayal of the undercover inmate “Vic Pardo” is no exception. Without bothering to quote Manny Farber again, I’ll merely counter that O’Brien plays as crucial a role to the film’s success as a cornerstone of Cagney iconography as Cagney’s own bravura tantrums in the mess hall upon learning of his mother’s death. To accept the film’s stabs at Freudianism, take note of the transference of custodial duties between Ma and Pardo in the scene in which Jarrett collapses in the middle of the jailhouse assembly line. Pardo drags Jarrett behind a set of shelves and pulls the writhing mass of shaved nerve-endings up to his lap, urgently massaging the back of his neck in a shot that immediately recalls the earlier moment of familial lust when Ma invites Jarrett onto her lap. It’s over nearly as soon as it started (I can only presume that in those days the Production Code set a strict limit to the number of seconds two males’ bare skin could be in direct contact), but the psychological shift informs the crux of the final betrayal, when Jarrett learns of Pardo’s true identity and nearly dissolves into bitter crying jag. White Heat’s ultimate message: love’s a bitch…even crypto-incestuous love.

Danielle Solzman: One of the ideas to come out of White Heat is the idea of a gangster having a mental illness. We also see a character with a strong attachment to his mother. While I haven’t seen Psycho yet, this mother-son complex certainly begs a comparison between character relationships in the two films. Don’t worry because I’ll be watching the Hitchcock film in due time. Perhaps the two films could make for the perfect double feature?

It isn’t only that Cagney was away from the genre for so long. The actor, who grew to fame with the Warner Brothers gangster dramas, was also away from the studio. He made the decision to walk away in 1942 after starring in Yankee Doodle Dandy. The role would win him an Oscar but his Warner days were done for the time being. Of course, he came back for White Heat. Following the film, he would go on to make a few more films with the studio through 1955. If Jack Warner had his way, it’s very well possible that Cagney might not have even been considered. The fact is that co-writers Ivan Goff and Ben Roberts had suggested the veteran actor for the role. Watching the film now, it’s honestly hard to imagine anybody else in the role.

White Heat still remains one of the greatest gangster films of all time.

Robert Ellis: How violent and sadistic can movies get? This picture is more brutal and raw than any since the Warner's cycle of gang films in the late 30's. The story of a crazy gunman and his "moll" and cops and his flaming robberies. What a sad story that Cagney, a man of intelligence and taste, could not succeed making pictures of artisty and had to come back to Warners and make this tripe. I'll be he's not a very happy man.

Trailer
posted by Carillon (1 comment total) 1 user marked this as a favorite
I liked this movie a lot, but really felt that the code had a negative impact on this film. Just the insistence on the cops and knowing that Cody was going to have to get his comeuppance. Still really fun and interesting.
posted by Carillon at 1:50 PM on May 15, 2021 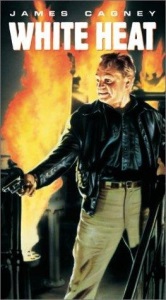