Los Angeles, 1941. A run-down street of seedy shop fronts and blinking neon signs. Music from somewhere features a lonely horn. The camera pans up to a second-story window of a flophouse. In the window, his hat pushed back, his tie undone, Philip Marlowe lights another cigaret and waits for the cops to arrive. He is ready to tell his story.

These opening shots are so evocative of Raymond Chandler's immortal Marlowe, archtypical private eye, haunting the underbelly of Los Angeles, that if we're Chandler fans we hold our breath. Is the ambience going to be maintained, or will this be another campy rip-off? Half an hour into the movie, we relax. "Farewell, My Lovely" never steps wrong.

Ashley Norris: Director Dick Richards maintains the ambience set up from the beginning which is one of its strong points. It holds the ambiance of the sleazy, smokey, racist 1940s to great effect, feeling it like a noir and not a camp rip-off or parody that it could easily become. The seriousness is infectious, it holds true throughout with Marlowe’s witty character that cracks wise at great opportunities. The script is written in the true dialect with many a great line like “[whilst being shaken] …quit trying to make a milkshake out of my insides, will ya?!” which is a funny line but it maintains its foggy tone which is a feat.

What aids this is Robert Mitchum’s performance. It feels as though he was almost built for the part alone; the costume fits him perfectly and his comfort shines through as he effortlessly utters the words. It’s a brilliant performance that’s naturalistic but being varied from his other work showing his talent. His narration is another thing that tops it off; the tone that everything is said in is a true gritty, private eye way, it’s everything you expect of a neo-noir.

Jacoba Atlas: The basic problem with the film is one of viewpoint. The filmmakers have chose to play the movie as an inside joke; exaggerating the datedness of Chandler's creation, while admonishing us to take it to heart. The producers have set out to make a very nostalgic movie and have succeeded only in creating condescension.

Trailer
posted by Carillon (2 comments total) 5 users marked this as a favorite
I thought it was quite solid! Interestingly every review I found made direct references against it to Chinatown, either as a close comparison, or as a movie this fell well short of. Charlotte Rampling looks very much like Helen Hunt to me in this movie, in some scenes it was uncanny enough to distract me. Nice too to see Marlowe have to tell someone not to call him Phil.
posted by Carillon at 10:42 AM on December 26, 2021

It's been a while, but I recall it being pretty solid as a movie and reasonably solid as an adaptation. It just oozes ambiance. In addition to Mitchum's tasty performance, it has a slew of wonderful 1970s character players. I particularly liked Sylvia Miles's performance.

I have to say, I also have a little soft spot for this movie, as I remember when they filmed the run down motel scene at an actual run down motel near where I lived, as a kid.
posted by 2N2222 at 5:02 PM on December 27, 2021 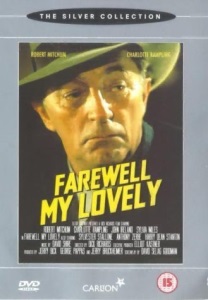