New animated series based on the game, Legend of Legends. A tragic introduction to the sisters Violet and Power and the death of their parents during a brief failed uprising by the under city (Zaun) against the high city of Piltover. Their lives take another turn when later a heist in Piltover over awry in several unexpected ways.
posted by KaizenSoze (11 comments total) 4 users marked this as a favorite
I had low expectations. Yet another animation series based on a game, which I have never played.

I was very wrong, the animation, voice acting, and story telling is extremely good. Way better than most animated shows, east or west, I have seen in awhile.

Playing on Netflix. They release three episodes a week.
posted by KaizenSoze at 3:06 PM on November 14, 2021 [2 favorites]

I too did not have high expectations for this going in, but I do play and enjoy Legends of Runeterra (a CCG based on the same IP as League of Legends, and this show) so I figured, what the heck, I'll give it a whirl. I didn't feel like the plot or characters were covering any really new ground so far (I'm only one episode in at this point) - it's mostly walking the line between "well-established tropes" and "outright cliches" - but it was very well-voice-acted and the animation work was gorgeous.

Of course I think my sense that the plot isn't covering new ground may be partly because I do play the card game, and so I already have a sense of how some of these character arcs are going to play out.

I've never played League of Legends, and my expectations for something produced directly by Riot games were pretty low, but I've been watching this and enjoying it. The characters are good, the plot is fine, but as everyone notes the animation is really the star of the show. I also appreciate how it's violent without being brutal... it's more video game violence, which is all I really really stomach these days.

I also think you'd be better off making a post per act, because each subset of three episodes does tend to bleed together, and there's probably not going to be much discussion otherwise. Really I might just make a single post for the whole thing.
posted by Alex404 at 4:03 AM on November 17, 2021

I went in with a negative quantity of information; I thought LoL was a different game entirely. While some of the plot might be a little obvious to people who had heard of these characters before, I had no idea what to expect.

This show is astonishingly good and I very much hope there is a second season.
posted by hototogisu at 2:26 PM on November 22, 2021

I don’t know. I find the art style a little muddy, and the pacing is kind of weird. I don’t feel that long opening sequence added anything to the story, and there were other scenes where I felt like I might have enjoyed more if I cared about the characters, which, at this point, I don’t really. The voice acting is good, the animation smooth, the art style may grow on me, so I will stick with it, but it’s an awfully threadbare plot to be hanging so much praise on….
posted by GenjiandProust at 7:54 AM on November 28, 2021

Also, they did not need to kill that cat (at least it was off-screen).

That's your opinion lol. It works for me.

I suppose people who have grown up with Runeterra and have been familiar with the lore and world-building for the past 10+ years are probably viewing the series quite differently than people who are being introduced to these cities / part of this world for the first time through the series. This could be why you seem to be having difficulty understanding the setting/world depicted in the series (going by your comments across multiple Arcane threads). For people who are familiar with the lore/worlds (their economies, histories, conflicts, governance, the different factions etc) and who have spent years speculating (and cosplaying and fanfiction-ing, etc) on the lore, its characters and their backstories, I guess this series comes across very differently. Easter eggs everywhere - brief mentions in the dialogue that probably don't make much sense to people who are new to the lore/world are fueling entire threads of discussion within the community.

In a way, not everything is explained or spelled out in Arcane because much of the initial target audience doesn't need it to be spelled out (and it's more fun for things to be alluded to subtly, so people can speculate more).

there were other scenes where I felt like I might have enjoyed more if I cared about the characters, which, at this point, I don’t really

yeah - I think this is probably the reason for the difference in reactions. There's a huge community of people all over the world that have cared about these characters and their stories, for years. Even if you play the game without caring about the lore, you can't avoid knowing at least a little about the champions and their lore because of their in-game interactions, voice-over lines, all the seasonal events, game modes etc... Like you can't avoid knowing Jinx has a sister that she doesn't like because she keeps ranting about her sister every few minutes in the game. The people who played this game as teenagers or college kids are now uhh... middle-aged (which is also why they still like Imagine Dragons). It's a generation of gamers that grew up on this world.

Arcane is also just one very small part of the whole fantasy world and its stories, too. It's a story focusing on a few main characters in 2 Valoran cities. There's much more to Valoran, and beyond Valoran there are other countries too, with their own cities, all with many other characters etc.

Jinx, Vi, Caitlyn and Ekko aren't even my favorite characters/champions (and all my favorite champions' backstories have been retconned (for the worse, imo) over the years) but it's been nice seeing their stories told in this format.
posted by aielen at 1:00 AM on December 2, 2021

There’s a difference between drama & worldbuilding and fanservice. If you have to already be on board for the story beats to work, it’s kind of a closed community, no?
posted by GenjiandProust at 4:12 PM on December 2, 2021 [2 favorites]

There's something about the way Mylo's drawn that makes me dislike looking at the character.
posted by The corpse in the library at 6:10 PM on December 11, 2021 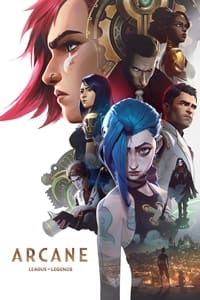