Aided by the ghost of a dead assassin, a macaque cuts a path of destruction through the Japanese underworld when his troop is massacred by the Yakuza. Based on the Marvel comic.

The Hollywood Reporter: It’s still baffling to me that a company with a history of ill-considered, whitewashed exoticism — google “Marvel,” “Akira Yoshida” and “C.B. Cebulski” — would put so little effort into authenticity (putting aside that gun-wielding monkeys aren’t, in and of themselves, wholly authentic).

Now streaming on Hulu (in the U.S.)
posted by 1970s Antihero (3 comments total) 1 user marked this as a favorite
I was frustrated when I couldn't seem to turn off the descriptive audio for episode 2, but it looks like that was a case of Hulu accidentally mixing the wrong audio asset, since other people are having the same problem.
posted by 1970s Antihero at 6:47 AM on November 17, 2021

Good design, character and background, but that is some shitty animation. Maybe it's on purpose. Maybe they want to look like cheap manga, but it's so distracting.

But you buried the lede. Jason Lassokis is in this. Weeeee! I like the storytelling, but I wish it had a better budget.
posted by Stanczyk at 4:50 PM on November 17, 2021

I started it largely because I'd confused the creator, Daniel Way, with Gerard Way, who made The Umbrella Academy. I'm early on.
posted by Pronoiac at 10:23 AM on November 20, 2021 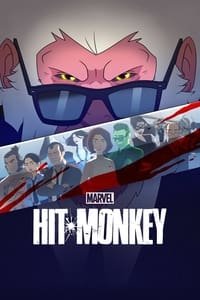