When the 57 residents of Arizona border town Sangre de Cristo are massacred in a single night in 2011, the sole survivor, a Mexican immigrant, is quickly arrested, charged, and convicted of single-handedly murdering all of them. In 2015, a documentary examines the case and raises questions: Why doesn't the evidence seem to implicate him? Why were people so eager to blame him, no matter how implausibly? And do the horrors captured on the roll of film he shot that night provide a more plausible explanation for the killings?

It's currently on Tubi, Roku Channel, and Vudu, and it can be watched free on YouTube.
posted by Pope Guilty (6 comments total) 4 users marked this as a favorite
I liked this a lot. The photos were very well done, and I found them genuinely scary. The only part I wasn’t quite sure I liked was the very end where they showed that the survivor had became sort of a folk hero after he was executed.
posted by holborne at 2:35 PM on January 16, 2022

My issue with it is really the bit at the end where they basically lay out that Sangre de Cristo was just the first of several attacks with the monsters heading north and continuing to come from the south; the film quite rightly invites us to be repulsed by the people who demand a wall to keep future Francisco Salazars out, but undermines that by establishing that there actually is a threat that one might reasonably demand a wall to keep from coming north. I think it's unintentional- a bit of spooky ending that they just didn't think enough about, thematically- but it does kind of muddle an otherwise outstanding film.
posted by Pope Guilty at 9:29 PM on January 16, 2022

This was pretty good. And thank you for the YouTube link Pope Guilty. Watching this alongside Archive 81 was interesting because they're both, I guess, diegetic found footage? Probably not the right term. I suppose all found footage scenarios could be considered diegetic, but it's more conventionally presented directly to the viewer instead of experienced by the characters.

I'd be curious about people's interpretations of the ending since I think it was intentionally a bit ambiguous. Mine was:

I love found footage myself but the "fake documentary" subgenre seems rare- I can think of this, Lake Mungo, and Koji Shirashi's Occult and Noroi (itself my favorite FF movie) as movies that are presented as actual documentaries rather than as "we found this footage and maybe edited it into something that makes narrative sense". I really enjoy the format and would love to see more!

As to your reading, I didn't pick that up at all but it makes sense, especially given Salazar going silent after the interrogation- it was already slowly happening.
posted by Pope Guilty at 12:45 PM on January 21, 2022 [2 favorites]

There are a couple of other fake documentaries I can think of right offhand, and I don't think they’re actually rare, at least not anymore. What We Do in the Shadows is one. Butterfly Kisses is part found footage, part fake documentary (mostly the latter), as are The Taking of Deborah Logan and Digging Up the Marrow. Hell House, LLC is also a hybrid, although that one is mostly FF, I guess.
posted by holborne at 9:56 PM on January 23, 2022 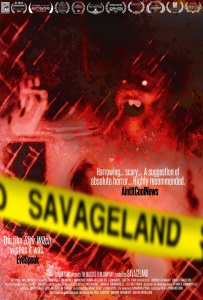