The Legends walk into a bar and take a chance on Sara Lance.


Since we skipped posting about the previous episode, discussions about the reality TV show themed episode are also welcome.
posted by sardonyx (4 comments total) 1 user marked this as a favorite
First, I know I'm an old but that was not a film strip. Sheesh! Time travellers should have more familiarity with outdated technology like that!

I have no idea why Thawne looks like Thawne here and not Harrison Wells (i.e. Tom Cavanagh) when we just got a Thawne as Wells arc on The Flash. There is no way to even attempt to juggle canon across the Arrowverse these days. I'm not even going to try. At this point I'm ready to cover my ears and sing "la-la-la, I can't hear you," to myself whenever any of these shows even try to reference anything continuity related. (Also, they were telegraphing that "speedster vibe" pretty hard and fast before they even encountered Thawne with all that "we need to be able to stop time" business.)

That was a nice bit of bonding between Fancy Zari and Spooner. And once again, Legends says "no big deal" to showing ways in which people can be diverse. No fanfare, no special episodes, just people being people, and figuring themselves out. Nice job Legends. It will be interesting to see how Spooner develops as a character now that she'd got this new perspective about herself.

Nate's drawing was a masterpiece. And no, I don't think the car looked like a hippo, and I didn't see what they meant by the bomb looking like lettuce on a sandwich.

They really need to tone down Gwyn's highlights. That's way too much for somebody with his personality coming from the time he does. Step away from the bleach and the hairdryer!

It was pretty obvious at the end of the previous episode that they weren't actually going back to prevent the assassination but that they were hoping to lure the evil robots to a specific time and place that would attract their attention, but that doesn't mean the idea wasn't a good one (or as "good" as Legends ideas ever are).

Speaking of last episode, that was a lot of fun. I didn't get that Sara was supposed to be a Housewife, but I've never seen any of those shows. I just thought she was another Jersey Shore type (which, again, is a show I've never seen, but Nate was so obvious, that I thought she was his female counterpart).
posted by sardonyx at 5:40 PM on January 27, 2022 [3 favorites]

ALL THE HUGS FOR GWYN. All of them. Poor sweet guy.

I do not and have never watched reality shows -- just not my thing, no onus -- and that ep still had me hooting. Nate especially devolved in an amusing way.

SPOONER! I agree that the low-key taking-it-in-stride was absolutely the way to play it, completely accords with my own realization of the same thing a few years back. Fancy Zari's explanation was a little as-you-know-Bob, but I don't mind that; I'm sure a lot of viewers learned a thing from it. Thank you, writers' room, Lisseth Chavez, and Tala Ashe.

I'm seeing hints of Spooner being just a tiny bit jealous of her bff's new beau. We'll see where that goes. I'm not actually a giant fan of this pairing, despite enjoying both characters and both actors. Behrad sanding down Astra's delightfully sharp edges would be a genuine shame and a loss to the show.
posted by humbug at 5:32 AM on January 28, 2022 [2 favorites]

I loooooved the Spooner reveal. I know a lot of fans of the Astra/Spooner ship are a bit sad about it, though. I did not mind Zari giving the info download on the topic because there are a surprising number of people who don't know asexuality exists. I wonder how many people saw that and suddenly sat up and said, "Hey, that's me!"

I really like the Gideon and Gary vibe! Loved when she ordered two beers and said "What are you having?" Gideon is fabulous and I'm glad she is a person now. And I'm also really enjoying how they are making microadjustments to Gary's personality to pull back on the buffoonery.

I could not be more happy about how they are handling Gwyn's plot. Rather than having him immediately resolve his inner conflict between his sexuality and spirituality, they make it clear it's not easy. And oh, gentle kind Ava is the perfect person to be talking to him. I'm glad we get to see this side of her.

I'm also really loving the Sara/Nate dyad. We get to see Nate be smart, Sara kick ass, and Nate be her cheerleader. I'm glad they are letting Nate be a historian again; I missed it.

Not so much from Astra and Behrad this episode, but that's OK, they had a big one last week. They are totally a Grumpy/Sunshine couple and I am HERE for it.

I loved the trio that started out giving them crap and ended up supporting them. Like, a LOT. I'd enjoy seeing them appear again. The white-haired guy's makeup definitely owed a lot to the Stargate Atlantis Wraith species.

Haven't watched Flash in years, so having Thawne arrive was a hoot for me.

This season may be my favorite season yet. And it definitely shows that they have enough creativity to go for more seasons. Stepping back from "end of the universe" stuff was the right choice - and they could do another season with similar stakes and I would be 110% on board.
posted by rednikki at 12:59 PM on January 30, 2022 [4 favorites]

Gwyn's highlights are Constantine trying to re-emerge.
posted by under_petticoat_rule at 6:00 AM on February 1, 2022 [3 favorites] 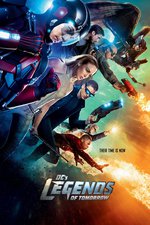