Burnham and Owosekun catch up to Book and his jerk Risian buddy, but if they're going to stop them from getting the unobtanium that they need to make their big bomb-thing, they're gonna have to play the hand they're dealt--and we're not talking about fizzbin.


Memory Alpha once lost their shirt on the Karma Barge, but nobody minded:

- This seems to be the first appearance of a Founder-type changeling in Trek since the series finale of DS9 (not counting Holo-Odo in a PRO episode recently); no idea what that implies about the Dominion in the 32nd century. (It could be one of the dispersed changelings like Odo that were sent out in the galaxy by the Great Link.)

- A number of the regulars don't appear in this one; Owo makes up for it by getting some good asskicking scenes in. (Maybe she studied Tsunkatse?)

- The face cards used in the poker game depict various alien species, including an Arcadian as the queen.

"Not that I mind. Each to his own, her own, their own, all the things."

Deep down Book must know that he is being lied to, that Risen is telling him whatever he wants to hear, yet as long as it aligns with Books own 'must save everyone' fixation he goes along with it.

Also - worryingly - I suspect Risen doesn't think this is a suicide Mission, but Book definately does.
posted by Faintdreams at 4:19 PM on February 10, 2022 [1 favorite]

The guy who played  Maz Kanata  Haz Mazaro looked and sounded really familiar to me, but I don't think I truly remembered him. He had a small role in a season 3 ep.

My gut says they're gonna turn out to be at least half-wrong about the "mining" theory.

I'm pleased by this episode's limited focus and more balanced…emotional register, I guess? And I'm about as pleased that this season appears willing to address one of canonical Trek's most bizarre features: the galactic barrier. Well, one of them.

If I may speculate wildly? Odo joining the Link, apparently for good, at the end of DS9 would doubtlessly have resulted in some pretty profound shifts in the Founders' collective worldview. One such shift could well have been a collective choice to send more individual Linklings out beyond the Dominion. As we saw with Laas, some didn't adjust too well to life apart from the Link, and if those who chose to leave were deprived by the Burn of their ability to go home for a restorative dip, well, a life of crime is a plausible outcome.
posted by CheesesOfBrazil at 5:31 AM on February 11, 2022 [3 favorites]

There are other shapeshifting species in Trek who aren't the Founders.

Something that someone pointed out elsewhere: boronite was first established in VOY as a way of making Omega particles.
posted by Halloween Jack at 8:11 AM on February 11, 2022 [2 favorites]

(And, yes, the use of the word "Changeling" does kind of imply the Founders, but I'm hoping that's not the case)

It was pretty clearly a Founder from the face makeup.
posted by rhymedirective at 9:23 AM on February 11, 2022 [5 favorites]

Also, I'm going to start using "Stop acting like an Armus!" when people are getting out of pocket.

The sad thing about it in the context of a serious series that takes place a jillion years in the future is that it introduces the possibility that (A) Armus was not in fact left to exist forever alone in obscurity, if people are still invoking his name, and/or (B) the civilization that created Armus to house all their hate actually created a bunch of them because I guess they were that full of hate, like some a galactic hate-franchise. Armus-Fil-A, if you will.
posted by CheesesOfBrazil at 2:26 PM on February 11, 2022 [3 favorites]

Also, I'm going to start using "Stop acting like an Armus!" when people are getting out of pocket.

I loved they way that Haz just kept spewing idioms to which we have no referents. This is peak Star Trek and why I still tune in.
posted by mikelieman at 3:40 PM on February 11, 2022 [5 favorites]

Enjoyed this episode! I missed my Trek. Honestly the plot had all the same problems that have annoyed me all season; going to gambling town and fighting and playing poker to win something important is a very, very worn out trope. But they executed it really well and I enjoyed it.

Sometimes I think Sonequa Martin-Green is carrying the show on her back. Oladejo was good too although I wish they'd given her some sort of writing to set up her scam in the MMA ring. She should have at least let Michael know what she was up to. Or are we supposed to believe she found some hidden reservoir of strength after having the crap beaten out of her twice?
posted by Nelson at 7:13 AM on February 12, 2022

I assume that off-screen they planned for Owosekun to throw the first two fights; without getting those sweet 45:1 odds they wouldn't have had the money they needed, so winning the first two wasn't the way to go. On the other hand, I'd have expected the house to be very angry about paying off on what was clearly a rigged fight, not just kind of resigned to it.
posted by the antecedent of that pronoun at 7:58 AM on February 12, 2022 [6 favorites]

I think that it's more likely that Owosekun won the third match after figuring out how her opponent fought, and how to fight in a match that is instantly over once one of them hits the mat. (That rule probably kept her from really getting the crap kicked out of her.) Their complaint about being sharked is just sore loserdom; if you want to keep from being sharked, either stifle your overconfidence or don't play for money.
posted by Halloween Jack at 10:32 AM on February 12, 2022 [2 favorites]

think that it's more likely that Owosekun won the third match after figuring out how her opponent fought, and how to fight in a match that is instantly over once one of them hits the mat.

Of course, I'm pretty sure that throw technique she used to win resulted in her... hitting the mat first, and flipping fucko over her.

So she probably should've lost.

Either reading of the fight setup is valid, though, because neither of them is actually supported in any way by the actual writing on the show. It could've been a setup, she could've dug deep and figured it out... we'll never know!
posted by coriolisdave at 4:08 PM on February 12, 2022 [3 favorites]

Just as an aside, in light of Discovery S3, it was interesting to read peoples musings about "what if no warp travel" in the VOY Omega Directive thread linked above.
posted by the antecedent of that pronoun at 9:14 AM on February 13, 2022

The guy who played Maz Kanata Haz Mazaro looked and sounded really familiar to me, but I don't think I truly remembered him. He had a small role in a season 3 ep. 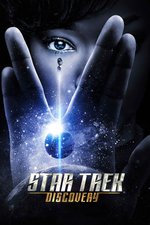