The picture was directed by Robert Wise and produced by Harold Hecht. The title refers to "silent running", a submarine stealth tactic. The story describes World War II submarine warfare in the Pacific Ocean, and deals with themes of vengeance, endurance, courage, loyalty, and honor and how these can be tested during wartime. (wiki)

Clark Gable was ill during filming, and his head violently shakes in several scenes. It is believed his shaking was caused by his chronic alcoholism and smoking four packs of cigarettes a day, although there were rumors he had Parkinson's disease.

Director Robert Wise observed that while Clark Gable was a highly professional actor, he didn't want to work past 5:00 pm because "at this stage in his life, he was tired and wrung out by five". (imdb)

The plot of Star Trek episode "Balance of Terror" is based on The Enemy Below (1957), with the Enterprise taking the part of the American destroyer and the Bird-of-Prey with its cloaking device taking the part of the submarine. This episode was also partly inspired by another World War II Submarine Drama, Run Silent Run Deep (1958), which was directed by Robert Wise, who would later direct Star Trek: The Motion Picture (1979). (imdb)
posted by valkane (4 comments total) 2 users marked this as a favorite
Can be watched for free (with ads) on YouTube as of 2/16/22.
posted by valkane at 7:04 AM on February 16, 2022 [1 favorite]

This is one of the classic sub movies One of mu favorites. I've read the book too and it is good as well. Clark and Burt have good chemistry as the captain and his XO. If you're not familiar with the genre, give this one a go as a start.
posted by Fukiyama at 5:21 PM on February 16, 2022

Hey, that was pretty good! Watched it on YouTube with an ad blocker. It looked great and had some standout acting. No maudlin stuff and not many clichés. Tight story with no filler. Sure, it's dated with a running sexist gag and language about the enemy. I appreciated that they let the Japanese sailors speak with no subtitles.

Gable did indeed look pretty rough in this—even before he got the concussion in the story—but he had screen charisma for sure. Don Rickles was great in this too. Have to say I also enjoyed Burt Lancaster. I'm not an old movie buff so this is the first film I've seen him in. The VFX were done really well.

I was astounded that people smoked aboard submarines so I looked it up. The US Navy only fully banned smoking on submarines in 2010!

I don't usually watch war flicks, but I really enjoyed this despite the death and destruction. Thanks for the recco.
posted by SoberHighland at 1:10 PM on February 17, 2022 [1 favorite] 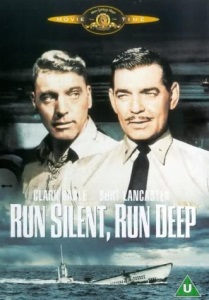