A prickly judge who despises juvenile criminals arrives at a juvenile court, where she takes on a complex role examining punishment for young offenders.

The Review Geek Season 1 Review – A solid law drama that fizzles out at the end: "Juvenile Justice is a decent law drama, depicting thought provoking and hard-hitting case around several interesting and complex characters. While the show slips up a little with its editing and jumping between cases, there’s enough here to make for a really compelling show nonetheless. The story centers on modern Korea, with the juvenile act in effect. This means any crimes committed by minors can usually be wrapped up without any serious types of punishment. Unfortunately, the knock-on effect to this means offenders are committing more violent and cruel crimes."

Ready Steady Cut review – complex courtroom drama with a lot of issues: "I don’t subscribe to the belief that all TV shows need a “likable” protagonist, but most need a clear point of view. Kim Hye-su delivers a tremendous performance here that the writing doesn’t always support, and the tendency for the script to devolve into preachy monologues does the whole thing a disservice. There’s interesting interplay between the show’s procedural and more serialized elements that makes the entire season dump an intriguing decision, but its overall tone can be grating in large doses, and it might have been better suited to the usual twice-weekly distribution that Netflix employs for most of its k-drama slate. Either way, there’s an interesting season of television here, just one that can’t quite live up to its full potential."
posted by oh yeah! (1 comment total)
Just finished watching this series. I agree with the 'Ready Steady Cut' reviewer on there being problems with the writing, and I don't think it's an issue of clunky subtitling as is often the case with Netflix from what Korean-speaking reviewers often note. There were a lot of exposition-dumps, of characters doing that "As you know [insert fact that both characters would know and not need to say to each other]" thing. I don't know that there's a non-clunky way to get around it, short of having one character being brand-new to working in the court to be there just to ask all the dumb layperson questions.

It's a "ripped from the headlines" kind of show that probably hits harder when one knows the actual headlines and statistics that it's alluding to. There were a lot of good performances and heart-wrenching sequences. I don't regret watching it, and I don't think I agree with the 'fizzles out at the end' assessment by Review Geek. I do agree that it's a flawed series though, just not sure exactly what it needed to be less flawed.
posted by oh yeah! at 5:52 PM on March 1, 2022 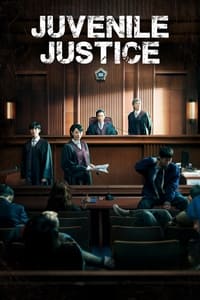