A gang of young thieves flee Paris during the violent aftermath of a political election only find themselves in far more danger at an isolated hostel in the countryside.


This film is essentially a reworking of the Texas Chainsaw Massacre, but tied into the political upheaval in France during the 2002 presidential election. A rise in right-wing nationalism prompted Xavier Gens to write Frontier(s). He was inspired by Jean-Marie Le Pen and the National Front gaining nearly 17% of the vote during the 2002 French elections. The result was a film about four young muslims escaping Paris during riots in the aftermath of an election only to find themselves captured by neo-nazis living in the French countryside.


While it only garnered a 55% score on Rotten Tomatoes, positive reviewers like C.H. Newell note how the film managed to effectively incorporate its political message with brutal gore.
posted by miss-lapin (3 comments total)
Currently streaming on Shudder.

This film is a far more fitting tribute to the original Texas Chainsaw Massacre than the movie on Netflix. This is particularly true of the raw brutality of the film.

Gens would go on to direct the even more brutal and depressing film the Divide about nine New Yorkers trapped in the basement of their apartment building after a nuclear blast.
posted by miss-lapin at 1:34 AM on March 2, 2022 [3 favorites]

I'm thrilled at the French stuff Shudder has added. I haven't seen this in over a decade, but I'm excited to take another look.
posted by kittens for breakfast at 10:28 AM on March 2, 2022 [1 favorite]

Definitely I'm thinking of doing something I never thought I would which is rewatching martyrs.
posted by miss-lapin at 11:07 PM on March 2, 2022 [1 favorite] 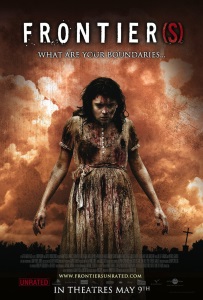