Two melancholy Hong Kong policemen fall in love: one with a mysterious female underworld figure, the other with a beautiful and ethereal waitress at a late-night restaurant he frequents.


Every day, Cop 223 (Takeshi Kaneshiro) buys a can of pineapple with an expiration date of May 1, symbolizing the day he'll get over his lost love. He's also got his eye on a mysterious woman in a blond wig (Brigitte Lin), oblivious of the fact she's a drug dealer. Cop 663 (Tony Leung Chiu Wai) is distraught with heartbreak over a breakup. But when his ex drops a spare set of his keys at a local cafe, a waitress (Faye Wong) lets herself into his apartment and spruces up his life.

Roger Ebert: Both of these stories, about disconnections, loneliness and being alone in the vast city, are photographed in the style of a music video, crossed with a little Godard (signs, slogans, pop music) and some Cassavetes (improvised dialogue and situations). What happens to the character is not really the point; the movie is about their journeys, not their destinations. There is the possibility that they have all been driven to desperation, if not the edge of madness, by the artificial lives they lead, in which all authentic experience seems at one remove.

Tarantino loved this movie so much, indeed, that he signed a deal with Miramax to start his own releasing company, and his first two pick-up deals are "Chungking Express” and another Wong Kar-Wai film. There's a lot of interesting Hong Kong films right now, but it centers more on commercially oriented figures like John Woo and Jackie Chan. Wong is more of an art director, playing with the medium itself, taking fractured elements of criss-crossing stories and running them through the blender of pop culture.

When Godard was hot, in the 1960s and early 1970s, there was an audience for this style, but in those days, there were still film societies and repertory theaters to build and nourish such audiences. Many of today's younger filmgoers, fed only by the narrow selections at video stores, are not as curious or knowledgeable and may simply be puzzled by "Chungking Express” instead of challenged. It needs to be said, in any event, that a film like this is largely a cerebral experience: You enjoy it because of what you know about film, not because of what it knows about life.

Janet Maslin: Lurching, vertiginous camera work is one hallmark of Wong Kar-wai's "Chungking Express," a film from Hong Kong with a tirelessly capricious sense of style. While its slender, two-tiered plot links love affairs that happen largely by accident, the film's real interest seems to lie in raffish affectation. Mr. Wong has legitimate visual flair, but his characters spend an awful lot of time playing impish tricks. A film in which a man talks to his dish towel has an overdeveloped sense of fun.

Beyond the Mamas and the Papas, "Chungking Express" is filled with global-village references to fast food, video, convenience stores, Bruce Willis and Demi Moore. While Mr. Wong's visual energy harks back to early New Wave experimentation, it also has a substantial rock-video component, which suggests that the detritus of mass culture has a way of coming home to roost.

James Berardinelli: Those expecting Chungking Express to offer a "typical" Hong Kong film experience (kung fu) are in for a surprise. While much of the camerawork is kinetic, the film contains very little traditional action. This is basically a character-based motion picture fueled by thematic explorations instead of a fast-moving plot. Wong uses Chungking Express to examine the similarities and differences in the ways human beings communicate.

In any given day, each person comes into contact with dozens, if not hundreds, of others. Many are simply men and women we pass on the street. There's no interaction other than the occasional meeting of eyes. Consider, however, that each face conceals a life's tale. How many of those stories are similar, and how many are truly unique? This is the focus of Chungking Express. Wong believes that, while every person's narrative has a percentage of singular elements, there's always a certain commonality that falls under the broad umbrella of the "human experience." Aspects of life break into often-repeated patterns, whether the subject is a Hong Kong gangster, a Russian farmer, or an American businessman.

The loneliness of both male protagonists is palpable, and the females are each seduced by the lure of American culture. The object of Qiwu's desire dresses like a femme fatale out of a '40s movie and spends much of her time in a bar where everyone speaks English. Faye talks about moving to the United States and is forever playing her favorite song, "California Dreamin'." While the two stories are separate, the crisscrossing of themes and common elements can confuse inattentive movie-goers. Chungking express requires unflagging vigilance.

Like John Woo, Tsui Hark, and other directors who learned their craft in Hong Kong, Wong infuses his films with style and energy. His hand-held camera is restless, always moving and shifting. The action sequences are punctuated with unusual shots and stop-motion jumps. By filming Chungking Express in such rich, vibrant manner, the director uses visual images to underscore his themes. Once the viewer gets past bouts of confusion (the film demands more than one viewing), the result is a uniquely memorable look at the ties that bind all people, as presented through two deceptively simple stories.

Trailer
posted by Carillon (13 comments total) 5 users marked this as a favorite
I just discovered this is available on the Criterion Channel in the US, after several years of not having a legal way to watch (the Rolling Thunder DVDs have been out-of-print for a while, and are very expensive now). I'm planning to sign up and give this a re-watch soon.
posted by Alterscape at 5:52 PM on April 9 [1 favorite]

FYI, this is included in Criterion's recent "The World of Wong Kar-Wai" bluray set.
posted by praemunire at 6:21 PM on April 9 [4 favorites]

It's really good. I dunno how much sense it makes, but I really felt connected with the characters and I thought each story was very evocative. The camera shots alone though are worth the price of admission. The shot of the pager on the athletic field fence for one was amazing. There are so many ways to capture different shots, but the ones he chooses are awesome.
posted by Carillon at 6:42 PM on April 9

When I tell people this is my favorite movie, and they ask what it's about, I don't really know what to say, but I'll be like isn't this cover of "Dreams" the best?
posted by dogstoevski at 7:07 PM on April 9 [5 favorites]

I've described it as "Well, half of it is like Amelie, if Amelie were sort of a gangster movie and featured Faye Wong singing the Mamas and the Papas."
posted by Alterscape at 7:29 PM on April 9 [2 favorites]

The opening too is so disorienting, it's pretty special thinking about how they just throw you into things. I also like that your not sure what's up with woman in a blonde wig until you finally see the powder.
posted by Carillon at 7:47 PM on April 9

When I tell people this is my favorite movie, and they ask what it's about, I don't really know what to say, but I'll be like isn't this cover of "Dreams " the best?

I will love this movie until I die, but it's also a super embarrassing movie to rave about now that I'm in my 30s. It feels like it reveals a little too much about my romantic sadsack tendencies (because I'm now old enough to camouflage them pretty well).
posted by grandiloquiet at 11:40 AM on April 10 [4 favorites]

I only saw this recently. It's so of the 90s! It's a bit slippery. It really savors its sentiment, and that's impressive, but it's also so shallow. I liked it but I don't think I could ever sit through it again.
posted by fleacircus at 4:59 PM on April 10

I love this movie. All four leads are great, and Faye Wong in particular is charming.

This is in the very small set of films that made me sink back into my seat and go, "Ahh...I have not idea what is happening, I don't think that's the point, I'm just gonna watch..." and I was so rewarded. I really like how the medium of film, art, and poetry, can sometimes just capture some fleeting human enormity of emotion, some view, so well.
posted by winesong at 8:08 PM on April 11

Rewatched this tonight. It holds up, and it led to a half hour discussion afterwards with my wife. Lands different in my late 30s than it did at 19, but still amazing cinematography. Also a little bittersweet, in that a college friend’s father, who passed away a few years ago, composed the score for the strings. I never knew him but I heard stories and I heard about his passing, so, you know, interesting to hear that material again now.

The second half, which I really liked originally, feels a bit creepier now. Especially Faye dosing 663’s water with sleeping pills. The rest is a little weird and violating, but that’s really weird. In general I still can accept that it’s a movie with movie logic where Faye Wong is the Manic Pixie-Cut Dream Girl and this is supposed to be cute, but it was more cute and less cringe when I was younger.
posted by Alterscape at 9:02 PM on April 12 [1 favorite]

Ditto on favorite movie movie status and comparisons to Amelie (another favorite). Why yes, I do have a thing for Manic Pixie Dream Girl running around doing fairy level mischief. Haven't seen it since around when it came out.

Thanks for the "Dreams" link dogstoevski. I also remember it having great music all around.
posted by zengargoyle at 7:44 AM on April 15 [1 favorite]

This shot is just amazing.
posted by the duck by the oboe at 4:35 PM on April 17 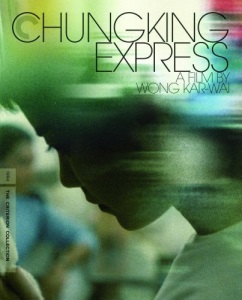