S3 is, again, much improved over the first season, and is currently at a 100% rating from Rotten Tomatoes. It has a direct sequel to MeFi's Own jscalzi 's "Three Robots" from S1, with more topical references and a sweet, sweet punchline at the end. E3, "The Very Pulse of the Machine", is adapted from a Hugo-winning short story by Michael Swanwick, and is simply beautiful. The last one, "Jibaro", was done by Alberto Mielgo, who also did "The Witness" in S1, but this one is very different (and not fanservicey).
posted by Halloween Jack (24 comments total) 1 user marked this as a favorite
It was pretty good as they mostly have been so far, but feels like it leans even further into horror.
Mason's Rats was over the top in violence, but faithful to Neal Asher's oeuvre.
The Swarm had a particularly unpleasant ending for an interesting premise.
Jibaro was a bit weird and disorienting, and no laser pistols in sight.
posted by Marticus at 8:56 PM on May 22 [2 favorites]

Jibaro was the only story in this batch not adapted from a short story. A lot of people seem to think that it's the also the weakest of the batch. My favs were Very Pulse of the Machine, and mini-dead, which I've both rewatched. Overall, I thought that this season was better than season 2, which was a step down from 1. For some reason, 3 robots didn't grab me this time.
posted by Spike Glee at 10:07 PM on May 22 [1 favorite]

Yeah, they leaned a bit heavier on the horror and gore this go around. From a technical and aesthetic standpoint, Jibaro feels next level. In fact, I kept getting pulled out of the experience with thoughts of "That can't possibly be all CG?" The Very Pulse of the Machine was also at the top of the bunch, the animation style matching perfectly with the story. With the Netflix stock crash and cuts to their animation staff, I wonder if this is the last season of LD&R. Would be shame.
posted by gwint at 11:18 PM on May 22 [2 favorites]

My #1 vote goes to Very Pulse of the Machine, and the weakest were the two soldiers fighting monsters episodes. Such a cliché.
posted by qxntpqbbbqxl at 12:55 AM on May 23 [1 favorite]

I was pretty lukewarm on S1 in spite of liking several of the episodes, just because of the generous amount of edginess (mostly in the form of graphic violence and overt/implicit misogyny) laced throughout pretty much every episode that wasn't based on a Scalzi story. When it worked, it worked great, but there was so much tonal whiplash throughout the series that on the whole I didn't find it enjoyable. Can anyone tell me if they've pulled back on these edgebro tendencies at all in the last two seasons?

I'm not altogether encouraged by the return of Alberto Mielgo to S3; I've only seen two of his shorts (S1's The Witness and the Oscar-winning The Windshield Wiper) and both of those left me with a real queasy feeling about the guy who made them, some real "we live in a society" vibes.
posted by Strange Interlude at 7:17 AM on May 23 [3 favorites]

Strange Interlude , given your tastes, you might want to just watch The Very Pulse of the Machine and skip everything else.
posted by gwint at 7:29 AM on May 23 [2 favorites]

No, they did not pull back on the edgebro sensibility.
posted by Karmakaze at 12:07 PM on May 23 [2 favorites]

Jibaro is like nothing else I've ever seen. I absolutely love the balletic movements - especially by the knight in the final sequence.
posted by tuffet at 9:33 PM on May 23 [5 favorites]

Yeah, they leaned a bit heavier on the horror and gore this go around.

Heavier? I couldn’t finish the first season because of the gratuitous over-the-top violence and bloodshed. Geez.

Maybe someone with a stronger stomach than I could provide a handy synopsis of which episodes are more on the less-gory/violent side of things?
posted by Thorzdad at 4:06 AM on May 24 [1 favorite]

Tuffet - agreed! Jibaro was just visually breathtaking. And the CGI was so good that I would stop and say to myself “wow, that woman is making really good physical acting choices” - then I’d have to remember that, well, not exactly. But the sheer expressiveness of these CGI characters is something else.
posted by Mr. Excellent at 8:54 AM on May 24

Maybe someone with a stronger stomach than I could provide a handy synopsis of which episodes are more on the less-gory/violent side of things?

The Very Pulse of the Machine - visually gorgeous, only one death. Good story.

I think that's it, actually. Like all the seasons of this series, lots of violence & gore, some beautiful animations, and some interesting ideas. My thoughts overall:

-Three Robots: Exit Strategies: nice to see these three again, but it didn't click with me the way the one in S1 did.
-Bad Travelling: I liked this one; creepy and unsettling, though it didn't contain many surprises.
-Night of the Mini Dead: Cute idea, didn't go on any longer than needed.
-Kill Team Kill: Meh - over the top gore, and the humor did not work for me. Extended piss take at the start just set the tone I guess.
-Swarm: Intriguing idea, but it felt to me like this one ended right when it was about to get started.
-Mason's Rats: started humorous, became poignant. Enjoyed it more than I expected once I knew the premise - the usual outcome of these stories is not the two sides making peace instead of escalating technological terror.
-In Vaulted Halls Entombed: Very Lovecraftian, did not need the soldiers being quite so dudebro about killing the people they were after, while standing in front of a inexplicable structure and after having been attacked by carnivorous face-beetles.
-Jibaro - the most visually stunning story, perhaps the most unique. This one is lingering with me.
posted by nubs at 12:45 PM on May 24 [2 favorites]

I think you just have to accept that it's now established practice that most of these will be mediocre and one or two will be standouts.
posted by His thoughts were red thoughts at 5:04 PM on May 24 [1 favorite]

Jibaro was the only story in this batch not adapted from a short story. A lot of people seem to think that it's the also the weakest of the batch.

WHAAAAAAAAAAAAAAAAAAAAT? It was STUNNINGLY gorgeous and weird.
posted by EmpressCallipygos at 8:12 PM on May 24 [4 favorites]

I liked this season less than 1 and more than 2.

I found that Alastair Reynolds (a fave) and Neal Asher (not always a fan) do seem to be more similar on the horror scale than I would have thought. I try to track down the original stories for all of these but I couldn't find the original to "Bad Traveling". It's the same world as "Jable Sharks" which was better than average Asher, IMO.

To me this worked out well with stories from established authors, different animation companies, directors etc.

Swarm was great. Felt like a short story in a big universe. Reminded me of Peter Watts a bit.

I'm defo on team Jibaro too. I liked the look and the wordless storytelling though I could see how some might not.

I appreciate short length. Long shows with many seasons seem like too much investment for the payoff. Not all of the stories were great but I never felt they wasted my time too much.
posted by jclarkin at 9:09 PM on May 24 [1 favorite]

Jibaro was very pretty but also (to me) telegraphed every story beat miles ahead and spent easily as much time wallowing in sexual violence, sexualized violence, and gore as it did either giving us fresh visuals or ideas. I gather that it may resonate better with people from Central America where some of the religious and cultural symbols will hit more viscerally. I went and read some of the explanations to see if I'd been missing something and, no, I caught the themes and story as intended. It's just that, just as the over-the-top military snuff episodes represent well-tread edgebro territory, I've seen enough lovingly detailed sensual rape allegories to last a lifetime. I get that this is a horror anthology but "colonizers are greedy rapists" is not exactly a hot take.

You can really tell that practically no women were involved in any part of this series. The count, btw, is as follows:
author: 2 - "Sucker of Souls" "Helping Hand"
scriptwriter: 1 - "When the Yogurt Took Over"
director: 3 - "Pop Squad" "The Very Pulse of the Machine" "Kill Team Kill"

I'll admit to being surprised that "Kill Team Kill" is on that list, but it's still a very short list.
posted by Karmakaze at 9:25 AM on May 25 [1 favorite]

Also, the very end of Night Of The Mini Dead reminded me of FishBike's Scale Of Big Mistakes.
posted by EmpressCallipygos at 11:57 AM on May 25

I am fairly certain Night of the Mini Dead was either 100% or at least 80% just recreated scenes from other zombie material.

I caught scenes from Train to Busan and it's sequel, one of the resident evil games, Zach Snyder's Dawn of the Dead.

A few others looked super familiar but I couldn't place them exactly.
posted by M Edward at 1:50 PM on May 25

spent easily as much time wallowing in sexual violence, sexualized violence, and gore as it did either giving us fresh visuals or ideas.

I feel like we watched different versions of Jibaro. I watched an anti-colonial fantasy where a goddess destroyed the priests and an army of colonizers except one, using only her voice and movement. And eventually she destroys that one by taking away his disability, a disability that protected him. Who was violent to whom?

And it was visually stunning and inventive. I wasn't miles ahead of the beats, I was in awe of the beauty of nature, movement, and form. I had no idea what the next frame would be, but I eagerly anticipated it.
posted by Stanczyk at 4:47 PM on May 25 [5 favorites]

Did the part where he betrayed her trust to get a chance to beat her unconscious and then tore away her treasure until she was left naked and bleeding not read as a rape metaphor to you?

I'll grant that the story beat I didn't see coming was that the healing nature of her blood would restore his hearing. There's something in the way that having a gift of healing horrified him in a way having his hands and lips torn did not.
posted by Karmakaze at 11:35 AM on May 26 [1 favorite]

She was not naked. She was without her gold and jewels. And she snuck up on him when he was asleep and fell asleep wrapped around his sleeping body.
posted by Stanczyk at 2:05 PM on May 26

I read that scene in Jibaro as an animal ripping into meat, like a scene from a nature documentary of hyenas eating a water buffalo that's still alive and stuck in mud. It didn't come off as sexual to me, but as a feeding.

The director has stated they meant the metaphor to be two people who are drawn to a relationship to each other, but are toxic to one another.
posted by Dynex at 9:38 PM on May 26

It also reminded me of scaling a fish.
posted by Stanczyk at 5:38 AM on May 27

Wow, cgi and animation really knows how to depict blood, bone, and gore.
posted by Brandon Blatcher at 6:55 AM on May 27

For those interested, Netflix has released (on YT for some reason) two "inside the animation" mini-docs: 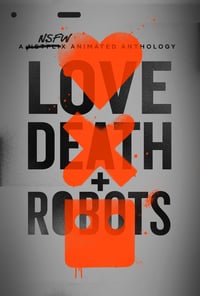