An expatriate British publisher unexpectedly finds himself working for British intelligence to investigate people in Russia.


While visiting Moscow, British publisher Barley Blair (Sean Connery) learns of a manuscript detailing the Soviet Union's nuclear missile capabilities. British intelligence and the CIA consider the book to contain crucial information and recruit Blair to investigate its editor, Katya Orlova (Michelle Pfeiffer). As Blair learns the origin of the manuscript and discovers Russian military secrets, he falls in love with Katya and fights to protect her family.

Roger Ebert: And so what develops is one of those infinitely gentle, sad le Carre plots in which men who have worked too long within the mole tunnels of intelligence come out into the sunlight and stand, blinking and disoriented, in the glare of beauty, romance, truth and fresh air. All of which needs to be talked about a great deal, especially by men who have been spies too long. These include the Americans (Roy Scheider and John Mahoney) who take over the case from the impotent British.

The movie has been perfectly cast. Having read the book, I knew that Barley would have to be Sean Connery or perhaps Michael Caine (John Hurt would have been good, but is not a box office name).

Michelle Pfeiffer makes a splendid Katya, with her hair pulled back to accentuate her vaguely Slavic cheekbones. Klaus Maria Brandauer of course gets all substantial male Russian and Eastern European roles these days, with his sleek and slightly sinister intelligence. And James Fox, as Ned, the Brit master spy, provides that precise note of cold British analytical reserve that is required.

So all is in place for an effective movie, except for a screenplay in which anything happens. The director, Fred Schepisi, has obtained the playwright Tom Stoppard to make le Carre's novel into a film, but what it has been made into is sort of a filmed dramatic reading, with endless variations of shots in which middle-aged men stand around saying le Carre's dialogue.

Dennis Schwartz: The plot was needlessly made complex by keeping things muddled, and the rosy ending was a bit of a stretch. But despite all its low points, it was still entertaining and makes a point that one can’t repeat often enough of how the cold-blooded bureaucratic men in the grey suits keep the arms race going above the clamor of those who want the world to act more rationally when it comes to weapons of mass destruction.

Director Ken Russell has a spicy part as a busy Brit spook Soviet code expert, who walks off with supporting actor honors. Pfeiffer proves she can act subdued and makes the most of her part as the straight-arrow family woman Connery falls for in an adult way. Other supporting actors fare less fortunate because their parts leave them without much to do or say, such as J. T. Walsh’s sinister one-dimensional Colonel Quinn.

Hal Hinson: Even with all these spider-webbed plot details to sort through, "The Russia House" is more character-centered than most spy thrillers. Much of the film's action, such as it is, takes the form of interrogations, and Schepisi has turned them into tense verbal chess matches. It helps, of course, that the actors play their pieces brilliantly. Connery's Barley is a malt-cured reprobate with hipster tendencies who's gone his own way without much in the way of responsibilities or, for that matter, achievements. Barley is a shambles, like his beloved Russia, but he's his very own shambles. When the spooks grill him, he knows he has nothing to lose and turns their questions back on them with hilarious panache.

Added to this, "The Russia House" has visual pleasures far beyond those of most thrillers. Some of this can be attributed to the heroic shots of Moscow and Leningrad (the film is the first American production to be shot inside the Soviet Union), but Schepisi and his longtime cinematographer, Ian Baker, also find imaginative ways to shoot even the most mundane settings.

Making a picture about the political situation in a country as much in flux as the Soviet Union can be disastrous, but the post-glasnost realities here seem plausible and up to the minute. "The Russia House" doesn't sweep you off your feet; it works more insidiously than that, flying in under your radar. If it is like any of its characters, it's like Katya. It's reserved, careful to declare itself but full of potent surprises. It's one of the year's best films.

Trailer
posted by Carillon (4 comments total) 3 users marked this as a favorite
Not seen it, but I did read the book recently and I don't see Connery as Blair at all. Even Caine seems a stretch. Funnily, James Fox, who plays Ned in the film, looks more the part to my mind's eye.
posted by Alvy Ampersand at 11:26 AM on June 21, 2022

I also read the book recently and had completely forgotten about the movie. I think I should watch it, thanks!
posted by acrasis at 2:57 PM on June 21, 2022

Update: currently unavailable on Netflix, unfortunately. I wonder if a good "Le Carre" film festival would be possible. The four TV miniseries I can think of are all worth watching, but I wasn't a great fan of the "Tinker" movie and I haven't seen "The Little Drummer Girl" although I hear it is not good. The 1965 "Spy who came in from the cold" is good. "Tailor of Panama": I thought was good. "Constant Gardener": OK. I haven't seen "Our kind of Traitor", "The Looking Glass war" or "A most wanted man".
posted by acrasis at 3:47 PM on June 21, 2022

I found it free on Youtube, not sure if everyone has the same free access, but it works for me here.

Overall I thought this was pretty good, though I didn't really buy the romance. It really sells the high-stakes that are actually just for each side to chase their own tails, and not actually anything that will move things forward.
posted by Carillon at 11:56 PM on June 21, 2022 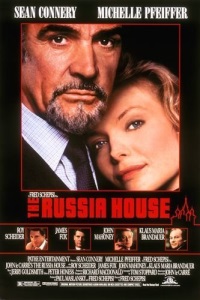