Daniel Miller (Albert Brooks) isn't having a good week. For starters, he died after he got hit by a bus. Then he discovers that in the afterlife he must defend his actions on Earth in order to ascend to a higher plane of existence. While awaiting judgment, he falls in love with Julia (Meryl Streep), whose near-perfect life on Earth seemingly makes her a shoe-in for ascension. However, Daniel's actions in his lifetime might not be enough for him to move on.

Currently streaming in the US on HBO Max. Also available for digital rental on multiple outlets.
posted by DirtyOldTown (6 comments total) 11 users marked this as a favorite
This has always been a favorite of mine. I love how just absolutely dopey he is driving in his little BMW with the music.

Rip Torn completely steals this movie.
posted by hanov3r at 7:28 AM on July 18 [9 favorites]

An absolutely perfect movie, even as it lampshades its own philosophical questions by all but telling the audience "Well, you're only using like 4% of your brain, so of course this small thing might not make sense...".
posted by Etrigan at 8:23 AM on July 18 [2 favorites]

This movie was my introduction to Albert Brooks - swear I must have watched it 900 times as a kid. Always loved it. (And yes, Rip Torn completely steals the movie)
posted by drewbage1847 at 9:51 AM on July 18 [2 favorites]

This is a funny movie but it always makes me sad because everyone is dead in it.
posted by Servo5678 at 9:58 AM on July 18

A film that speaks to me. I love the outfits, the different levels of hotels, the sushi bar yelling, the weather channel, Daniel rehearsing his salary negotiation, and so on. There's a lot of dated technology (CD's!), as well as of-its-time gags such as the large coffee table photobook of Judgement City and Shirley MacLaine's narration at the pavilion.

It's a movie that makes me feel happy and one I think about often, but for a time I wasn't sure existed. I likely caught it on HBO after its initial theater run, then never found it again. In the mid- to late-1990's it wasn't available on DVD anywhere I looked. Stumbled over it on TV (TBS?) sometime in the early 2000's, realized what it was, and recorded it on my TiVo.

What has stuck with me was its topic: fear. Bob Diamond (played by Rip Torn) said it best: “Fear is like a giant fog. It sits on your brain and blocks everything - real feelings, true happiness, real joy. They can't get through that fog. But you lift it, and buddy, you're in for the ride of your life.”

That is me. Afraid of living honestly and truthfully. Afraid of being hurt, of rejection, of trying to be happy. I've been using this movie as a goal on how I want to live, especially now that I've learned that I don't need to prove to anything to anyone but myself. I'm a little brain trying to use 4% of my brain.

Thanks for posting this; I know what I'm watching tonight. 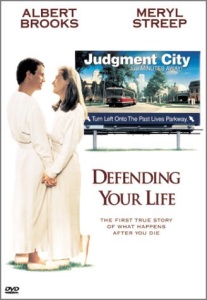