After his wife divorces him, a Polish immigrant plots to get even with her.


Polish immigrant Karol Karol (Zbigniew Zamachowski) finds himself out of a marriage, a job and a country when his French wife, Dominique (Julie Delpy), divorces him after six months due to his impotence. Forced to leave the France after losing the business they jointly owned, Karol enlists fellow Polish expatriate Mikolah (Janusz Gajos) to smuggle him back to their homeland. After successfully returning, Karol begins to build his new life, while never forgetting his old one.

Caryn James: Anyone who has seen the austere, pretentious "Blue," the first film in Krzysztof Kieslowski's "Three Colors" trilogy, will scarcely believe that the witty, deadpan "White" was made by the same man. How could the creator of "Blue," the story of a woman who grieves by moping around Paris in a chichi haircut, possibly have followed it with such a rich, light-handed marvel? Here Mr. Kieslowski takes Karol, an apparently hapless hero, and ships him from Paris home to Poland hidden in a suitcase, only to have the suitcase missing from the baggage claim on the other side. How can Karol's helpful accomplice explain to the airline that the lost luggage held 165 pounds worth of clothes?

Mr. Kieslowski is always uncompromising, leaving it to his viewers to follow him or not, sometimes in wildly wrong directions. Though "Blue" was widely praised by some critics when it opened last year, its minimalist manner and laughably serious tone played like a parody of a film by a Major European Director. "White," which opens today at the Lincoln Plaza Cinema, is laughable on purpose. When Mr. Kieslowski is at his best, as he is here and in earlier films like "The Double Life of Veronique," he simply is a major director without making a fuss about it.
. . .

"White" even looks more subtle than its predecessor, which was overwhelmed by blue shadows. Here the misty beauty of Paris and the snowy Polish countryside are effective but not blinding. Throughout, "White" is filled with exquisite scenes that don't press too hard -- when Karol saves a suicidal friend by offering him a second chance to live -- and those moments are all the richer for their understatement. "White" manages to make "Blue" look better in retrospect, too. Though Mr. Kieslowski is sometimes wrong-headed, "White" makes it clear that his ambitious trilogy is worth following.

Marjorie Baumgarten: Though Kieslowski's interests lie in the pursuit of abstract concepts, he uses all the skills of a master storyteller to achieve his goals. At heart, White is a black comedy with intriguing characters and a plot that plays its cards close to the deck.

What does White tell us about the Tricolor thematic of equality? Perhaps, that it doesn't exist. What is made more clear is inequality: in love, in wealth, in luck. Shot with great economy of images, White reverberates with connections. Central to the storytelling are the actors' faces, each so telling and reactive. And, unlike Blue, which used a sad story to explore possibilities of optimism and hope, White is dominated by the wry humor it uses to color an Everyman kind of journey. This White is guaranteed not to fade.

Derek Malcolm: Three Colours White, the second part of Krzysztof Kieslowski's trilogy based on the colours of the French flag and upon the precepts of liberty, freedom and equality, is the easiest of the three films to negotiate but by no means the least in weight. It's the kind of comedy only a hopeful pessimist could have made and, if that sounds like a contradiction in terms, you don't know Kieslowski very well.

The film specialises as much in a kind of ironic gallows humour as in laughter pure and simple, but bitterness is also avoided - which is a small miracle in itself considering the subject matter and the setting.

Trailer
posted by Carillon (2 comments total) 4 users marked this as a favorite
While with Blue I felt like I had some handle on things, this was a very different experience. There are definitely things to engage with, but because it's more straightforward, it's hard to really dig deeper into? I'm not sure, I thought the revenge plot was super underexplored or engaged with, I guess that isn't what Kieslowski is interested in, but it became very much telling rather than showing there. And is Delpy's character happy to see Karol in the hotel room? It sorta feels that way, but her character is written so flatly, it's hard to tell.
posted by Carillon at 5:40 PM on August 7

People usually say this is the weakest of the trilogy, but I still have a lot of fondness for it. I first watched all of these movies at the vary inapproriate age of 10 or so. And somehow the music really resonated with child me, and I really enjoyed the whole rags to riches story of the main character.

I also agree that some of the central elements haven't aged well and are pretty problematic. Julie Delpy's character is underdeveloped, and it's hard to know what to make of the fact that the main character has her imprisoned. I guess they're together in the end, so it's kind of okay (not really).

But anyway, if you can look past some of these problems, it's still pretty great.
posted by Alex404 at 7:49 PM on August 12 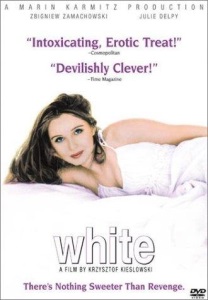