Twenty-something Arash lives in an Iranian near-ghost town called "Bad City" with his dad Hossein, who's addicted to heroin and endlessly pines the loss of his wife. By day Arash holds down a gardening job, whose wages just bought him a brand new vintage Thunderbird. At night he tries, often unsuccessfully, to hold Hossein's vicious dealer Saeed at bay. Little does Arash know that someone else is becoming quite interested in Saeed's welfare.


Ana Lily Amirpour wrote and directed this elegant revisionist vampire romance. While it's set in Iran and the spoken language is Farsi, the film was actually shot in Southern California... which makes it somehow easier to see traces of many influences, Jim Jarmusch among the most obvious. Amirpour has DJ'd in the past and the selection of tunes is spot-on.

None of the reviews I've read so far has discussed the possible meaning of the title. I believe it's a reference to the origin story of The Girl, one she is perhaps doomed to reenact on a nightly basis. That origin story is left unexplained, and the film is better for it.

I should mention that the film prominently features a chubby tabby cat, who plays an important part from the film's opening scenes right up till the end. The cat has somehow gone undiscussed in reviews as well so I'm here to rectify that omission.

The number one reason to see this film: Sheila Vand's face, across which every emotion imaginable flickers during the course of the film. She is of course given excellent support by Amirpour and DP Lyle Vincent. I was reminded at times of the way von Sternberg filmed Dietrich, except that Vand is a better actress than Dietrich was.
posted by Sheydem-tants (11 comments total) 11 users marked this as a favorite
I loved this. It was what I was hoping for from "Only Lovers Left Alive" -- while that film had it's pleasures, it was slow and meditative, while this was self-consciously electric. The cinematic vampire is so shopworn, it was thrilling to see a version of it that I feel hasn't been represented before.
posted by maxsparber at 8:19 AM on January 20, 2015 [4 favorites]

Oh mannn I have been waiting for this movie ever since I first heard about it. It's not gotten a wide release in my country (yet?) -- apparently I missed my chance at a film festival in October. The more I hear the more excited I am...
posted by Gordafarin at 12:56 PM on January 21, 2015

I loved the cinematography of it. The director makes a small cameo, she's the only blonde you see in the film. I really liked this film. Would make a great double feature with Only Lovers Left Alive.
posted by Catblack at 8:36 PM on March 25, 2015 [1 favorite]

Vice did a short making of in two parts that's worth watching after you see the film. (Because you don't want to spoil a single frame of this gem.)
posted by Catblack at 11:07 AM on March 26, 2015

This is available on (US) Netflix streaming now! Watched it this past weekend and really enjoyed it. Beautifully shot, with a great soundtrack, and just such a fun and enthralling amalgamation of its influences.

I was so into the Girl and how thoroughly ominous and terrifying she was when she was stalking the streets. There's just something really thrilling to me about the juxtaposition of her being demure and chador-clad, and also, y'know, monstrous and predatory. I just felt a vicious sort of glee whenever she flipped the script and terrified men instead of the other way around. Sheila Vand was amazing with how she went from vulnerable and lonely to truly terrifying. That scene with the little boy! Just her voice, my god.

Anyway, I loved it. I'm reminded a little of the movie Brick, which also took a bunch of disparate influences and turned them into a cohesive and clever whole, and like Brick, this movie might as well have "MY AESTHETIC" scrawled over it.
posted by yasaman at 8:28 PM on April 27, 2015 [2 favorites]

Finally watched this last night and I loved it. It absolutely wears its Jarmusch influences on its sleeve and being a massive Jarmusch fan, this hit all the right notes with me. (It also reminded me of that brief run of arty b&w vampire movies from the 90s--The Addiction, Nadia...)

Best moment in the film is the kitty's "I AM SO OUT" appearance when the girl finally murders Arash's father.
posted by Kitteh at 6:21 AM on September 21, 2015 [1 favorite]

I finally got to watch this and wow, it's really, really good! Beautifully shot black and white, a story about a nice boy and a girl who could literally kill him without breaking a sweat, and a kitty. What more could one want?

I could go on for a while about the way it looked, but "this movie might as well have 'MY AESTHETIC' scrawled over it" is pretty much where I'm at also.
posted by sparkletone at 12:10 AM on October 21, 2015

Astonishing soundtrack, too. It all sounds like it's from an alternate universe, surprising to find out that so much of it is by a band (Federale) that's not only from our world, but from my town.

Yasaman, totally Brick! I never made that connection, but I see it, I do.
posted by thesmallmachine at 3:52 PM on December 6, 2015

Just saw this. Really smart, beautiful movie. Cinematic seems like a dumb thing to say, but this feels like what movies were invented for. I kept comparing it to Let The Right One In. For some reason I'm convinced that Let The Right One In is a pro-fascist film and the ideology of this is very different.
posted by latkes at 10:58 PM on May 12, 2016

This criticism in The Dissolve did resonate for me though:

That lack of solidity, and the dreamy pacing, can make A Girl Walks Home Alone At Night feel stylish but empty, and at times narratively inert...The film sometimes seems to get lost in self-admiration and its own melancholy mood.
posted by latkes at 11:11 PM on May 12, 2016

I ended up making so many wrong guesses about what might happen next. That was fun!
I think I most enjoyed when the girl would mirror people.
The last bit as the boy silently worked through his situation, then (I don't think this was clear, but I don't care) deciding that she had actually solved every problem he had and freed him to start a new life was tense! I'll watch it again some day in the same week as let the right one in, only Lovers Left alive, and thirst.
I'm not really sure what the deal was with the ditch full of bodies. Just a normal feature of Bad City?
posted by Acari at 6:11 PM on May 16, 2021 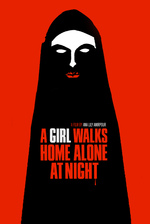