Retired Special Forces soldier John Matrix (Arnold Schwarzenegger) lives with daughter Jenny (Alyssa Milano) in isolation, but his privacy is disturbed by former commander Franklin Kirby (James Olson), who warns him that his fellow soldiers are getting killed one by one. After Kirby leaves, Jenny is kidnapped by former Latin American dictator Arius (Dan Hedaya), who wants Matrix to restore him to power. Instead, Matrix sets out to take down the rogue leader and rescue his daughter.

Currently streaming in the US on Starz. Also available for digital rental. JustWatch listing.
posted by DirtyOldTown (16 comments total) 2 users marked this as a favorite
"You're a funny guy Sully, I like you. That's why I'm going to kill you last."

"Listen, loyalty is very touching. But it is not the most important thing in your life right now! But what IS important is gravity! I have to remind you Sully, this is my weak arm!"

"Haha. You know when I was a boy and rock 'n' roll came to East Germany, the communists said it was subversive... Maybe they were right."
posted by DirtyOldTown at 6:37 AM on September 1, 2022 [4 favorites]

"Let off some steam, Bennet."

I am convinced that everyone who's into EDC blogs--I mean, really, really into them--sees this in their heads when they get dressed every morning. (YouTube started playing this automatically after the above; oh yeah, they know what I like. Might as well go straight to the money shot compilation.)
posted by Halloween Jack at 7:25 AM on September 1, 2022 [2 favorites]

That jump off of the plane's landing gear, though. It's just *phlumph* into some shrubbery and then Arnold runs off. Sure, dude, sure.
posted by SPrintF at 8:52 AM on September 1, 2022 [1 favorite]

Commando is one of my earliest favorite movies. And I appreciate it more and more as I get older. As DirtyOldTown notes, it is "the ultimate '80s Schwarzenegger movie" and I consider it to be a top contender for the title of "THE 80s Movie." It has everything: a great cast, a stupid plot, over-the-top action, continuity errors galore, wholly gratuitous nudity, and a whole lot of guns.
posted by Stuka at 9:01 AM on September 1, 2022 [3 favorites]

I am convinced that everyone who's into EDC blogs--I mean, really, really into them--sees this in their heads when they get dressed every morning.

The landing shot is hilarious, like, they couldn't afford to do a take where he got out of the boat gracefully?
posted by praemunire at 9:34 AM on September 1, 2022

INFINITE SCHWARZENEGGER
posted by spikeleemajortomdickandharryconnickjrmints at 10:13 AM on September 1, 2022 [2 favorites]

I really would have loved to have been a fly on the wall during the conversations when they decided on an action movie soundtrack made out of gated snares, steel drums, and jazz sax. I mean: it fucking works! But wow. Lotta cocaine in that room.
posted by DirtyOldTown at 10:28 AM on September 1, 2022 [2 favorites]

I always found the chain mail vest that they make Vernon Wells' character wear to be deeply hilarious, as though they had realized too late that the villain they have matching up with The Ultimate Mister Fucking Olympia looked like at best the fourth toughest dude at the corner bar and they had to butch him up somehow.

That's not a slag on Mr. Wells, just an observation about what a thankless role it is to have to be the Faces Off With Arnold Goddamn Schwarzenegger guy.
posted by DirtyOldTown at 12:08 PM on September 1, 2022

My hot take on Bennet's fashion choices: first and foremost, Vernon Wells' claim to fame is his performance in The Road Warrior. I have no doubt that when they thought to cast Vernon, they had that in mind. And second, I think that that was perhaps reinforced by the fact that Commando came out during the time when G.I. Joe: A Real American Hero was taking off. So maybe they thought they would make Bennet Dreadnokesque, which ties back into Vernon's Mad Max Australian punk biker origins.
posted by Stuka at 12:55 PM on September 1, 2022

The last time I watched this in hi-def it looked like it's actually just a gray, fabric netting.
posted by paper chromatographologist at 12:57 PM on September 1, 2022 [1 favorite]

"You're a funny guy Sully, I like you. That's why I'm going to kill you last."

I haven't seen this in forever, but I recall my initial impression was that it was trying to "family-ify" violent shoot-ey action films.
posted by porpoise at 8:29 PM on September 1, 2022

Rae Dawn Chong was in several high profile things (The Color Purple, for one), but also a ton of B movies that loomed large for some of us Gen Xers. Tales from the Darkside: The Movie? The Principal? Whoa. She was a big star in my eyes.
posted by DirtyOldTown at 7:47 AM on September 2, 2022

first and foremost, Vernon Wells' claim to fame is his performance in The Road Warrior. I have no doubt that when they thought to cast Vernon, they had that in mind. 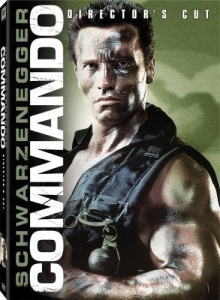