Postwar Germany, 1945. Leopold Kessler (Jean-Marc Barr), an American of German descent, works as a sleeping car conductor for the Zentropa railway line. When he meets Katharina Hartmann, the railroad owner's daughter, and they fall in love, his life intersects with the dark and violent path of a mysterious organization opposed to the United States army military occupation. (Also known as Zentropa.)

Directed by Lars von Trier from a script by von Trier and Niels Vørsel.

From the opening prologue, narrated in second person by Max von Sydow:

You will now listen to my voice. My voice will help you and guide you still deeper into Europa. Every time you hear my voice, with every word and every number, you will enter into a still deeper layer - open, relaxed and receptive. I shall now count from one to ten. On the count of ten, you will be in Europa. I say: one. And as you focus your attention entirely on my voice, you will slowly begin to relax. Two - your hands and your fingers are getting warmer and heavier. Three - the warmth is spreading through your arms, to your shoulders and your neck. Four - your feet and your legs get heavier. Five - the warmth is spreading to the whole of your body. On six, I want you to go deeper. I say: six. And the whole of your relaxed body is slowly beginning to sink. Seven - you go deeper and deeper and deeper. Eight - on every breath you take, you go deeper. Nine - you are floating. On the mental count of ten, you will be in Europa. Be there at ten. I say: ten.

As with so many films, Roger Ebert had this on the money:

"Zentropa" is a strange, haunting, labyrinthine film about a naive American in Germany just after the end of World War II. The American, named Leo, doesn't quite know what he's doing there; he has come to take a role in rebuilding the country because, he explains, it's about time Germany was shown some kindness. No matter how that sounds, he is not a Nazi sympathizer or even particularly pro-German - just confused. His uncle, who works on the railroad, gets Leo a job as a conductor on a Pullman car, and he is gradually drawn into a whirlpool of Germany's shames and secrets...

The narrative is told in a deliberately disjointed style by the film's Danish director, Lars Von Trier, whose strength is in the film's astonishing visuals. He shoots in black and white and color, he uses double-exposures, optical effects and trick photography, he places his characters inside a manylayered visual universe so that they sometimes seem like insects, caught between glass for our closer examination.

The movie is symbolic, although perhaps in a different way for every viewer. I read it as a film about the death throes of Nazism, which is represented by the train, and the moral culpability of Americans and others who turned up too late to save the victims of these trains and the camps where they delivered their doomed human cargo. The train, and the Nazi state, are dead, but like cartoon figures they continue to jerk through their motions; the message from the brain has not reached the body...

The best moments in the movie are the purely visual ones...

The film is too confusing to be successful, but too striking and visually beautiful to be ignored.

Currently streaming in the US on HBO Max and Criterion. Also available for digital rental via Alamo on Demand. JustWatch listing.
posted by DirtyOldTown (6 comments total) 2 users marked this as a favorite
For me, this is the film where von Trier's stylistic choices are most easily separated from his story/themes. Oddly, probably for that reason, it's the film of his I like best, because I can be entranced by the visual trickery and audacity without being uneasy about what this deeply problematic man is trying to say to me.
posted by DirtyOldTown at 10:15 AM on September 1, 2022

This sounds literally enchanting; von Sydow seems to be trying to hypnotize the viewer. And Udo Kier is in it. Time and chance, eh?
posted by Halloween Jack at 10:59 AM on September 1, 2022

I have never seen this film but every time it crops up I always confuse it with "Europa, Europa", which came out at almost the same time and I did see. Time to finally give it a watch!
posted by phooky at 12:43 PM on September 1, 2022

I believe that confusion was common and was why it had the alternate title of Zentropa in some markets/releases.
posted by DirtyOldTown at 12:58 PM on September 1, 2022

Great, great film, best seen on the largest screen possible with the volume up to 11. The hypnosis framing also shows up in Von Trier's earlier feature 'The Element of Crime' but here it fits the subject and narrative much more neatly. Really deeply dreamlike/nightmarish feeling throughout, and the ending is so powerful.
posted by remembrancer at 1:54 PM on September 1, 2022

I saw this when it came out and thought to myself that this director had captured the ambience I was imagining when I read "Gravity's Rainbow;" that's the gritty, stylized, black and white smokefilled world that Pynchon fills with his WWII extravaganza.
posted by chavenet at 7:41 AM on September 14, 2022 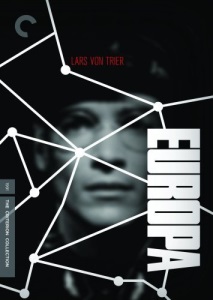