Bee and PuppyCat is an American animated streaming television series created and written by Natasha Allegri. The series revolves around Bee (voiced by Allyn Rachel), an unemployed woman in her early twenties, who encounters a mysterious creature named PuppyCat (voiced by the Vocaloid program Oliver). She adopts this apparent cat-dog hybrid, and together they go on a series of temporary jobs to pay off her monthly rent.


The series originated with a web pilot in 2013, followed by a Kickstarter supported first season which was released from 2014–16.

The Netflix version, consisting of a three-episode remake of the first season and Lazy in Space, premiered on September 6, 2022.
posted by kittensyay (17 comments total) 3 users marked this as a favorite
I've only seen the first three episodes so far and have mixed (mostly good) feelings. While I enjoyed them and found the story more coherent, I miss a lot of the original dialog bits like "You took too long, now your candy's gone!" and well, basically everything on JellyQ (?) Planet.

Interesting though how they compressed the original series (which was only an hour, to be fair) into the first three episodes and accelerated/expanded on the plot. I'm impressed but I just bristle at change, I suppose. Obviously I'm going to keep watching but need to parcel the episodes out so they last...

Curious to hear what everybody else thinks--both those who watched the originals and newbies!
posted by kittensyay at 10:32 AM on September 8, 2022

I haven't watched this yet but please confirm for my emotional well-being that "Ray-sippies. Re-sippies. Ray-spees." is still in there
posted by DoctorFedora at 8:03 PM on September 8, 2022 [3 favorites]

OK, just finished this, and the ending made me say 'what?'

Prepare yourself, DoctorFedora, I think it's gone. *weeping openly*
posted by kittensyay at 11:48 AM on September 9, 2022 [1 favorite]

Well, I have watched two episodes so far (without ever having seen the original show), and I am ... completely baffled.
posted by kyrademon at 2:33 PM on September 9, 2022 [2 favorites]

Okay, this should make sense of everything, what happened was explained in a post on the B&PC subreddit:

Episodes 4-16 of this series are effectively the real Lazy In Space. They were made as a direct follow-up to the original series, which is all on YouTube.

When Netflix got the show, after a delay of a couple of years, they wanted it to be self-contained on their service. So they made three new episodes that summarize the original. Since there's less time, some things that were foreshadowed before are made more explicit, and a few more details are different/changed. But to get the most canonical sense of the story, you should watch the above link on Youtube, then eps 4-16 of Lazy in Space. 1-3 aren't bad and are fun and explain a little more, but are not necessary to the experience, and may actually confuse things a bit. (And Cardamom's voice sounds different because of his VO getting older.)
posted by JHarris at 1:43 AM on September 10, 2022 [2 favorites]

They also corrected at least one thing: in the pilot, Bee lived in a room in an apartment building. After that, she lives in a house. That seems to be a retcon, since she lives in a house in the remade episodes.
posted by JHarris at 1:46 AM on September 10, 2022

Also, made for my own use, but you might find it helpful, is this guide to the Wizard family:

Merlin:
Has black hair (the darkest in the family) and wears glasses
The doctor
Didn't actually graduate from medical school
The oldest
Named after the famous Merlin from Arthurian legend
Gets along best with Toast, father to her baby

Wesley:
Dark skin, short hair, slight five o'clock shadow
The one who likes fish
Keeps fish that he's nursing to health in the bathroom
The second-oldest
Named after Wesley Durgan, from the book A Wizard Named Wesley by Kevin and Rachel Kirsch
The cool one, Puppycat is quite envious

Crispin:
Dark hair with light skin
Fascinated by clowns
Ran away at the age of 10 to join the circus
Has a garage where he makes clown-themed vehicles
The third-oldest
Named after Crispinophur from King's Quest
Made Bee's motorbike

Howell:
Green shiny hair done in a pony tail
Runs the Cat Cafe
Excitable
The middle child
May be named after stage magician Christopher Howell? I'm unsure what the connection is with this one
Bee doesn't like him because he fired her

Tim:
A little heavy-set and short, with light green hair (slightly lighter than Howell's)
The quiet one
Does prep work at the Cat Cafe
The third-youngest
Possibly named after Tim the Enchanter from Monty Python and the Holy Grail
Hasn't had a feature episode yet

Cass, a.k.a. Castaspella:
The girl, has short, light hair (the lightest after Deckard)
The sanest one
Gave up on being a wrestler
Works as a programmer
The second-youngest
Named for a She-Ra character
Is friends with Bee, but thinks Bee is weird

Deckard:
Heterochromic eyes, and has somewhat dark skin and white hair shaved into a strip (the lighest in the family)
Stutters slightly
He's pretty quiet
The cook, and the linchpin of the cat cafe; business collapsed when he went away
In most episodes of Lazy in Space he's away at Cooking Prince academy, failing to learn how to bake
The youngest
May be named for Deckard Kain, a character from Diablo
Bee's best friend
posted by JHarris at 10:57 PM on September 10, 2022 [1 favorite]

Gah, the pacing of the 3 recap episodes is so jarringly different. I'm glad episode 4 (plus?) returned to the same vibe as the first season.
posted by Popular Ethics at 9:47 PM on September 12, 2022

Some episodes have a lot of details that's easy to miss, and might be able to handle more discussion, so I've started writing them up individually, starting with #4 (the first season's episodes have already been done, I believe).
posted by JHarris at 2:48 AM on September 13, 2022

Oh I bet Howell was named for Howl (aka Howell Jenkins) of Howl's Moving Castle.
posted by dipping_sauce at 5:39 PM on September 25, 2022 [1 favorite]

I started watching this on Netflix and was just very confused. I think I may try the youtube series and see if that makes more sense. (Although I get the feeling that 'making sense' is not really the primary appeal of this series?)
posted by Karmakaze at 9:04 AM on October 17, 2022

Many of the weird things do have explanations. The YouTube series introduces Bee as a quirky and aimless young woman first, and only makes it clear at the end that she's really some kind of robot.
posted by JHarris at 11:30 PM on October 17, 2022 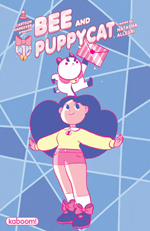