A man raised in the jungle by apes falls in love with a wealthy American heiress.


George (Brendan Fraser) has raised himself since since he was a baby and a plane crash stranded him in an African jungle. Now an adult, George has his first human contact in years when he rescues explorer Ursula Stanhope (Leslie Mann) from a lion. George and Ursula connect, and she leaves her fiancé, Lyle (Thomas Haden Church), and takes George back to San Francisco. But when George learns that his gorilla buddy has been captured, he and Ursula return on a rescue mission.

Danielle Solzman: The film is completely absurd but the comedy is so ridiculous here that it really doesn’t matter. You have a moment where poachers Max (Greg Cruttwell) and Thor (Abraham Benrubi) are getting into a fight with narrator Keith Scott. I mean, if you’re going for a spoof, you have to take it all the way! Hell, they spoof The Lion King‘s Pride Rock when George and Ursula present their new son, George Jr., the the jungle animals. Ape still ends up with a Las Vegas stage show but on his own accords. After all, he does it his way much like Frank Sinatra.

Visually speaking, there’s a solid mix here of real animals, animatronics/puppets, and CGI. I mean, can you imagine Brendan Fraser getting into it with an actual lion? He’s holding an animatronic while his stunt double wrestles one of the three lions used in the film. None of the gorillas are here but that’s not much of a surprise. And yet, none of this takes one out of the film. After all, we’re here for the comedy and that’s exactly what we get.

George of the Jungle is still an all-around fun time with plenty of laughs after a quarter of a century.

Lisa Schwarzbaum: The animated George, a parody of Tarzan, came out of the beatnik-hep animation workshop of Jay Ward Productions (the home of Rocky and Bullwinkle) and featured George regularly crashing into immovable objects, chatting with his erudite simian mentor (named, reasonably, Ape), and pausing for interruptions by a wiseacre narrator. The Disney George, conceived as yet another postmodern live-action interpretation of a nostalgia-inducing animated TV cartoon, doesn’t have quite the avant-garde edge of the old stuff (slamming into trees isn’t nearly as funny when there’s a real face squashed against the bark, no matter how ”safely” stylized). But there are enough winking touches of Ward-style lunacy in this brightly colored production from director Sam Weisman (D2: The Mighty Ducks) and screenwriters Dana Olsen (The Burbs) and Audrey Wells (The Truth About Cats & Dogs) to give this George the kind of sophisticated split-level appeal of the original. Like a monkey insistently pelting passersby with banana peels, the movie hits you on the head until you laugh.

Richard Propes: Unfortunately, even the cast's obvious awareness of the lackings of this film can't salvage it from its unintentional campiness. The actors seem to know they are in a bad film, but gosh darnit...they keep trying to make it a good film. Their effort only seems to make the failings funnier.

So many wonderful performers are completely lost here including the marvelous character actress Holland Taylor, John Cleese, and Richard Roundtree. The script is the worst kind of script for a kid's movie because it actually talks down to kids. I couldn't help but picture the kids in the row next to me looking at their mother and saying "This is stupid, mommy." Yes, "George of the Jungle" is that bad.

The film passes only on the strength of Fraser's effort. Fraser is so earnest in his desire to make a family oriented, innocent film that watching him speak ape just has to make you chuckle. It's stupid, pointless and painful...but, still, somehow funny.

Trailer
posted by Carillon (3 comments total)
Don't know what Propes was watching. I thought this was fun. I was going with a small cousin and was pleasantly surprised to actually have a good time. But I was already a fan of Jay Ward cartoons. I heard somewhere that Joel Hodgson punched up the script, but I don't have proof of that, although it would explain why I liked it so much.

Brendan Fraser was just a delight, but he generally is.
posted by Countess Elena at 6:54 AM on September 12, 2022 [2 favorites]

Also, Brendan Fraser was very pleasant to look at in this movie. I've always found him adorable, and am glad to see he might be coming back to entertainment again.

I'm old enough to have watched and enjoyed the cartoons when they came out. 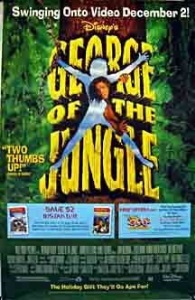