Hiccup (Jay Baruchel) is a Norse teenager from the island of Berk, where fighting dragons is a way of life. His progressive views and weird sense of humor make him a misfit, despite the fact that his father (Gerard Butler) is chief of the clan. Tossed into dragon-fighting school, he endeavors to prove himself as a true Viking, but when he befriends an injured dragon he names Toothless, he has the chance to plot a new course for his people's future.

Currently streaming in the US on Amazon Prime Video and available for digital rental on multiple outlets. JustWatch listing.
posted by DirtyOldTown (6 comments total) 3 users marked this as a favorite
This was a better movie than I expected it to be when I saw it. It's rather touching, really. Silly names aside, the dragon/human relationship is one big AWWWWW. And Toothless having retractable teeth? Dang. Reminds me a wee bit of Temeraire with having a rare dragon, but still very cute.
posted by jenfullmoon at 1:34 PM on September 23 [8 favorites]

Shoutout to the excellent soundtrack by John Powell, as well.

There are a number of similarities between this movie and Avatar, which came out just a few months earlier. And my hot take is that despite how those two films are usually labeled, if you compare them thematically, it makes more sense to categorize Avatar as "fantasy" and HtTYD as "science fiction".
posted by teraflop at 3:10 PM on September 23 [1 favorite]

Definitely wins the award for most cat-like reptile.
posted by amtho at 7:46 PM on September 23 [5 favorites]

This movie is eminently rewatchable, I think largely due to the voice acting.

The sequel series Dragons: Race to the Edge (currently on US Netflix) is definitely worth checking out, too.
posted by soundguy99 at 7:37 AM on September 24 [1 favorite]

I love this movie, and the whole series. The characters have so much personality and depth.

Definitely wins the award for most cat-like reptile.

Stuart Sumida is a Paleontology professor (among many other things) at CSUSB who works with a lot of movie studios, including DreamWorks here, to get realistic animal movement (including Toothless, who was in fact modeled on a cat) - I had the chance to hear him talk about this a few years ago - super interesting guy!
posted by chbrooks at 9:19 PM on September 24 [1 favorite]

Killing dragons is wrong and stupid, apart from this one!
posted by rhamphorhynchus at 5:33 AM on September 26 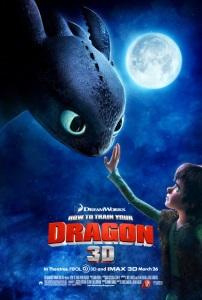