Merida (Kelly Macdonald), the impetuous but courageous daughter of Scottish King Fergus (Billy Connolly) and Queen Elinor (Emma Thompson), is a skilled archer who wants to carve out her own path in life. Her defiance of an age-old tradition angers the Highland lords and leads to chaos in the kingdom. Merida seeks help from an eccentric witch (Julie Walters), who grants her an ill-fated wish. Now, Merida must discover the true meaning of courage and undo a beastly curse before it's too late.

Like all of Pixar's animated features, this one is streaming on Disney Plus. Also available for digital rental on multiple outlets.
posted by DirtyOldTown (9 comments total) 2 users marked this as a favorite
I'm still working on getting the IMDB 250 up here. Seemed time for something lighter.
posted by DirtyOldTown at 1:49 PM on September 27, 2022 [1 favorite]

There are a couple of YouTube videos that have professional archers rating archery scenes in movies and TV, and "Brave" always gets plaudits for its accuracy.
posted by hanov3r at 7:13 PM on September 27, 2022 [4 favorites]

The most underrated Pixar film - - perhaps the closest they have gotten to Miyazaki.
posted by fairmettle at 11:37 PM on September 27, 2022 [4 favorites]

When my daughter was younger, we took a trip to the Disney store and they had a new line of princess dolls. All of them had these serene smiles except for Merida, who had a smirk. That girl was ready to start some shit, which is why she's my favorite Disney princess.

And every scene King Fergus is in is gold. God bless Billy Connolly.
posted by AlonzoMosleyFBI at 3:23 AM on September 28, 2022 [4 favorites]

I'm grateful for this movie because of how very happy it made many women I know who have masses of curly hair, are archers, are not petite, or combine some or all of the above. The movie itself I remember enjoying while I watched it in '12 or '13, but today I remember almost nothing that occurred after the opening bits of character establishment/scene setting.
posted by cupcakeninja at 5:02 AM on September 28, 2022

In re-watching the clip of Merida target shooting, I think I've noticed a ten-year-old mistake and a separate continuity error.

In the slo-mo clip, the arrow is seen sliding the bow with the cock feather on the left; when the POV shifts to the front of the bow, the cock feather is on the opposite side.
posted by hanov3r at 8:25 AM on September 28, 2022

I love so much about this movie, but the scene in which Queen Elinor breaks up a brawl among all four clans simply by walking regally thru the room is one of my favorites.
posted by Gelatin at 10:45 AM on September 28, 2022 [3 favorites]

Rewatchability is a crucial but underrated feature in kids' programming. If a kid enjoyed something once there's a decent chance you'll be seeing it again. Brave is ludicrously rewatchable; I liked it more after the fifth viewing than the first! And the visuals still hold up well -- that hair! But above all, I've always liked that the movie centers a fraught-but-loving mother-daughter relationship. They're so fair to both characters. I love that a kids movie was able to show such a complex relationship.
posted by grandiloquiet at 8:00 AM on September 29, 2022 [3 favorites]

The most underrated Pixar film

I am increasingly of the opinion that Onward occupies that slot.
posted by We had a deal, Kyle at 10:08 AM on September 29, 2022 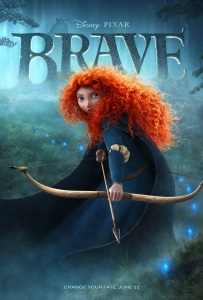