As U.S. troops storm the beaches of Normandy, three brothers lie dead on the battlefield, with a fourth trapped behind enemy lines. Ranger captain John Miller (Tom Hanks) and seven men are tasked with penetrating German-held territory and bringing the boy home.

Currently streaming in the US on Paramount Plus. Also available for digital rental on multiple outlets. JustWatch listing.
posted by DirtyOldTown (12 comments total)
So, I think Schindler’s List was a turning point for Spielberg, without which, Saving Private Ryan never would have happened. Before Schindler, Spielberg was already a master of audience manipulation. He could make you laugh, make you cry, make you gaze in wonderment. What he never did was make you uncomfortable. After Schindler, he became more transgressive, and more willing, even eager, to make his audience squirm. It was like his unflinching take on the holocaust freed him from the bourgeois trappings of polite cinema. You can already see the shift in The Lost World. The (literal) suspense sequence where the camper is hanging off the cliff and Julianne Moore’s character is lying on a window that cracks a little more every time she moves is masterful, and I think would have never happened before Schindler.

Saving Private Ryan is full of moments where Spielberg ratchets up the tension to unbearable levels. The peak of it is probably the sequence where Upham is paralyzed with fear at the bottom of a staircase while Mellish is fighting for his life and being slowly and brutally stabbed on the floor above. It is so uncomfortable and unpleasant, and I am so here for that shit.

I think it’s also notable that Spielberg has worked exclusively with cinematographer Janusz Kaminski since Schindler. It’s a cinematic collaboration on the level of Scorsese and Thelma Schoonmaker. Kaminski has pushed Spielberg’s visual sensibility with a lot more experimentation than he had previously attempted. His films used to have a classic cinema look. Now they are more varied, like this film, with its aggressive bleach bypass treatment, which had the unfortunate side-effect of inspiring Zack Snyder’s whole thing (yuck).

I've never seen anybody more shattered leaving a movie than when I saw this in the theater and a guy clearly old enough to be a WWII vet was leaving right in front of me.
posted by CheesesOfBrazil at 8:09 AM on September 30, 2022 [4 favorites]

Definitely a great war movie, right up until (imo, of course) the, typically Spielbergian, deus-ex-Mustang ending in the duel between John and the Panzer. (See also: The deus-ex-T-rex ending in Jurassic Park.) That doesn’t ruin anything about the film for me, of course. It’s just a reminder who made the movie.
posted by Thorzdad at 8:27 AM on September 30, 2022

The Mellish scene is part of the reason I have so much trouble ever re-watching this movie. It flat out destroys the war movie mythos and is one of the ugliest (because of its realism) things to be committed to film.

I don't think you can over emphasize the impact that the opening D-Day sequence has had on war stories in the slightest.
posted by drewbage1847 at 9:09 AM on September 30, 2022 [3 favorites]

I saw this while stationed in Germany (this seems to be a running theme on FanFare these days). You can imagine how a bunch of young soldiers, very few old enough to remember Vietnam at all and very few that had even been in Desert Storm, reacted to it.

That said, the framing sequence is the worst part of this movie. It should have opened on Normandy and ended in Ramelle (perhaps without "Earn this", too, but that's a vastly secondary sin).
posted by Etrigan at 11:24 AM on September 30, 2022 [2 favorites]

I saw this in the evening, at the theater, after spending the day at the National Holocaust Museum.

Part of what makes the beginning sequence so great is how little narrative framing it has. It speaks for itself. It doesn't even end cleanly, it just kind of moves onto the next thing in a weird awkward thing when Hanks is given his new orders. That's always interesting to me, like when you're doing a project at work and it's ending and the next project is starting, and everyone's head is in different places...

Versus Dunkirk which is sliced into pieces by its narrative structure.

So much shcmaltz though. It's funny that the most vital bit from this movie is the Matt Damon aging meme.
posted by fleacircus at 9:56 PM on September 30, 2022 [2 favorites]

Part of what makes the beginning sequence so great is how little narrative framing it has.

I like that he recreated the "Into the Jaws of Death" photograph. I can't imagine being that photographer, and the movie gives a unique fly on the wall experience of that, which I appreciate.
posted by rhizome at 2:01 AM on October 1, 2022

Upham is paralyzed with fear at the bottom of a staircase

I really hate his cowardice in that scene. Then I think, maybe I wouldn't be any braver.

I liked this interpretation of what the German soldier says in the knife fight:

Jürgen’s use of du is in the sense of one ordinary enlisted man speaking in a comradely way to another one, not insulting, but respectful. (In a gladiator-to-gladiator way, perhaps—I’ve got to kill you, but no hard feelings; or “it’s nothing personal, just business,” to quote from another great movie!) In modern American colloquial speech, “Give up, bro, no chance…let’s just get it over with…it’ll be easier for you, pal, a whole lot easier…you’ll see, it’ll be over just like that” would capture the words and intention more than a stiff literal translation of the German sentences.

The scene where they attack the machine gun nest always makes me mad because the tactics are so stupid. They have an excellent sniper. He should kill or intimidate the machine gun team from a distance while the other guys sneak up along the tree line and throw grenades. Charging across the field is dumb.

Also, they should've just ignored it in the first place since it wasn't their mission.
posted by kirkaracha at 11:56 AM on October 1, 2022 [1 favorite]

That said, the framing sequence is the worst part of this movie. It should have opened on Normandy and ended in Ramelle (perhaps without "Earn this", too, but that's a vastly secondary sin).

I'm not a fan of the very 90's CGI morphing, I wish he'd just used a cut, but I love the epilogue in the cemetery. It's obvious that Ryan has never talked to his wife or his family about what happened and has been carrying this trauma alone for fifty years. When he asks her "have I been a good man?", she has no idea what he's talking about.

It made me think of my uncle Alvin lost half his right hand on the beach on D-Day and never ever talked about it, even to my dad. I just watched a badly uploaded clip on YouTube of that scene and started crying again.
posted by octothorpe at 6:11 AM on October 2, 2022

Some of the suspense of seeing it the first time was spoiled for me by the old man in the cemetery wearing a 101st Airborne pin on his shirt. Private Ryan being the only character of import in the movie from that unit.
posted by Abehammerb Lincoln at 4:01 PM on October 2, 2022 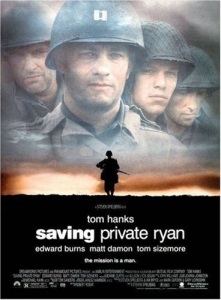