In April of 1945, Germany stands at the brink of defeat with the Russian Army closing in from the east and the Allied Expeditionary Force attacking from the west. In Berlin, capital of the Third Reich, Adolf Hitler proclaims that Germany will still achieve victory and orders his generals and advisers to fight to the last man. When the end finally does come, and Hitler lies dead by his own hand, what is left of his military must find a way to end the killing that is the Battle of Berlin, and lay down their arms in surrender.

Currently streaming in the US on Hoopla and Kanopy. Also available for digital rental on multiple outlets. JustWatch listing.
posted by DirtyOldTown (16 comments total) 2 users marked this as a favorite
I mean, if we're gonna burn through the WWII movies on the IMDb top 250, may as well.
posted by DirtyOldTown at 5:48 AM on October 1, 2022

It’s a well-made film, but maybe a bit too dramatic for the sorry end of a gang of conmen who dragged an entire continent into their dumb scheme. I’m not sure it’s possible to make a film about the Nazis that would actually show how garbage they were; if it was, we might have fewer Nazis.
posted by GenjiandProust at 5:59 AM on October 1, 2022 [8 favorites]

There’ve been at least 3 movies about Hitler in the bunker, including this one. Alec Guinness played him in Hitler: The Last Ten Days. Anthony Hopkins did it in The Bunker. This is probably the best and most accurate version. Which I realize now is ridiculous for me to say, because I wasn’t there. But my point is, it feels real. And it’s so unpleasant in its accuracy. I really don’t like this Adolf fellow, nor any of his friends. But it’s clear that for an actor of a certain age, Hitler presents an amazing opportunity to flex the acting muscles.

I was thinking the same thing about Marilyn Monroe, in the wake of Blonde. (Yes, I’m comparing Hitler and Marilyn Monroe, but I’m not the first to do it. Tony Curtis went there first! Don’t @ me!). I think Marilyn presents a unique and exciting challenge for an actress because her affect and her look are so specific, but underneath all that there’s an incredible amount of trauma and subtext that’s like a goldmine. It’s like Hamlet. Or Hitler, who similarly has a specific affect and tons of tics and mannerisms. This is actor catnip.

So my point, I guess, is we’ll always have actors who want to tackle playing Hitler but Bruno Ganz really raised the bar with this performance.
posted by wabbittwax at 6:19 AM on October 1, 2022 [8 favorites]

I've not seen this film - at least not with accurate subtitles - but Netflix once assured me that I would like it because I enjoyed Arrested Development. So it's kind of like that, I guess?
posted by Naberius at 6:26 AM on October 1, 2022 [13 favorites]

You could very easily replace the subtitles for Downfall with subtitles for Arrested Development and it would be nearly seamless.

“I’ve made a huge mistake”

“I may have committed some light treason.”

“And that’s why you always leave a note.”

Downfall is a favorite. Everything is superb. It's another movie where the acting is amazing. But what really jumps out at me is how dangerous it feels. Hitler is going down, no doubt. But who is going with him? Who is he taking with him? The last days were a confused and desperate mess of mass murder, mass suicide, and murder-suicide. And it's even sadder since everyone in the bunker had their chance to get out. Of course, the only sane man in the room is Speer, who actually comes and goes TWICE!
posted by Stuka at 7:35 AM on October 1, 2022 [2 favorites]

I’m not sure it’s possible to make a film about the Nazis that would actually show how garbage they were; if it was, we might have fewer Nazis.

I think that that's at the heart of the Downfall parody meme; it's not just that Hitler rants, but Hitler breaks. At the end, he's just pathetic. Unfortunately, that was by no means the end of fascism; it just rebrands and starts over elsewhere.
posted by Halloween Jack at 9:08 AM on October 1, 2022 [4 favorites]

That Downfall Scene Explained - What Is Hitler Freaking Out About? Interesting breakdown of the situation and who's who.
posted by kirkaracha at 11:26 AM on October 1, 2022 [6 favorites]

I remember seeing that movie when it first came out in theatres. Everyone filed out in total silence. My friend and I were in among a group of total strangers, and finally one of them said "Oh my God, that actor just made me feel sorry for Hitler." We all ended up standing on the street talking for a good half hour about what an amazing movie it was.

Of course, the world was a different place in 2004, and it's interesting to wonder if our reaction would be the same if we were seeing it for the first time now.
posted by rpfields at 12:28 PM on October 1, 2022

It’s a well-made film, but maybe a bit too dramatic for the sorry end of a gang of conmen who dragged an entire continent into their dumb scheme.

For me it's a weird movie to watch because it's about the group of people suffering and living in well-earned dread of their suffering to come but mostly my reaction is YEAH FUCK YOU HERE COMES ZHUKHOV
posted by GCU Sweet and Full of Grace at 2:21 PM on October 1, 2022 [12 favorites]

Quote from the director, re: the Hitler rant parody memes:

“Someone sends me the links every time there’s a new one,” says the director, on the phone from Vienna. “I think I’ve seen about 145 of them! Of course, I have to put the sound down when I watch. Many times the lines are so funny, I laugh out loud, and I’m laughing about the scene that I staged myself! You couldn’t get a better compliment as a director.” Some of Hirschbiegel’s favorites are the one where Hitler hears of Michael Jackson’s death, and one in which the Fuhrer can’t get Billy Elliot tickets.

As for the idea of such a serious scene being used for laughs, Hirschbiegel thinks it actually fits with the theme of the movie. “The point of the film was to kick these terrible people off the throne that made them demons, making them real and their actions into reality,” he says. “I think it’s only fair if now it’s taken as part of our history, and used for whatever purposes people like.”

Interesting breakdown of the situation and who's who.

When this movie ended there was a devastated silence in the bioscoop. Everybody got out without talking.
posted by jouke at 10:20 AM on October 2, 2022

Eh, I felt it was just making Nazis look fancy. Maybe if it had been more “this fucker murdered millions

I feel like the movie is not being unreasonable in expecting the audience to know the Nazis were not distinguished by their efforts on equality, diversity and inclusion. I've seen a lot of criticism elsewhere saying this film did too much to make Hitler and the other high ranking Nazis more human, but I think any part of remembering what they were, with a view to preventing future holocausts has to be rooted in them being human and monsters not just being monsters. Future Hitlers will all be human.
posted by biffa at 12:49 PM on October 2, 2022 [12 favorites]

Eh, I felt it was just making Nazis look fancy

I don't agree.
The movie is about the final comeuppance of evil men and women. The moment when all the delusions of grandeur and their imagined superiority over other people collapses. It's the day of reckoning: they'll be destroyed ignominously. And everybody and everything around them.

With Trump we can see how there's a whole force field around him where facts don't matter. It's all about us vs them. And about might is right. If you're not for us your against us.
As long as they're winning they can maintain this.

World war II was on a different continent for US citizens. So the last 70 yrs it's been easy to feel that 'nazis' are other worldly wild eyed lunatics frothing at the mouth.
But if utter evil is done it's by people who live in your own city. Done by your neighbours to your neighbours.
posted by jouke at 7:58 AM on October 3, 2022 [7 favorites] 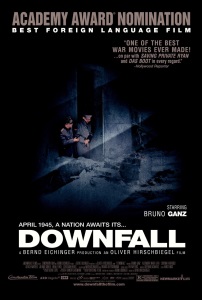