A young Bruce Wayne (Christian Bale) travels to the Far East, where he's trained in the martial arts by Henri Ducard (Liam Neeson), a member of the mysterious League of Shadows. When Ducard reveals the League's true purpose -- the complete destruction of Gotham City -- Wayne returns to Gotham intent on cleaning up the city without resorting to murder. With the help of Alfred (Michael Caine), his loyal butler, and Lucius Fox (Morgan Freeman), a tech expert at Wayne Enterprises, Batman is born.

Currently streaming in the US on HBO Max and Hulu. Also available for digital rental on multiple outlets. JustWatch listing.
posted by DirtyOldTown (14 comments total)
This movie has a lot of things to like about it, but on the whole, I did not care for it. I'm exhausted by even abbreviated retellings of the Batman origin at this point. Even adding the "mystical, Far East" component didn't do much for me. I also found the fight scenes so dark and poorly edited and staged as to be be unwatchable. I generally could not tell what was going on.

I did think The Dark Knight was pretty great though, so maybe I need to watch this again at some point.
posted by DirtyOldTown at 7:41 AM on October 4 [1 favorite]

Of all the non-animated Batmans of recent years, I actually think this is the one I enjoyed the most, even though I hate looking at Cillian Murphy's face. The supporting cast is very strong.
posted by praemunire at 8:11 AM on October 4

Batman Begins is a mess, IMO.
1) First and foremost, Nolan doesn't understand his main character.
2) Nolan commits a cardinal sin by telling and not showing. Bruce/Batman is supposed to be dark and brooding and all that. But he really comes off as just a rather noble version of the character who is having himself quite an adventure taking down the mob. But then Rachel is there to tell us Bruce is the mask and he's really Batman now. Yeah, right.
3) I liked Linus Roache as Tom Wayne. But besides that, another origin story was unnecessary. And then Nolan compounded the error with how stupid it was. Bruce wastes his time slumming it as a thief to... learn what it's like to be a thief? And only after he's recruited by Ra's is he trained to be... a ninja? Not only unnecessary, not only stupid, but it points back to Nolan not understanding his main character.
4) Chicago as Gotham City doesn't work for me. Either come up with something completely original a la Batman (1989) or film in New York City. Chicago doesn't look the part at all, even with CGI skylines and the Narrows. In my mind, Gotham City is the NYC inhabited by the likes of Popeye Doyle and Paul Kersey.
posted by Stuka at 9:12 AM on October 4 [1 favorite]

I grew up on the '60s TV show, so all this grimdark bullshit Batman has become less and less fun over the years.
posted by kirkaracha at 10:06 AM on October 4

My default Batman is Batman TAS from the early 90's, and Nolan's stuff is overly grimdark for me.
posted by Pope Guilty at 10:11 AM on October 4 [2 favorites]

Batman TAS is good, yes. It's really hard to beat Kevin Conroy as Bruce/Batman. But I contend that Will Arnett (LEGO Movie, LEGO Batman) is pretty darn close.
posted by SPrintF at 11:42 AM on October 4 [1 favorite]

This movie is kind of a mess, and I do agree with most of Stuka's points. Still, there are a few pretty good moments. "SWEAR TO ME!" is a both hilarious and awesome moment. Tom Wilkinson as Carmine Falcone is having tons of fun with his ridiculous accent (Cillian Murphy is also fun). And there's one moment, when Commissioner Loeb is on the radio after the Narrows have been cut off, and just as he says "There's no one left to send!" you see the Batmobile launching over the river into the fight; I admit, every time I see that, I'm like "Fuck yeah Batman! Whoo hoo!"
posted by Saxon Kane at 2:08 PM on October 4 [3 favorites]

Chicago as Gotham City doesn't work for me.

It does for me when I'm riding on Lower Wacker Drive at night and imagining that I'm doing it in the Tumbler.
posted by Halloween Jack at 3:13 PM on October 4 [5 favorites]

I'd be curious to know more from those who think Nolan doesn't understand his main character. I thought this was a terrific updating of the Denny O'Neil comics-era Batman, and I thought that Nolan's choice to make Batman a college-dropout-turned thief a smart and surprisingly empathetic one.

I think of Nolan as an operatic director (which I think benefits the material) but there's an uncharacteristically subtle scene where Bruce Wayne says something along the lines of, "The first time I stole because I was hungry, I lost a lot of illusions about what it means to be a criminal." I thought that was a great choice. It's one thing for billionaire Bruce Wayne to claim that his lifestyle means nothing to him; it's another to dramatize it by having him walk away from it completely in the first act.

It worked for me but I'm genuinely curious to know what didn't work for others.
posted by reclusive_thousandaire at 3:49 PM on October 4 [5 favorites]

I'm exhausted by even abbreviated retellings of the Batman origin at this point.

I thought that, too. But the recent retelling in the latest season of Harley Quinn made me laugh my ass off so hard I had to rethink my analysis.
posted by Quonab at 4:44 PM on October 4 [7 favorites]

I think this is my favourite of the Nolan Batman films - it at least takes a crack at justifying why someone might choose to dress up as a bat and fight criminals one by one, especially if they also had access to a billionaire's resources. I found The Dark Knight a little confused - is The Joker anarchic or a mastermind? - and Rises just kind of boring.
posted by Merus at 10:58 PM on October 4 [1 favorite]

Batman TAS is good, yes. It's really hard to beat Kevin Conroy as Bruce/Batman. But I contend that Will Arnett (LEGO Movie, LEGO Batman) is pretty darn close.

Dietrich Bader's been doing good work there, too.
posted by mikelieman at 3:28 AM on October 5 [1 favorite]

I think this is a perfectly solid Batman film, and I think it has a reasonable grasp of a Bruce Wayne who is trying to be Batman. Note that he actually has to learn to be both Batman and Bruce Wayne by the end of this film, realising one is not quite enough. I enjoy him taking down the mob, and the focus on how he isn't just intending to beat them up, but bring them to justice, was pretty good. Sure some of the plotting is confusing or just bad, and his moral line in the sand is odd to say the least (no killing, unless its a monastery full of people) but I think this works.

I actually think the fight staging works to make Batman this figure of mystery who swoops in and takes people down before they realise what happens; it's true that this comes from an era of film making when directors got obsessed with making action films where you can't tell what's going on, but I think in generally worked here.
posted by Cannon Fodder at 8:25 AM on October 5

Dietrich Bader's been doing good work there, too

Don't sleep on the "Batman: The Brave and the Bold" animated series.
posted by hanov3r at 9:09 AM on October 5 [2 favorites] 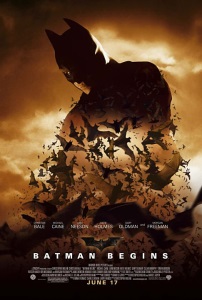