Flik (Dave Foley) is an inventive ant who is always messing things up for his colony. His latest mishap was destroying the food stores that were supposed to be used to pay off grasshopper Hopper (Kevin Spacey). Now the strong-arming insect is demanding that the ants gather double the food -- or face annihilation. To avert disaster, Flik goes on a journey to recruit fighters to defend the colony. When he meets a band of high-flying circus insects, he thinks he's found his salvation.

Streaming in the US on Disney Plus, naturally. Also available for digital rental on multiple outlets. JustWatch listing.
posted by DirtyOldTown (10 comments total)
Ladies and gentlemen, I present to you the one and only Kevin Spacey performance that remains watchable to this day (because it’s just his voice, not his smug face).
posted by wabbittwax at 9:27 AM on October 4, 2022 [2 favorites]

Ladies and gentlemen, I present to you the one and only Kevin Spacey performance that remains watchable to this day (because it’s just his voice, not his smug face).

And his character's fate (Spoiler!) is being torn apart and consumed.
posted by AlonzoMosleyFBI at 11:16 AM on October 4, 2022

I'm sorry to print a Vulture ranked list, but I largely agree with this one. "Bug's Life" was the first Pixar movie I didn't quite like.
posted by acrasis at 5:22 PM on October 4, 2022

Wow, 92% fresh? This is also the first Pixar movie that I couldn't process. I don't know if you can call it the uncanny valley, but the ultra-detailed blades of grass that you could barely tell from HD film surrounding pink and blue bipedal ants just left me twitchy. I don't require my anthropomorphic animals (or insects) to be perfectly accurate to nature but even the non-ants looked vaguely like real insects -- who thought making the ants pastel and humanoid was a good idea?
posted by Karmakaze at 6:55 PM on October 4, 2022 [1 favorite]

Moon (2009) is also a performance that only features Spacey's voice.

A ragtag group of past-their-prime entertainers get recruited to fight a real-life bad guy based on the misunderstanding that they actually know what they are doing. It goes surprisingly well for like two minutes until everyone figures out the truth and loses both faith and hope. But maybe the plucky group can summon the courage after all and rouse the team to fight back?

It's Three Amigos! It's Galaxy Quest! It's...A Bug's Life. Galaxy Quest pulled it off on the strength of the performances from that outstanding cast but I never could get into it with A Bug's Life. Especially after Pixar had established itself as such a unique storyteller.
posted by AgentRocket at 9:06 AM on October 5, 2022

Huh. This is probably my favorite Pixar movie so I guess I'm in the minority. What draws me to this one is that it reminds me of a mid century over the top Broadway musical which I have a huge fondness for. I know it's not a musical, but the themes are similar. I went to this with a college friend and she also really liked it and then told me I remind her a lot of Flik - so maybe that's another reason I like it?

The cast (except for Spacey and Leary who I could have done without) are fantastic and very well chosen for their parts. The characters are strangely believable and relatable considering it's a strange story told by insects.
posted by Clinging to the Wreckage at 9:50 AM on October 5, 2022

I guess I'm on Team Meh, as far as this one goes. And, I can't quite put my finger on why. It just doesn't involve me, I guess. I found Flik more annoying than sympathetic.

I recall enjoying this well enough when it came out but a quarter century on, if you asked me questions about, “Was this in A Bug’s Life or in Antz?” I could not answer any of them with any certainty whatsoever.
posted by ricochet biscuit at 4:51 AM on October 6, 2022

I have a soft spot in my heart for "Seven Samurai" retellings. "A Bug's Life" is my second favorite (behind Roger Corman's "Battle Beyond the Stars").
posted by hanov3r at 1:03 PM on October 6, 2022 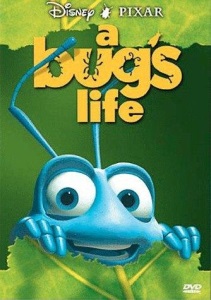