Jamie Graham (a young Christian Bale), a privileged English boy, is living in Shanghai when the Japanese invade and force all foreigners into prison camps. Jamie is captured with an American sailor, who looks out for him while they are in the camp together. Even though he is separated from his parents and in a hostile environment, Jamie maintains his dignity and youthful spirits, providing a beacon of hope for the others held captive with him.

Directed by Steven Spielberg. Screenplay by Tom Stoppard(with uncredited contributions by Menno Meyjes), based on the novel by J.G. Ballard.

Currently available for digital rental in the US on multiple outlets. JustWatch listing.
posted by DirtyOldTown (20 comments total) 2 users marked this as a favorite
I hesitate to imagine how racist this movie looks in retrospect (although some negative depiction of the Japanese forces invading China and putting people in camps seems...at least fair), but it did make me a member of the Christian Bale First Wives' Club (not literally in this case, of course!!! My friends and I use it generally to refer to spotting a notable actor long before their mainstream fame, like Jason Momoa in Stargate: Atlantis).
posted by praemunire at 1:03 PM on October 5, 2022

FYI: yes, Empire of the Sun is a novel, but it is based on young Jamie Ballard's own experiences in China during WWII.

how racist this movie looks

Not sure what this references, except for the very real racism of WWII-era Japanese towards the Chinese and English. Racism was found on every side at that time.
posted by SPrintF at 1:18 PM on October 5, 2022 [1 favorite]

I've never watched this movie, but a piece of music from its score has been an odd constant in my musical listening over some three decades.
posted by gauche at 1:21 PM on October 5, 2022

Not sure what this references, except for the very real racism of WWII-era Japanese towards the Chinese and English.

You have trouble imagining how an American movie (based on, I believe, a British book) depicting WWII Japanese soldiers might be racist? I would expect the number of 1980s Western films depicting Japan or the Japanese that didn't have some racism in them to be countable on the fingers of one hand.
posted by praemunire at 1:42 PM on October 5, 2022 [2 favorites]

I have not seen this movie, but oddly enough I just read this interview with JG Ballard a couple days ago. Mentions the book in passing.
posted by adamrice at 2:40 PM on October 5, 2022

P-51 Cadillac of the skies.
“If we’d died like the others, our bones would be in the runway”

You have trouble imagining how an American movie (based on, I believe, a British book) depicting WWII Japanese soldiers might be racist?

I don't believe it's possible to portray World War II accurately without depicting racism. Having read the book and seen the film, I don't recall the text or movie to be racist at all.
posted by SPrintF at 3:57 PM on October 5, 2022 [2 favorites]

I saw this movie years ago and it absolutely floored me. I don't know what I'd think of it now, but if it's as good as I remember I might call it Spielberg's best.
posted by Ursula Hitler at 8:25 PM on October 5, 2022

(based on, I believe, a British book) depicting WWII Japanese soldiers might be racist?

a book written by a Brit who spent two years of his childhood in a Japanese internment camp. It's an excellent read. The movie, though it goes full Spielberg every now and then, is nevertheless mostly a gem. And for the record, I don't recall ever hearing a Chinese or Japanese individual accuse it of racism.
posted by philip-random at 9:32 PM on October 5, 2022 [3 favorites]

I think I've only seen this once or twice as a kid, and I can still picture scenes from it clear in my mind's eye - the sort of conversation between the fence with the Japanese pilot teenager, the discussions overheard in the bedroom, the empty swimming pool. It had absolutely beautiful shots that were devastating and Bale reminded me so much of River Pheonix for that haunting beautiful grief expression they both can do that for years, I thought it was Phoenix in that film. Putting it back on my rewatch list for family movie night.
posted by dorothyisunderwood at 10:01 PM on October 5, 2022 [1 favorite]

I saw this way too often when I was just about the age of the main character. One of those movie experiences that probably affected me in ways I'm unaware of.

Maybe Spielberg's most surreal movie?
posted by CheesesOfBrazil at 3:48 AM on October 6, 2022

a book written by a Brit who spent two years of his childhood in a Japanese internment camp.

Guys, really, it should not be hard to imagine that an 80s American movie in part about a Japanese internment camp could have some racist aspects, even if, yes, internment camps are bad and even if, yes, it's based on a true story. I last saw this thirty years ago, when I was much younger, so I don't want to argue endlessly about a hypothetical, but...come on. When I saw the title pop up on FanFare, I thought, oh, that was a striking movie, I'd like to rewatch it, but I kind of fear what I might see with modern eyes.
posted by praemunire at 8:27 AM on October 6, 2022 [2 favorites]

I think people may be unintentionally misreading your question of "I wonder if this movie looks racist on rewatch" as the statement "I think this movie is racist after rewatching it," but mostly people are just trying to reassure you that thankfully, no, they don't think the movie is really racist.
posted by AndrewInDC at 11:53 AM on October 6, 2022 [2 favorites]

I went through a Ballard phase, and EotS is a powerful book. The film has some great images, but Spielberg mistakes Ballard’s theme that “children can get used to anything” for his own “childhood is magical.” It’s a good movie, but hits below its weight.
posted by GenjiandProust at 5:56 PM on October 7, 2022 [2 favorites]

As a rule, when I was a kid, going to the theatre wasn't a thing for our family. It was expensive, my parent's didn't see the appeal, and showtimes in our small town weren't exactly convenient.

That being said I do remember seeing ET (at a second run theatre, must have been nearly 2 years after release) and EotS. I was 10.

I can't say that I was at all ready for either of those experiences and have not watched either since.
posted by mce at 9:15 PM on October 8, 2022 [1 favorite]

There's a bit in the book -- and the movie, too? it's been years -- where one of the adults recommends to Jamie that he not pick the bugs out the rice, as they add B vitamins. It's stuck with me and I think of it surprisingly often.
posted by The corpse in the library at 1:48 PM on October 9, 2022 [3 favorites]

I just rewatched this. It's not great on race by 2022 standards (it centers white people relentlessly, received ideas about "Asian-ness" go unchallenged, a POC character is killed off to teach a white character a valuable lesson), but it doesn't have the overt racism that makes 1941 or Temple of Doom so cringeworthy. The Chinese and Japanese characters are pointedly humanized, and the first hour of the film systematically dismantles a privileged white kid's colonialist presumption that the world revolves around him.

The film has some great images, but Spielberg mistakes Ballard’s theme that “children can get used to anything” for his own “childhood is magical.”

But no matter how much Spielberg cranks up the sentimentality, Ballard's vision keeps coming through! It would be a better movie without the sentimentality, but I kinda feel like it's more interesting the way it is? It's like the movie is trying to be "E.T. in occupied China," but we keep getting moments that are more like Tideland or The Reflecting Skin. The scene that TWinbrook8 mentioned is presented like a conventional emotional climax, but what Jamie is actually experiencing in that moment is this bizarre nihilistic mania, and that's what makes it so powerful (at least for me). And the substitute-father thing with John Malkovich is almost self-parody -- it's Spielberg's most famous theme, but in this context it's totally pathological.
posted by Gerald Bostock at 6:09 PM on October 9, 2022 [1 favorite]

J. G. Ballard reflects on the book and the film.

some great stuff in there:

Hazy figures now had names and personalities, smiles and glances that I had seen in a dozen other films: John Malkovich, Nigel Havers, Miranda Richardson. With them was a brilliant child actor, Christian Bale, who uncannily resembled my younger self. He came up to me on the set and said: "Hello, Mr Ballard. I'm you."
posted by philip-random at 10:33 PM on October 9, 2022 [2 favorites] 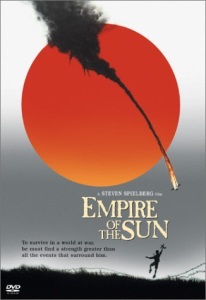