In this reimagining of Clive Barker's seminal Hellraiser franchise, a young woman must confront the sadistic, supernatural forces behind an enigmatic puzzlebox responsible for her brother's disappearance.


The new “Hellraiser” evokes Barker’s original adaptation in the same way a good cover song recalls its source material: with love, intelligence, and an inevitably crushing sort of redundancy. Nobody really needs “Hellraiser,” but it can sometimes be fun anyway, especially if you haven’t seen “Hellraiser” in a while. — Simon Abrams, RogerEbert.com

The latest Hellraiser is a massive step forward for the franchise after over 20 years of low-budget, half-hearted misfires. Old fans of the franchise and newcomers alike will no doubt rejoice in Bruckner’s respectful, albeit updated approach to the series, and of course its entertainingly extreme violence. — William Bibbiani, Consequence Film
posted by riruro (11 comments total) 2 users marked this as a favorite
The cenobite costume design was closer to what I remember the description in the Hellbound Heart-flesh twisted and fashioned into intricate "outfits." I did like the redesign of the box and most of cenobite designs. And this production did incorporate costume, set, lighting, and creature designs of the first two hellraisers in a fun and effective way. I admit I didn't get the same visceral effect from the special effects as I did from the original two films. I'm thinking specifically of the scenes where you have Frank or Julie walking around without skin or muscles. There was something to those effects that just...I still really feel them in a way I didn't experience with this movie. But that's a pretty high bar to clear and I don't fault the movie for that.

For me the real problem is I didn't actually like or care about most the characters. I mean the brother and his SO seem decent, but that doesn't mean I actually care about them and the rest? Honestly I got impatient with the movie killing them off because I really wasn't that invested. And part of that has to do with how predictable the plot is that Trevor was in cahoots with Voight. I mean hardly a shock there. But when you layer that onto almost no real character development the film becomes just ok. Riley does have a character arc, but I still didn't really care about her. I got to the end and was like "Eh...good for you" and that was the extent of my emotional involvement with her.

Now does that put it miles ahead of all the hellraisers aside from the first 2? Yes. And it is great it's opened the door to revitalizing the franchise. I have hope the next installment could be even more interesting, but this was pretty much a one time watch for me.
posted by miss-lapin at 6:34 PM on October 8, 2022 [2 favorites]

I had a bad feeling about this right away, when the film seemed to take for granted that we understood the Hellraiser milieu -- we knew what the Box was, why someone might be sacrificed in its honor, why there would be chains flying out of the walls. It's apparently a remake, not a sequel, but it's the kind of remake that presupposes you've seen the original. That's never good: it means the movie will be in a self-conscious quest to zig when you expect it to zag, because it knows you're comparing it to another movie. A good remake stands on its own. It knows why it exists. It has confidence! You're there to see it, not some other movie, because it's smart and cool and sexy, goddammit!

Once it introduces Riley and co, it seems to breathe a little easier, and even seems like it's maybe got a little something going on. It's unabashedly horny, as a movie like this should be, a little kinky, a little queer, and our heroine is a bit morally ambiguous. That's interesting: Kirsty wasn't quite an innocent final girl, but she certainly wasn't an addict who planned to solve her financial woes by stealing shit with her sketchy hook up. You get the sense that Riley is the kind of girl who...um...might be pretty interested in what the Box has to offer, actually, and that's definitely a new setup. Will it, in fact, turn out that our ostensible heroine wants to go to Hell and live deliciously?

Sadly, no, and I was just as disappointed as Pinhead seemed to be when it turned out Riley was a total square. The movie is kind of a square, too, replacing sex and fire and gore with...lore, for God's sake, and Luca from ER with some goofy skate key in his chest, and silliness about killing Cenobites by sticking them with a knife. Dude: aren't the Cenobites already fucking dead? They're zombies, or demons, or...something, I don't know, but they're not just normal people you can rip apart with chains. Fucking look at these guys! They're walking around with their internal organs hanging out, you can't just do that if you're a normal person! What the fuck!

However, Jamie Clayton was wonderful, as was whoever played the...lungy Cenobite. Gosh, is all I'll say about that.
posted by kittens for breakfast at 6:50 PM on October 8, 2022 [5 favorites]

Oh! And I forgot to mention: this is the director of The Night House, an underseen horror film that is, to be honest, a whole lot better than this. It's so good in large part because of a Toni-Collette-in-Hereditary level performance by Rebecca Hall, who I sure wish were in Hellraiser. What she could have done playing a Julia analogue, the thought gives me chills.
posted by kittens for breakfast at 6:54 PM on October 8, 2022 [1 favorite]

The biggest note I have for this is that the movie isn't actually about the Cenobites; it's a paranormal-thing-took-my-person-and-I-gotta-get-them-back movie.
posted by DirtyOldTown at 7:10 AM on October 9, 2022 [2 favorites]

I dunno, I quite enjoyed it? I had fun!

I definitely had to work through my distaste for the protagonist--reminding myself that not every Final Girl is virtuous--but on the whole, I had fun. I loved the recurring Lemarchand Box design motif, was pro-Trevor for a long time (because he wouldn't touch or have anything to do with the box which is rare for a horror movie character) until he was revealed as working with wossface, and for me, the Cenobites were like really shitty genies. Like, okay, make your wish but be really really really specific, and even then maybe write it down?
posted by Kitteh at 1:19 PM on October 9, 2022

Tough room! Watched it with Kitteh just above I'd say it was my favourite Hellraiser movie, yes, even including the first ones, which I thought were muddily shot, sloggily plotted, and super try-hard with the fetish stuff. I've forgotten most Hellraiser stuff, so I thought the little intro was good -- there's a puzzle box, you mess with it, goopy leather demons come and chain-zap you to hell.

It's hard with these things where the metaphysical and physical have to flip back and forth for the conceit of the movie to work at all, so where it rubbed me the wrong way was generally all the points that the Cenobites became basically just rubes, blundering into rooms and getting stabbed with stuff and stuck in a gate like a cat that underestimates its ability to squeeze through the pet door.

But: it wasn't a super idiot ball plot; were I Riley I would have written off my brother and thrown the thing in a lake from the jump, but if you accept that she really, really wants to bring her brother back, the whole thing holds up. I didn't see the Trevor plot twist coming, which makes me maybe a bit thick, but I thought he was actually a pretty great character (while not a great person) in the end; he's all about self-preservation, so of course his switch flips to actually let's just run away from all of it when he's away from the house, to sure thing boss when Geary McGear-Chest is about to gut-gear his face or whatever.

Hell of a dedicated roommate, though.

The set and prop design was top notch; little art deco splashes everywhere from parquet flooring to clothing choices. The Lemarchand flourishes increase and converge the more Riley gets drawn into the world of the box. I thought the "hell enters our world" effects were great, with the van sequence highly effective and just generally liking the Escher-meets-House of Leaves flourishes of impossible hallways introducing themselves at odd angles.

I kind of wish this were the first Hellraiser movie, to be honest -- I think there's been enough half-good Hellraiser and enough absolute crap Hellraiser that everyone has their mental map of what a great Hellraiser property would be, which this can't possibly live up to.
posted by Shepherd at 6:14 PM on October 9, 2022 [2 favorites]

I enjoyed this! It worked by calling back to the series, then resets with Riley and Trevor thing before diving back into the Cenobites.

I'd love to have a repro of some of the book/ notes props.

Yeah, no kidding. Agree also with the impaired Cenobites.
posted by porpoise at 8:30 PM on October 9, 2022

For me, this was solid and moderately enjoyable. But if I'm being honest, I really wanted more. I wanted Bruckner to challenge us with the morbid hedonism of the Cenobites, the whole pleasure from pain taken to extreme lengths thing of the book.

You could have replaced the Cenobites with demons and the movie would be more or less the same. Why/how they were evil was kind of incidental.
posted by DirtyOldTown at 11:05 AM on October 10, 2022 [1 favorite]

I was a little uneasy at first, because to me Doug Bradley is Pinhead, but Jamie Clayton really made it work. It's two different approaches to the same character, and they both work.

Bradley's is more of what I like to think of as The Old Jaded IT Guy Who's Seen It All. ("You've done this before, right?" "Many, many times.") He's got a job to do, takes pleasure in seeing it done well, but will not put up with any more nonsense than he absolutely has to.

Clayton's Pinhead, on the other hand, strikes me as more of an artist. She's a bit more theatrical and analytical, wanting to get the maximum aesthetics out of anything she does. She's creepy and otherworldly and ungrounded in a way that Bradley's isn't quite, and it's all really interesting to watch.
posted by Mr. Bad Example at 12:48 PM on October 10, 2022 [6 favorites]

Bradley's is more of what I like to think of as The Old Jaded IT Guy Who's Seen It All. And now I'm thinking of Pinhead saying "Have you tried turning it off and turning it back on again?"
posted by miss-lapin at 4:23 PM on October 10, 2022 [2 favorites]

"I didn't know the puzzle would do that!" 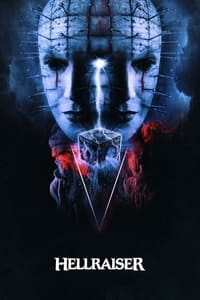