Honor's sole focus is getting into Harvard. Willing to do whatever it takes, Honor concocts a plan to take down her top three competitors, until things take a turn when she unexpectedly falls for her biggest competition.


After getting bombarded with ads for this while watching various Star Treks on Paramount+, I finally decided to check it out yesterday, believing it to be a streaming series. It's not. What it is is a lot closer to if you put Clueless, Election, and Mean Girls into a blender and updated them for 2022.

The movie leans heavily on to-the-camera asides, especially during its first half (though not quite of the She-Hulk or Deadpool variety. Honor isn't aware of the medium she's in in quite that way) but the lead performance from Angourie Rice (Senior Year, the recent Spider-Man movies) and the supporting cast (including Gaten Matarazzo or Stranger Things and Christopher Mintz-Plasse of Superbad, as well as many excellent mostly-unknown faces) make it all work.

So that's where I've seen her! I really liked her high school news anchor bits in the films; I was assuming that she seemed familiar because she looks a lot like Reese Witherspoon as Tracy Flick. I've also gotten those ads, and was on the fence about watching this, but I think I'll have a look-see.
posted by Halloween Jack at 2:13 PM on October 22, 2022 [1 favorite] 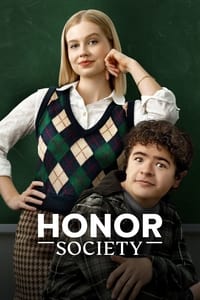