The Antichrist is a 13-year-old girl; after her powers manifest following her first period, her dad (aka Satan) reappears in her life, much to the dismay of her mother, who has devoted her life to fighting Satan and his minions. It's the first adult animation show from Canada's Atomic Cartoons, and stars Lucy DeVito, Danny DeVito, and Aubrey Plaza voice-acting the above characters. [CW for animal sacrifice, nudity, and buckets of gore, sometimes in actual buckets IIRC.]


In addition to the above VAs, the show also features a murderers' row of guest VAs; see the tags for some of them. The general style of the show is that of a horror/fantasy/religion-centered Rick and Morty (Dan Harmon is one of the executive producers), but with more of a episode-to-episode continuity. No word on whether FXX (the parent network) is renewing yet. Streaming on Hulu.
posted by Halloween Jack (9 comments total) 1 user marked this as a favorite
I felt that this show, like a lot of shows, was pretty clunky at first. I stuck with it, as I found it mildly entertaining while they built the backstory up. I think it was episode seven where I really enjoyed it without any caveats. Maybe too late for some people, but a lot of shows just take some time to get going.

I still have a couple of episodes to watch but it’s been enjoyable and interesting. The dynamic of a teen torn between her strict but reliable and present single mom and an absent but free-wheeling deadbeat dad is not one I’ve seen a lot in genre shows. My one complaint is that Chrissy and Satan’s demonic powers are treated more like superpowers from a superhero movie than unholy powers from a horror movie.

I tend to watch this after Lower Decks, thus getting a double dose of Eugene Cordero, which is not enough Eugene Cordero. Looking forward to season 2 of Loki!
posted by ejs at 5:26 PM on October 22, 2022 [3 favorites]

What is middle school but Sisyphus pretending to love the rock?
posted by hototogisu at 5:35 PM on October 22, 2022

I've got to watch this, but I'll be mentally comparing it to Adult Swim's early production of Lucy: Daughter of the Devil, which had H. Jon Benjamin as The Devil and Lucy dating D.J. Jesus.
posted by mikelieman at 5:21 AM on October 23, 2022 [3 favorites]

Huh. Never heard of that; it's by the creator of Bob's Burgers, and there are a few bits/trailers on YT. Animation is kind of potato quality but I like the premise, may check it out.
posted by Halloween Jack at 12:20 PM on October 23, 2022

I enjoyed this. Particular favorite bits include the thousands of siblings and Satan’s bartender snake.
posted by billsaysthis at 7:57 PM on October 23, 2022 [1 favorite]

There's not only a Filipino family, but a manananggal appears in 2 episodes (but the way they pronounce it is a little odd).
posted by kurumi at 2:14 PM on October 25, 2022

Just found out about another cartoon, Human Kind Of, that was on Facebook Watch (link here), and if the showrunners of Little Demon haven't seen it then it's a heckuva case of parallel evolution: demi-human teenage girl gets powers (and consequences) with her first period, and her mom and best friend are caught up in it.
posted by Halloween Jack at 10:14 AM on January 28 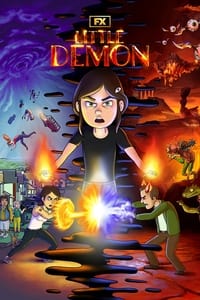