Two hundred years after Lt. Ripley died, a group of scientists clone her, hoping to breed the ultimate weapon. But the new Ripley (Sigourney Weaver) is full of surprises... as are the new aliens. Ripley must team with a band of smugglers to keep the creatures from reaching Earth.

Directed by Jean-Pierre Jenuet. Written by that dude who did TV Buffy.

Currently streaming in the US on Starz. JustWatch listing.
posted by DirtyOldTown (20 comments total)
I have a weird relationship with this movie as I saw it in the theater (big fan of the Alien film and JPJ at that point) and adored it, and have never successfully made it through the whole thing on home video. I need to get a nice 4k version of this and give it another go.
posted by DirtyOldTown at 10:52 AM on October 26, 2022

There was an interview with Joss Whedon - who I never really liked long before it was popular not to - where he was saying that Jeunet had done his script wrong, and I thought that he had it the wrong way round. Didn't have any particular opinion of the script - you could throw out his script and bring in someone else's for all I care - but I love the feel of it - the collision of the French aesthetic and Hollywood sci-fi making it a companion piece to The Fifth Element, at least in my defective head. It convinced me that in order to have an Alien movie you needed an Alien, you needed Sigourney Weaver and you needed an auteur giving you something completely different from all the other Alien movies, and this delivered. It has Jeunet, it has Weaver, it has Dominique Pinon and Ron Perlman, robot Winona and Dan Hedaya glowering. I honestly don't need anything else.
posted by Grangousier at 11:01 AM on October 26, 2022 [8 favorites]

As I’ve said before, the writer and the director are both individually capable of some quite good creative work, but as a pair they are a chalk-and-cheese combination.

This bit of dialogue:

“I thought you were dead!”

That is a perfectly in-character bit for, say, Season 6 Buffy, but weirdly wrong for Ripley.
posted by ricochet biscuit at 11:24 AM on October 26, 2022 [4 favorites]

I tried watching this again not long ago, and the whedonisms have not aged well. His style calcified at some point into the Eliza program that they use to write Marvel movies, and I think that even if he hadn't been exposed as a creep, his dialogue pattern would have become tired by now. A victim of his own success, I guess, until he became a victim of his own...boner? Can I say that? Oh, yeah. I went there. Yup. There is where I got to. Boom. Um...gangham style. Okay.

It still looks great, though. Curiously, Alien Resurrection looks more like Moebius worked on it than the Alien movie Moebius did work on!
posted by kittens for breakfast at 11:38 AM on October 26, 2022

I like it more (or maybe dislike it less) than many other viewers, but it is raggedly and desperately uneven. If there is any virtue I can attribute to it without an asterisk, it is that the Betty and her crew seem to be an embryonic/prototype/rehearsal version of Firefly (much as The American President is the distant early warning for The West Wing.
posted by ricochet biscuit at 12:12 PM on October 26, 2022 [1 favorite]

I don't care - I love this movie, and often defend it.

The cannon of a android rebellion (they still bleed milk!), a far future that still has undesirables and riffraf and corruption. Using a wheelchair to hide disassembled gun parts.

Call using various canned bad breath to fool the breathalyzer locks. The "freeze dried whisky." Michael Wincott is great in this, my having imprinted on him from The Crow. Brad Dourif being Brad Dourif.

Weaver's no look behind the back hoop shot - it wasn't the first try, but it was for real.

The underwater scenes. Ripley flamethrowing the other (preserved - except for one live one) clones.

The hybrid alien getting sucked out of a puncture in the ship's window.

I don’t remember much about this movie except, probably unfairly, that Winona Ryder does not make a convincing android.
posted by Glinn at 4:21 PM on October 26, 2022

I don’t remember much about this movie except, probably unfairly, that Winona Ryder does not make a convincing android.

Tbh that's about my only memory of it too, and being disappointed because I really liked her. (Still do, just this role this movie didn't do it for me.)
posted by solotoro at 5:31 PM on October 26, 2022 [1 favorite]

As I’ve said before, the writer and the director are both individually capable of some quite good creative work, but as a pair they are a chalk-and-cheese combination.

That's my take on it. Yes, there are some lines that are absolute clunkers--Ripley's "who do I have to fuck to get off this ship", Ron Perlman's character going "must be a chick thing"--but the main problem is that the script is just a mismatch with the director, who's got his own thing going and doesn't seem to get the jokes in it very well. And even though he does have a great visual style, there are other missteps, such as the human/alien hybrid originally having a giant inflamed vulva on its abdomen that ended up being removed at great expense. I'd also pick at the casting: Dan Hedaya was generally OK, but his death scene was some bizarre, pop-eyed overacting. And, for someone who gets equal billing with Weaver and a lot of screen time, Winona Ryder simply doesn't have a lot to do; I'd put that one on Whedon, since, if this was indeed a sort of dry run for Firefly, then Call was the proto-River Tam: pretty waif, incredible innate abilities, not a lot of characterization. If I could have had a crack at the script, I would have turned Call into Dietrich, the Colonial Marines medic in Aliens who's the first in the platoon to get taken, and whose fate (along with Sgt. Apone) has often been speculated about among fans, since, even though it's believed that they were implanted, you don't actually see them in the nest. That way, you'd have a parallel character to the resurrected Ripley, and run through the possibilities of her having been rescued (somehow) and frozen, or being a descendant of the original Dietrich, or being a clone herself, before her turning out to be an android.

Well, regardless of clunky lines, Weaver does some excellent creepy work as the hybridized Ripley; you've also got Brad Dourif who's in a dead heat with the other scientist guy as the skeeviest scientist on the ship. The scene with the preserved prototypes, which is somehow worse than their appearances in the nightmarish credits sequence. Ron Perlman having fun just being the absolute worst. It's by no means perfect or even great--I've seen it a bunch of times and still don't know the names of half the crew of the Betty--but it was still pretty darn good and had the potential of being great.
posted by Halloween Jack at 9:47 PM on October 26, 2022 [2 favorites]

For all this movie's virtues and shortcomings, it did give us the "your attention please, security breach" sample that lead off the Front Line Assembly remix that lead off the Headhunter 2000 remix collection, and which was probably the greatest banger ever to grace my minidisc collection during the five or so years of its existence.
posted by 7segment at 10:16 PM on October 26, 2022 [4 favorites]

Can't have Dietrich as the third android reveal in the series - name needs to start with a C.

You know what doesn't work? Prometheus. See, I was making a suggestion to make this movie better.
posted by Halloween Jack at 5:00 AM on October 27, 2022

I saw this in the theater and I don't think I've seen more than a few bits here and there of it since. I recall thinking it was better than Alien3, but not great. There were some solid moments in it - Ripley walking through the gallery of failed Ripleys, as I recall, was wonderfully creepy.
posted by rmd1023 at 6:20 AM on October 27, 2022

It certainly looked better than Alien 3. I like that they took such risks on creative control for the films, even if it didn't ultimately work in this case.

I've declared this elsewhere: It's high time that the Alien franchise meets the droll bourgeois angst of Whit Stillman.
posted by Jessica Savitch's Coke Spoon at 4:11 PM on October 28, 2022

“I know Joss Whedon said some bad things about me,” says Jeunet. “I don’t care. I know if Joss Whedon had made the film himself, it probably would have been a big success. He’s very good at making films for American geeks – something for morons. Because he’s very good at making Marvel films. I hate this kind of movie. It’s so silly, so stupid.” About the changes he made to Whedon’s script, Jeunet jokes: “Too bad, Joss Whedon!”

Am I a Joss Wedon fan? I feel so dirty now.

I hate this kind of movie. It’s so silly, so stupid.

Good thing the movie you made, complete with goggle-eyed Dan Hedaya and guards snapping their chewing gum, wasn't silly and stupid. Because then your statement would be, you know, silly and stupid.

(I've nothing against a silly, stupid movie. The Fifth Element is silly and stupid and is very multipass. But T5E isn't set in a pre-existing universe whose primary schtick is a worn, workaday aesthetic that doesn't really tolerate silly and stupid.)
posted by GCU Sweet and Full of Grace at 5:04 AM on October 31, 2022

That's a great interview, because in context Jeunet is not simply doing the "Marvel movies are bad" argument.

He's saying Alien Resurrection started from that camp and he knew it, but figured that if they were willing to back a truck of money up to let him get weird, he might as well play in that sandbox as a one-off and see what it was like.

He 100% would agree the script he worked from is corny and commercial in the same ways as Marvel movies. He's not patting himself on the back for being above that or claiming he beat them at their own game. He's saying he got invited to the party by mistake and figured he may as well do what he does there.
posted by DirtyOldTown at 9:55 AM on October 31, 2022 [1 favorite] 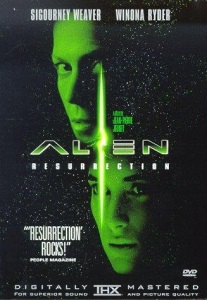