The small city of Tarker's Mill is startled by a series of sadistic murders. The residents decide to hunt down the killer. However, many of these vigilantes end up dead, and those who don't are no closer to finding an assailant.


But, when a young wheelchair-using boy named Marty encounters a werewolf one night, the pieces begin to come together. Along with his sister and Uncle Red, Marty begins a mission to capture the werewolf once and for all.

Roger Ebert surprisingly gave the film 3 out of 4 stars.

It ranks 45% on Rotten Tomatoes.

Ebert seems to be going for the so-bad-it's-hilarious angle on his rating. I remember the book as being not one of my favorites of King's, but an interesting experiment, as the "cycle" refers to the fact that each chapter takes place in a successive month, when the werewolf appears; it might have been better if each chapter had been published in the corresponding month as a serial, not unlike what King would eventually do with The Green Mile, maybe in something like The Magazine of Fantasy & Science Fiction.

Anyway, Ebert correctly notes that "Who is the werewolf? I was able to guess almost the moment he walks onscreen. See how you do." Literally about the only thing that I remember about the movie is that moment, and he's right.
posted by Halloween Jack at 5:10 AM on October 31, 2022 [1 favorite]

Actually Ebert thought the movie was satirical and that's why he rated it so highly.
posted by miss-lapin at 10:29 AM on October 31, 2022

I really like this one, both the source material and the film. It might be the best use of Gary Busey as the uncle that the kid loves but the parents don't quite approve of.

If I have a complaint it's that the film follows a pretty straight line without too many surprises.
posted by slimepuppy at 2:25 PM on October 31, 2022 [1 favorite] 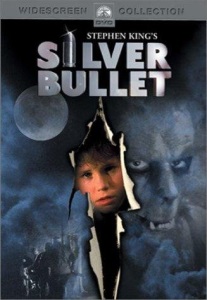