A starship crew in the 23rd century goes to investigate the silence of a distant planet's colony, only to find just two survivors, a powerful robot, and the deadly secret of a lost civilization.


Starring Walter Pidgeon (veteran actor from How Green Was My Valley and Mrs. Miniver), newcomer Anne Francis, and a young Leslie Nielsen, this film is considered a classic of the sci-fi genre; some of the production values verge on the slightly-silly (the starship crew are all in silver unitards, for one), but the story itself takes some thought-provoking twists. In fact, some critics assumed it was loosely inspired by Shakespeare's work The Tempest, although there isn't any definitive proof this is the case.

* "Robby the Robot" was built to allow for a small-statured stuntman to sit inside and operate the controls, much like Kenny Baker did for the R2-D2 droid model. One of the stuntmen was actor and former acrobat Frankie Darro, who had sadly developed a bit of a drinking problem. He was fired early on in the production after having had a "five-martini lunch"; when he returned to set, he nearly fell over while trying to walk inside the expensive Robby model.

* Many of Anne Francis' early costumes were skimpy, a trait which was remarked upon within the film. Her costumes were so skimpy, in fact, that the film was banned in Spain for ten years.

* Many of the props and sets were re-used in various episodes of The Twilight Zone - the full-scale mock-up of the base of the ship was used in the episodes "To Serve Man" and "On Thursday We Leave for Home", and the blaster pistols and rifles, crew uniforms, and even Robby the Robot were used in other episodes.

...This post has been sponsored by a donation from hanov3r!
posted by EmpressCallipygos (15 comments total) 5 users marked this as a favorite
Thanks, EC! That's another $5 from the #fund-ff tag. What is that all about? Glad you asked.
posted by DirtyOldTown at 9:15 AM on November 9, 2022

This movie is so many kinds of awesome. Pidgeon is masterful in his role. The f/x were truly stunning for the time, and (IMO) hold up very well in 2022. The "music" - actually called (IIRC) "electronic tonalities" were a brilliant touch that set it apart from more traditional sci-fi films.

I've always had an attachment to this movie. It's one of the few I own on DVD.

The soundtrack is the first to use all electronic music. Learned that in Music Tech class!

There was (is?) an off-broadway production called "Return to Forbidden Planet". It was basically the same story with repurposed 60's songs and lots of Shakespear quotes to drive home that "inspired by the Tempest" thing ("Two beeps or not two beeps?") It was campy and during the final credits a big pink beach ball was tossed around the audience while "Wipeout" played. So much fun it made Phantom seem like a miserable experience when we saw it that evening. Oh, hey, there's a Wiki page for it!

My DVD copy has this intro by Lavar Burton who pointed out how much this movie seemed to influence Star Trek TOS. I remember him specifically mentioning "the white male triumvirate".

I was happily surprised by the plot itself, and the ultimate reveal of what the Big Bad Danger actually is. First I thought it was Morbius - there were a lot of moments where I thought he was going to somehow turn on the others and reveal that he was Secretly Evil, but then he didn't do that. ...and then I learned in some respects, he was connected to the Big Bad Danger in ways I didn't forsee. I like getting surprised like that.

Not so thrilled about the mild slutshaming Altaira faces, but...product of its time, I guess.
posted by EmpressCallipygos at 10:33 AM on November 9, 2022 [1 favorite]

how much this movie seemed to influence Star Trek TOS

Roddenberry has said publicly that there's no influence, but some of his correspondence suggests otherwise. And, one might even think that his casting Warren Stevens as Rojan in TOS: "By Any Other Name" might have been influenced by his rock-solid appearance as Doc Ostrow.

I love this movie. As a kid, my dad collected 16mm films (and we had a few old Bell&Howell 16mm projectors that school A/V nerds might recognize), and I remember proudly showing "Forbidden Planet" at my 12th birthday party (my friends did NOT appreciate it anywhere near as much as I did).

Altaira's treatment is not a good look by today's standards, for sure, but Anne Francis's performance stands up well, especially against heavy hitters like Pidgeon and Nielsen.

This film sits firmly atop my “if i’m channel surfing and run across it, i’m stopping and watching” list. I seriously love this film. I would absolutely love to see it on the big screen, if such a chance ever arose.
posted by Thorzdad at 1:28 PM on November 9, 2022 [3 favorites]

I love watching my man Jack "Bart Maverick" Kelly as an unrepentant space letch.
posted by The Underpants Monster at 3:07 PM on November 9, 2022

I remember my dad showing me this for the first time when I was a kid. He was so excited for me to see it even though he had to explain a lot of it. But I loved (and still love robots) so I was immediately won over by Robbie among other things. But when my dad told me the hero was Leslie Nielsen from Airplane! I was totally amazed!
posted by miss-lapin at 5:19 PM on November 9, 2022 [2 favorites]

The depiction of Altaira, let alone the slut shaming, and gender as a whole, is pretty cringy. She gets scolded for wearing revealing clothing, or no clothing at all, because the boys just can't help themselves, I guess. Not her fault, really, but then she's depicted as having few interests other than her own vanity. She asks Robby to make her a new dress, and you can practically see him rolling his robot eyes, replying, "Again?". Not much curiosity, despite having never seen another human being other than her father. Altaira just isn't very interesting other than having cheesecake value. Maybe it wouldn't have played well otherwise, but what a missed opportunity.

The soundtrack is beyond compare to this day.

The depiction of the Id monster crossing the force field looked pretty abstract to me when I saw it broadcast over the air as a kid in the 70s, it wasn't until I saw it on video on a decent tv years later that I realized how much the Id monster looked stylistically totally like 50s MGM animation department.

I always had a soft spot for character actor Earl Holliman, and his comedic relief performance (another that probably hasn't aged that well) as the drunkard cook, is my favorite.

But what I really loved loved loved was the exploration of the planet's interior, where you start to get a sense of scale how grandiose Krell civilization was (possibly inspired the interior of the Death Star). Which I think somehow has been etched into my mind to create a recurring nightmare I've had for decades... being lost in a large building full of endless mysterious humming automated machinery all by myself...
posted by 2N2222 at 7:18 PM on November 9, 2022 [1 favorite]

Re: the "electronic tonalities": The composers on the film had to content themselves with that credit because electronic music was so innovative and unusual at the time that they weren't considered musicians. This also meant they couldn't be nominated for an Oscar.
posted by The Tensor at 10:38 PM on November 9, 2022 [3 favorites]

...it wasn't until I saw it on video on a decent tv years later that I realized how much the Id monster looked stylistically totally like 50s MGM animation department.

Except, the animations were done by Disney animator Josh Meador, loaned to MGM for this production. His technique for the Id monster is pretty interesting. Per Wikipedia...

Unusually, the scene in which the Id Monster is finally revealed during its attack on the Earth ship was not created using traditional cel animation. Instead, Meador simply sketched each frame of the entire sequence in black pencil on animation stand translucent vellum paper; each page was then photographed in high contrast, so that only the major details remained visible. These images were then photographically reversed into negative and the resulting white line images were then tinted red, creating the effect of the Id Monster's body remaining largely invisible, with only its major outlines illuminated by the energy from the force-field and blaster beams.

Ahh, yes, that makes total sense. I didn't mean to be so specific. Rather, I found the Id monster to look like a cartoon of the era, rather than the abstract monster it appeared to be on a snowy tv broadcast.
posted by 2N2222 at 4:51 AM on November 11, 2022

Ah, gotcha! Totally agree on that. I remember seeing the movie on a crappy tv, too, and, yeah, it was definitely a different vibe than the monster I saw later via a good print on a good tv.

Still one of the scarier movie monsters, really. The shape of the thing, with it being almost all mouth, and the angry electronic “roars” when it is caught in the force field.

The movie has a lot of nice design touches like that which help keep it feeling “futuristic” in a good way. Like how the hand blasters, and even the big “cannon” blaster, don’t make any noise when they fire (or, maybe they make a small little “blip”?) which is so different from the usual screeching of most movie blasters.
posted by Thorzdad at 5:29 AM on November 11, 2022

I remember seeing the movie on a crappy tv

I remember it now, a late night movie on a little red and white plastic-cased 13" b&w set on the floor of my bedroom during a sleep-over.
posted by mikelieman at 6:40 AM on November 11, 2022 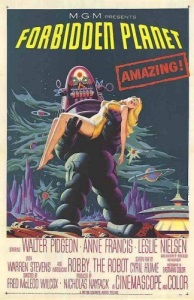