"If the concrete at the base of my building is cracked, if it slips half an inch, cracks appear. Cracks appear, and they will grow and grow, and one day the whole thing will collapse. You make one mistake, one little fucking mistake, and the whole world comes crashing down around you."

Much of Locke's conversation has to do with concrete. Locke is the manager of a major construction project and an apparent expert in pouring concrete, which, as we learn, has to be handled delicately and precisely. Tomorrow is the biggest pour of his life, and part of the texture of "Locke," its feeling of reality, is in hearing specific details of Locke's work, as though eavesdropping on a series of conversations. There is always more than we can fully understand, but we can follow along.

Knight keeps the camera focused on Locke for the full duration. That keeps it pure, in dramatic terms. We never see the people he's talking to, simply his face, the road, raindrops on the windscreen and the spectral highlights of lights on the motorway. This requires an extraordinarily delicate performance from Hardy, as a man having the worst night of his life. He comes at the role with superb control, a sense of manly duty and quiet repentance. Locke is above all a rational man, an engineer. All problems can be solved, he keeps repeating; I'm going to make this right. After each phone call, his world edges closer to collapse. Wife, kids, job, reputation – all in the balance.

Knight’s central gambit [...] is that this film begins after the protagonist has already made the decision that will determine his fate. Locke is a bastard himself, and his upbringing has convinced him that there’s nothing worse a man can be. (It’s no accident that his boss is listed as “bastard” in his phone’s contacts.) Locke has committed to being present for the birth of his bastard child, and Knight’s script never doubts the integrity of that commitment, nor violates it by contriving to raise the stakes. Locke repeatedly tells the voices on the other end of the line that he “doesn’t have a choice,” when the truth is that he’s simply made it already. As a result, the film is essentially a war of attrition between emotion and pragmatism, the rare thriller fueled by stress rather than speed.


posted by We had a deal, Kyle (5 comments total)
Watched this on HBO Max a few weeks ago and it's really stuck with me. It largely rests on Tom Hardy's shoulders, of course, but the rest of the cast -- appearing in voice only -- are uniformly great too.

The one bum note for me -- and one noted in many of the contemporaneous reviews -- was the multiple "Locke rages against his father" scenes which felt both a bit too stagey and a bit too reminiscent of Clint Eastwood talking to the empty chair at the 2012 RNC.
posted by We had a deal, Kyle at 1:39 PM on November 9, 2022

This is one of the handful of movies which left a lasting impression on me. One man and a phone, and you sit there for an hour and a half, absolutely glued to the screen.
posted by gakiko at 9:40 PM on November 9, 2022 [2 favorites]

I also watched this a few weeks ago. To me, it definitely had the feel of a one-person play, even with the off-screen voices. Apparently, the making of the movie was pretty grueling, which added to some of the tone. I agree that the parts where he's talking to his dad didn't fit in with the rest.
posted by lilywing13 at 2:48 AM on November 10, 2022

Reading the SF Chronicle review: "As played by Hardy, Ivan Locke is a formidable character, one who doesn't have to raise his voice or alter the lilt in his polite Northern accent to convey power."

Tom Hardy is very much not doing a "Northern" accent but is doing a Welsh accent that veers around a fair bit, although generally not distractingly so. I have no idea why he decided to do a Welsh accent as there's no plot-based reason for it at all. My slight suspicion is he wanted to make a role where the camera is on him for 90 minutes even more showy, but I can forgive Hardy quite a lot, so no real issues with the choice. Good film.
posted by Hartster at 5:44 AM on November 10, 2022 [1 favorite] 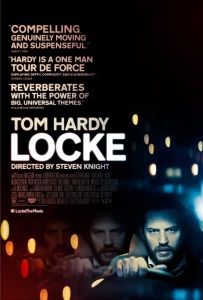