When a secret marriage is planned between Othello (Orson Welles), a Moorish general, and Desdemona (Suzanne Cloutier), the daughter of Senator Brabantio (Hilton Edwards), her old suitor Roderigo (Robert Coote) takes it hard. He allies himself with Iago (Micheál MacLiammóir), who has his own grudge against Othello, and the two conspire to bring Othello down. When their first plan, to have him accused of witchcraft, fails, they plant evidence intended to make him believe Desdemona is unfaithful.

Directed by Orson Welles. Screenplay based on the play by Shakespeare, with uncredited adaptation by Welles and Jean Sacha.

Currently streaming in the US on Criterion, Plex, FreeVee, and FilmBox. JustWatch listing.
posted by DirtyOldTown (3 comments total)
Orson Welles, being a first-half-of-the-twentieth-century, was progressive enough beyond the standards of the time not to wear out and out blackface, but he does use a kind of subtle, dusky makeup that still wouldn't fly in 2022.

There arguably isn't a finished version of this. There are at least five versions in existence, including the one that won the Palme d'Or in 1952 (available solely on French VHS), the controversial 1992 "restoration," and an American cut released in 1955, which was re-issued by Criterion.

This has the same issues with sound syncing that are in nearly all of Welles' post-Hollywood work. You'll be grateful for the captions.

That should say "first-half-of-the-twentieth-century liberal" above. Eh, well.
posted by DirtyOldTown at 3:46 PM on November 9, 2022

Good lord, it’s been ages since I last saw this. I think I recall it being quite good. I also think I recall it being difficult to get past Orson in not-quite-blackface and a nappy wig. Not for racist issues, really, but because it just doesn’t quite work. One does wonder, though, given the era, if he would have been able to get any funding at all for the film had he cast a black actor in the lead?
posted by Thorzdad at 3:49 AM on November 10, 2022 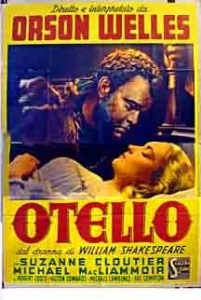