Chefs are offered a chance to share their stories and business dreams while going head-to-head for a life-altering prize. Hosted by Dan Levy with judges Sohla El-Waylly and Will Guidara.
posted by BlahLaLa (8 comments total)
I'll admit that Sohla's what got me to tune into episode one. And so far...it's just fine? Not hating it, not massively adoring it, but definitely willing to watch more episodes to see how it grows. For me, most cooking competition shows (well, really GBBO) are more fun the further you get into them, as the contestants become better known. So I'm hoping that's what'll happen here.
posted by BlahLaLa at 10:05 AM on November 11, 2022

My only hesitation is the oft-quoted observation from Anthony Bourdain that brunch is the bane of the cooking industry, a dumping ground for lazy ideas and leftovers, almost entirely bereft of imagination or innovation.

That said, I am a big goober who can get unreasonably excited about big plates of bacon and eggs, so I don't know who I am kidding here. They'll probably make stuff I'd be glad to eat.
posted by DirtyOldTown at 11:10 AM on November 11, 2022 [1 favorite]

DirtyOldTown, based on episode one, it seems very much not like standard brunch fare. Definitely not leftovers...and the one person who perhaps illustrated lazy ideas was in fact the person eliminated.
posted by BlahLaLa at 12:16 PM on November 11, 2022 [1 favorite]

I don’t know if I can fully agree with Anthony Bourdain, there - Brunch is at least partially breakfast, and innovation is just sort of physically unappealing at breakfast time. I’m seeing that this week at home as I’ve been trying out some fancy oatmeal recipes, and despite being way more interesting (and delicious!) than what I usually make, have been rejected by the family as overly novel and fussy vs. the old standards.

I don’t disagree that brunch is often not innovative or imaginative, but it’s more that the sort of comfort people are seeking at breakfast is not entirely compatible with it.
posted by Jon Mitchell at 7:36 AM on November 12, 2022

I watched the first episode and this was pretty fun. The (better) contestants had an interesting mix of thoughtful focus/technique on the successful elements we think of as brunch (the perfect scone!) or refreshingly non-US ideas of what breakfast can be. I should have known from the hosts and judges that it wouldn't be people gunning for viral-style maximalism, but I've been hurt before, so.

Okay I've watched the first three (all that's available for now) and I think it's a nice show but also not really anything special...yet. I'm always here for Sohla, though, so I will keep watching. (And probably just want more Sohla-forward material in the world in general.)
posted by BlahLaLa at 11:22 AM on November 12, 2022 [2 favorites]

Sohla is the best part of the show.

I thought this was such a good show. All three of Dan, Sohla and Will had a great chemistry, and were lovely people. Will was new to me, but I thought he was great. Obviously I stan for Sohla, who doesn't (she looked like a silent film starlet in the finale!) and Dan was really good. Side note - he was one of the hosts in the first two seasons of the Canadian version of GBBO. And I thought he was really not very good there; he was a little awkward, had no chemistry with the other host (who was worse) and their banter felt scripted, and not scripted well. But this show felt like he had a strong vision, and a labour of love. His last show won literally all the Emmys, and his next move is this? Obviously something close to him.

The exchange in episode 1 that summarizes every aspect that makes this show good - the chefs are cooking their first challenge, and Will and Sohla are talking.
S: No, they're so focused. This is good.
W: I hope there is no villain in this group, honestly. Every reality television show, there's a villain.
S: I feel like we're the villains.
W: We're-- No, I don't want to be the villain.
S: (laughing) I think we're gonna be the villains.
I really liked the more relaxed feel, the warmness of everything. It just felt loose; like the random chat between the judges that was just entertaining. The breaking of the fourth wall to show that the restaurant is a soundstage.

One thing that did clank with me was the casting of Danielle. I liked her as a person, and was glad to see a pastry chef treated with the same respect as a traditional savoury chef. (Sohla had a nice bit calling that out in one episode.) But there are all these other contestants who are teaching at-risk youth having had their own run-ins with the law, and operating a pay-what-you-can vegan restaurant out of a closing church and so on. And then here's someone who lives in a very nice house in a suburb where the median income is almost $200K, and she has a staff of at least 8 and sells a million muffins a year, and her dream is to sell frozen scones in every upscale supermarket in the country. It's a great goal for her and where she is in life, and I hope she succeeds, but it just felt like she came from a different show with a different ethos. Even the prize -- to get into food manufacturing in New York City, what does $300K even buy? She needs 3 million. (And between the bump in profile and the various contacts she's made in this show, I would not be surprised if she gets it.)
posted by Superilla at 11:14 PM on January 7 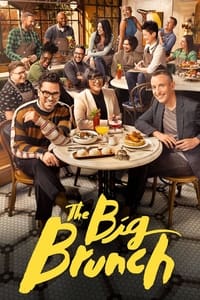