Martin Blank is a professional assassin. He is sent on a mission to the Detroit suburb, Grosse Pointe, and, by coincidence, his ten-year high school reunion party is taking place there at the same time.

In one version of the scene where Martin walks into Debi's radio booth for the first time, Minnie Driver decided to let her character put all the cards on the table and just kiss John Cusack. George Armitage said, "It was just wonderful, completely out of the blue. You should have seen the smile on Johnny's face afterwards.

According to George Armitage, he "basically shot three movies simultaneously": one that stuck to the script, one that was "mildly understated," and one that went "completely over-the-top." The over the top footage was mostly used in the film.

K. Todd Freeman (Kenneth McCullers), Carlos Jacott (Ken), and Michael Cudlits (Bob Destepello) all had roles in the third season of the series Buffy the Vampire Slayer: Mr. Trick (3.3 "Faith, Hope, and Trick," 3.5 "Homecoming," 3.6 "Band Candy," 3.14 "Bad Girls," and 3.15 "Consequences"), Ken (3.1 "Anne"), and Bob (3.13 "The Zeppo").
posted by miss-lapin (16 comments total) 7 users marked this as a favorite
In one of the interviews he did when the film came out, John Cusack said that his own 10-year high school reunion happened during filming, and he went more for the research-into-the-experience thing; he'd started acting professionally in high school and so he wasn't super-connected to many people in his class otherwise. He summed up the experience as being "like The Great Gatsby on acid."
posted by EmpressCallipygos at 2:51 PM on November 14, 2022 [3 favorites]

I think about the diner special "I Left My Heart in San Francheesy" all the time.

I thought that Dan Aykroyd elevated this movie and Hank Azaria can always be counted on. Of course, Joan Cusack. Loved the scene where she was 'shutting down' the office.

The protags were a decade+ years older than I was at the time so I didn't 'appreciate' the reunion aspects of the movie.
posted by porpoise at 6:39 PM on November 14, 2022 [3 favorites]

One of those movies that I just instantly loved so much there wasn't even any passion in it; it was like, oh yes, you are part of me now, welcome.

The line that stayed with me the most is the twist on Shakespeare, "Where are all the good men dead?"

The fight Blank has with the assassin in the hallway is also a great little fight!

What a great soundtrack in this one. And somehow they all fit together, too.

Legitimately my favorite movie of all time. I love the cast, I love the script, I love the performances, the soundtrack so good they released two CDs of it, just a great way to spend 107 minutes.

I also recently realized that it's a comedy made in 1997, there's a joke that is based on a character being mistaken for trans, and it's... actually fine? When Felix enters the reunion and Arlene asks who he is, he glances down at the badges and declares that he is Sidney Feldman. Arlene picks up the badge, notes that the yearbook photo on it is of a young woman, smiles, and says "Been overseas? You really have changed." He accepts it and heads into the gym, and she calls after him "Save a dance for me, now!" It's just a (mistaken) fact about him that she recognizes and it's nothing to attach a value to, and she's even flirtatious. It's sad that for 1997 that's pretty good, but I'm glad to have it.
posted by Pope Guilty at 6:55 AM on November 15, 2022 [8 favorites]

The first time I saw this was in the theater back in 1997. I didn't think much of it at all and for sure didn't appreciate the soundtrack. Watched it last week and omg, this film is great! And that soundtrack, it's something wonderful and beyond words.
posted by iamkimiam at 10:27 AM on November 15, 2022

Another favorite of mine. Do I like it more than this one? Hmmm...no, I probably prefer this one by a small margin, but they're both damn good movies.
posted by Naberius at 11:17 AM on November 15, 2022

I've no idea why this line has stuck with me for so many years, but I love Joan Cusack's delivery on the line "I just think it's funny that you came from somewhere."
posted by Ipsifendus at 2:25 PM on November 15, 2022 [5 favorites]

This is one my absolute favorite movies, though now it's deeply weird to be so far past my own 10th high school reunion.

Also as a lefty type it does occasionally strike me weird that my favorite movie is about a guy willing to kill several people in order to avoid joining a union!
posted by Pope Guilty at 9:32 AM on November 16, 2022 [4 favorites]

Oh, wow, I love this movie!
For me, it's right up there with Get Shorty, Fargo, Wag the Dog, Dodsworth and To Kill a Mockingbird ( you should see my taste in music!)

Maybe Thanksgiving is the day for a marathon of hits.
posted by alwayson_slightlyoff at 10:19 PM on November 22, 2022 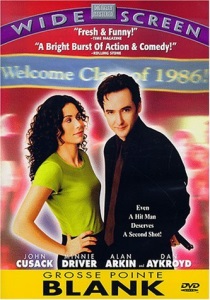