A New York University professor returns from a rescue mission to the Amazon rainforest with the footage shot by a lost team of documentarians who were making a film about the area's local cannibal tribes.

Currently streaming in the US on Shudder, Kanopy, and others. Also available for digital rental. JustWatch listing.

The film has, since its release, consistently been under fire for its graphic content, including scenes of torture, sexual assault, and genuine violence toward animals. It was even investigated as a potential snuff film in France.
posted by DirtyOldTown (18 comments total) 1 user marked this as a favorite
I don't ever need to see this a second time. I'm thinking most people don't need to see it ever.

There's little denying it is an exceptionally well-made film. It is serious in tone, shockingly realistic in its gore, and loaded with sharp social commentary. The structure and setup are ruthlessly efficient, so much so that it essentially invents the found footage horror film decades before that term became commonplace.

It's a perverse and vicious parlor trick of a movie, doing an unnervingly convincing job of making you feel you are watching real people be brutalized.

I understand why it's a rite of passage for some horror aficionados, but I don't ever want to see it again, personally.
posted by DirtyOldTown at 8:17 AM on November 16, 2022 [5 favorites]

This is one of those films on my list of "Films I kinda want to see just because of the controversy... but then I again do I really want to see it? Eh, maybe not." Definitely do NOT want to see anything with actual animal torture, so fuuuuuck that.
posted by Saxon Kane at 8:22 AM on November 16, 2022 [2 favorites]

I love horror and I love found footage and no matter how influential or significant it is in the subgenre I feel no need whatsoever to see this. Nothing I've ever heard about it suggests that there's any reason to beyond its significance, and that's a very weak reason for something.
posted by Pope Guilty at 8:50 AM on November 16, 2022 [1 favorite]

Yeah, I group this one with Pink Flamingos under "Do I need to see it? Would it enrich my life noticeably, having seen it? I doubt it." I don't mind if other people watch it (and even love it), but it's clear to me that I'm not the ideal audience for it.
posted by johnofjack at 9:29 AM on November 16, 2022 [1 favorite]

"This is one of those films on my list of "Films I kinda want to see just because of the controversy... but then I again do I really want to see it? Eh, maybe not."

Likewise. Everything I have heard about "A Serbian Film" seems the same. Watched the original "Oldboy" and that was about the limit of controversial films for me personally.
posted by rozcakj at 10:38 AM on November 16, 2022

I was upset for weeks after reading the Wikipedia entry for A Serbian Film.
posted by DirtyOldTown at 10:42 AM on November 16, 2022 [2 favorites]

I had to go read that wikipedia page, didn't I?

Like the majority of others, this is one of those movies that I have a vague sense of wanting to watch, simply because of it's legacy. But I also feel like that's ultimately not a good enough reason. Even if newer cuts omit the animal stuff, that's something I don't necessarily want to watch and tacitly condone (although, real animal killings have featured in mainstream movies like Apocalypse Now; but I didn't know that when I watched it).

I have this on my "To Watch" list in the Kanopy app, but I suspect it will remain there forever, never to actually be watched.
posted by asnider at 12:23 PM on November 16, 2022

I had to go read that wikipedia page, didn't I?

Sorry, there is a reason I didn't link to it. It still curdles my stomach, raises the hair on my arms and gives me a headache, general queasiness/uneasiness/anxiety, and I read the plot synopsis a looooong time ago.
posted by rozcakj at 12:59 PM on November 16, 2022 [2 favorites]

I actually own this film because as a former NYU professor it cracks me up to no end that the university is connected to one of the most controversial horror films of all time. I will say the interview with one of the main actors, which is on the dvd I have, is really amazing but also terrifying.

I completely understand and respect people who don't want to watch it. I went in blind knowing little about the movie at all. I'm not sure if I would watch it if I had known. But it's interesting to see a FF thread dominated by people who have not watched the film.

There is also the optimism of it-the ending of the film is that the tv executives decide to destroy the final footage being too disturbed by what they have seen. Pretty sure that ending would be derided as being completely unrealistic in a contemporary film.

To be honest, I think this is a very rich film with nuanced performances and a lot to say about colonialism, race, gender, and the media (of course). I was also very upset by what happened to the turtle. I am... relatively confident that horses were hurt or killed in Andrei Rublev, too, which I would cite as one of the best films I have ever seen, and that frogs were killed in The Holy Mountain, which I would call a masterpiece, and, well, we don't even want to get started talking about animal cruelty in westerns; we'll be here all day.
posted by kittens for breakfast at 1:42 PM on November 16, 2022 [1 favorite]

Back in the 90s this film had kind of an aura for being ‘extreme’ with rumors of the deaths being real and etc… which thankfully they aren’t. But for some reason I saw this en a movie theater, once was enough considering that aside from the shock value, that’s not a great film, but at least it has the honesty of implying the native tribes aren’t the monsters. Didn’t knew at the time that the turtle scene was real. For some reason the music of this movie still weirds me out.
posted by WaterAndPixels at 1:49 PM on November 16, 2022

The iconic theme song is used in one of my favorite horror shorts, Treevenge.
posted by miss-lapin at 1:59 PM on November 16, 2022

I watched this film shortly after Blair Witch Project was in theaters, and I wish I hadn't.
Separate from the turtle scene, there are images in this film I wish I didn't have in my head.
posted by FallibleHuman at 2:11 PM on November 16, 2022 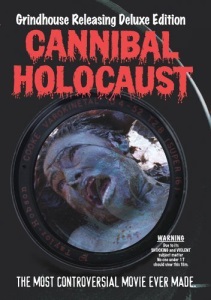