A psychopath is scouring New York City gay clubs and viciously slaying homosexuals. Detective Steve Burns (Al Pacino) is ordered to don leather attire, hang at the city's S&M joints and keep an eye out for the killer. But as Steve becomes immersed in club hopping, he begins to identify with the subculture more than he expected. Meanwhile, Steve behaves distantly around his girlfriend, Nancy (Karen Allen), the police force's homophobia becomes apparent and the killer remains at large.

The film was controversial upon release and sparked protests from gay activists who felt that the film had a homophobic political message and that it portrayed gay men as being attracted to violence, which could in turn justify homophobic hate crimes. Opinions from critics and some (though not all) within the gay community have softened some over the years. Notably, the film is a major source of inspiration/reference for the eleventh season of American Horror Story.
posted by DirtyOldTown (3 comments total)
I can totally see why this movie would have (and still can) offend people by focusing on the more "scandalous" side of the gay community, but despite that, I think it walks the line fairly well, certainly for 1980. Pacino is really good playing a man who comes to be haunted by his own sexual and violent desires, and the interrogation scene with the guy in the cowboy hat and jockstrap is... well, it's one of the strangest things I've seen outside of a Jodorowsky movie.
posted by Saxon Kane at 8:18 AM on November 16, 2022 [1 favorite]

"Interior. Leather Bar" is being sold as Franco and codirector Travis Mathews' imagining of the 40 minutes that the ratings board made director William Friedkin cut from his 1980 thriller "Cruising," an Al Pacino thriller about a straight cop navigating the "gay underworld", to avoid an X-rating. But the project isn't quite what it purports to be.

I've been thinking a lot of this movie during the current season of American Horror Story. Probably time for a rewatch.
posted by The Underpants Monster at 3:07 PM on November 16, 2022 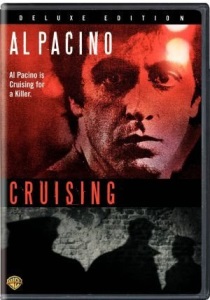