[TRAILER] While her son, Kichi, is away at war, a woman (Nobuko Otowa) and her daughter-in-law (Jitsuko Yoshimura) survive by killing samurai who stray into their swamp, then selling whatever valuables they find. Both are devastated when they learn that Kichi has died, but his wife soon begins an affair with a neighbor who survived the war, Hachi (Kei Satô). The mother disapproves and, when she can't steal Hachi for herself, tries to scare her daughter-in-law with a mysterious mask from a dead samurai.


Written and directed by Kaneto Shindô. A Japanese film.

Currently streaming in the US on HBO Max and Criterion. JustWatch listing.

Donate $20 or more to MeFi and you can MeMail me a request for a themed day of your own. I'll fill up the sidebar on FF with six movies that fit your theme.
posted by DirtyOldTown (1 comment total) 2 users marked this as a favorite
Ooh fun! This is one of the ones I need to watch soon for my blog - I am already locked into watching something else with my parents this week, but I'll have to watch this one after so I can catch up with y'all.
posted by EmpressCallipygos at 10:30 AM on November 21 [1 favorite] 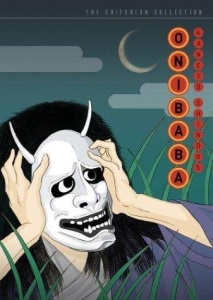