[TRAILER] Peter (Itay Tiran) receives a piece of land as a gift for his upcoming wedding. While preparing the property to build a home for his new family, he finds human remains in the ground. He decides to keep the discovery to himself so that all of the wedding arrangements can go on as planned. However, the deeper he tries to keep his secret, the more he seems to be under control of something -- or rather someone -- and from then on very strange things begin to happen. A clever take on the Jewish legend of the dybbuk.


Co-written, directed, and produced by Marcin Wrona. This was Wrona's last feature film, as he committed suicide on while promoting the film at the Gdynia Film Festival.

An Israeli/Polish production in Polish, German, English, and Yiddish.

Currently streaming in the US on Kanopy, Plex, Tubi, and The Roku Channel. JustWatch listing.

Donate $20 or more to MeFi and you can MeMail me a request for a themed day of your own. I'll fill up the sidebar on FF with six movies that fit your theme.
posted by DirtyOldTown (3 comments total)
Gotta love those 92/54 critic/audience splits. I liked this one for its beautifully creepy atmosphere and gradually building weirdness, but it kinda falls apart - dissolves, really - toward the end, which may be why the audience score is so low. A very different kind of horror movie with few of the usual scares but lots of strangeness.
posted by mediareport at 7:38 PM on November 21, 2022

I'm definitely on the audience side of this one. Grueling to get through, I did not like this movie.
posted by kittens for breakfast at 8:32 PM on November 21, 2022

I think this one is a masterpiece, the only problem with it being that it is barely a horror movie at all. All the stuff about the possession is pretty much incidental to the actual horrifying story, which is that the source of the groom's family's family's riches, and the land that was given to him, is that they took over all the things that used to be owned by the Jewish people who lived there before the war, land and all, and there is a pretty clear implication that the gentiles in town murdered the Jews there. To me the most devastating scene is at the end, when the one remaining Jewish person left in the area breaks down crying in the car when he remembers the community that used to be there.
posted by whir at 8:59 PM on November 26, 2022 [1 favorite] 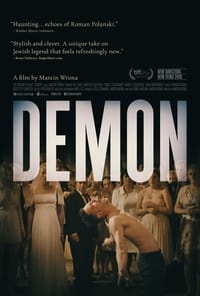