[TRAILER] Captain Etienne Navarre is a man on whose shoulders lies a cruel curse. Punished for loving each other, Navarre becomes a wolf by night whilst his lover, Lady Isabeau, takes the form of a hawk by day. Together, with the thief Philippe Gaston, they try to overthrow the corrupt Bishop and break the spell.

From Wikipedia:
“Originally, Kurt Russell was cast as the male lead alongside Michelle Pfeiffer. The role of the pickpocket was offered to Sean Penn and then Dustin Hoffman, before Donner decided to go with Matthew Broderick. Eventually, Russell pulled out during rehearsals, and Rutger Hauer was chosen to replace him.”

65% on Rotten Tomatoes
posted by iamkimiam (29 comments total) 6 users marked this as a favorite
I set a goal this year (2022) to watch 200 films and this was the one that got me over the line! First time watch and I can imagine that I would have absolutely loved this when I was younger. Feel lucky that I somehow got to save the delight of this silly film for now. (Reminds me of being introduced to Terry Pratchett in my late 30s, what a treat.)

I really appreciate the actors not trying too hard to do British accents. Just a little is enough, we get the idea. These weren't good, but they weren't comically bad either.
posted by iamkimiam at 1:36 PM on November 21 [8 favorites]

Broderick is one of those American actors that just always seems contemporary and should never have been asked to play someone form the middle ages.
posted by octothorpe at 1:53 PM on November 21 [15 favorites]

That is so true. Like Christian Slater. It just doesn't work.
posted by iamkimiam at 1:54 PM on November 21 [5 favorites]

He's playing a medieval Italian thief and he looks like he's working up the courage to ask Molly Ringwald to go to the Oingo Boingo show with him.

That's not even his fault or a dig at him. Some faces just don't work for some eras.
posted by DirtyOldTown at 2:46 PM on November 21 [17 favorites]

So much to like about this movie, and yet, and yet. Weirdly enough even the things that don't fit are things I like. I loved the Alan Parsons Project back then (haven't listened to any of the albums in forever, so I'm not sure how well they've aged) and I liked Matthew Broderick. But neither belonged in this particular movie.

But Kurt Russell? I can't imagine anyone but Rutger Hauer in that role.
posted by Naberius at 2:52 PM on November 21 [4 favorites]

Two absolutely beautiful leads being swoony and lovely and stoic and romantic. Broderick doesn’t fit, true, but I can set him aside for all the good stuff.
posted by PussKillian at 3:23 PM on November 21 [7 favorites]

I enjoyed this movie a lot when I saw it originally.
The soundtrack is great, but I guess some don't like it.
posted by cuscutis at 3:48 PM on November 21 [3 favorites]

Michelle Pfeiffer is just heartrendingly beautiful in this film.
posted by merriment at 3:54 PM on November 21 [12 favorites]

I always loved this movie... and I think Broderick works really well here. Couldn't imagine anyone else as Gaston. He's got an inherent fourth-wall-breaker quality to be sure, but having his character holding a running conversation with God was a great way to use that.

As for the accents, as an (American) linguist I object to contemporary British English dialects being the yardstick for English in medieval fantasy movies. There's no evidence that group of English dialects are any closer to the Old/Middle English you'd expect to hear in a real "medieval" setting than any other dialects of contemporary English, American or otherwise. Not even sure how you'd objectively make that measurement in any meaningful way. In that sense, Kevin Costner and Alan Rickman did an equally good job in Robin Hood: Prince of Thieves. Possibly irrelevant to a discussion of Ladyhawke, whose biggest anachronistic crime is surely the Alan Parsons Project soundtrack (which I like!).
posted by lefty lucky cat at 5:08 PM on November 21 [6 favorites]

cuscutis, all I can say is that my own comment would be:

I enjoyed this movie a lot when I saw it originally.
The soundtrack is terrible, but I guess some like it.
posted by kyrademon at 6:29 PM on November 21 [1 favorite]

I saw this one at the drive-in. THE DRIVE-IN!
posted by The Underpants Monster at 6:33 PM on November 21 [2 favorites]

Broderick is one of those American actors that just always seems contemporary and should never have been asked to play someone form the middle ages.

It's absolutely a thing! some people just can’t be believably cast in a period piece like sorry Jessica Biel you have a face that knows about text messaging
posted by haileris23 at 8:30 PM on November 21 [8 favorites]

haileris23, love one of the follow-up tweets: "Walton Goggins should not be in anything that's set in America post 1899, and neither should his name".
posted by Halloween Jack at 4:55 AM on November 22 [3 favorites]

I was trying to think of a face as localized to a particular era as Broderick's. I came up with Humphrey Bogart. Try to imagine him in John Cusack's role in High Fidelity.
posted by DirtyOldTown at 6:24 AM on November 22 [2 favorites]

My main recollection of seeing this movie is that I wished I could turn into a hawk.
posted by Lawn Beaver at 12:58 PM on November 22 [3 favorites]

I haven't seen this in years, but I definitely enjoyed it - such big fun. And yes, Pfeiffer is just stunning in this.
posted by rmd1023 at 4:55 PM on November 22 [1 favorite]

It definitely is barely trying to be period and the soundtrack is dreadful, but I do have a warm place in my heart for this movie. I especially am fond of Phillipe's relationship with God (which did feel rather Ferris Bueller-ish)

"God, if you help me out here I'll go to church every day, twice on Sundays."

"I have no idea where YOU were God, but it is clear that I got out of there completely on my own. Maybe next time You should try harder."
posted by Wink Ricketts at 6:20 AM on November 23 [4 favorites]

I LOVE THIS MOVIE! When you think about all the anachronistic elements, the mix of actors and acting styles, the setting (WHERE are they? Is it England, France or Italy? Who knows!) it should be an absolute disaster, but somehow it works. A lot of credit has to go to John Wood as the Bishop, who I found to be terrifying and Leo McKern who was so great as the drunken monk in the dilapidated castle. Michelle Pfeiffer and Rutger Hauer where a perfect romantic couple, so perfect even a hopelessly miscast Matthew Broderick couldn’t ruin it.
posted by pjsky at 5:13 PM on November 23 [3 favorites]

Like the glorious Delta Knights, they live in Europe... somewhere.
posted by The Underpants Monster at 5:35 PM on November 23

To me it was Spain! Idk why, I guess the first helmets I saw looked vaguely conquistadorily and that was that.
posted by Ashenmote at 3:27 AM on November 24

All the weirdness was intriguing and just made it better (not the music though, that was just baffling). I liked it well enough to buy the movie tie-in novel at that time and read it a few times.
posted by Ashenmote at 3:35 AM on November 24

I'm pretty sure it's England, during or just after the plague. It was a triglossic situation then, with French nobility and that being the primary language. You had Latin as the language of education/religion. And then English was spoken by all the rest in the villages and rural areas. The plague changed everything and resulted in English being spoken here today.

There are various unintentional clues to this throughout the film and I was suprised by some moments of accuracy (probably not deliberate but delightful still).
posted by iamkimiam at 6:30 AM on November 24 [1 favorite]

There are various unintentional clues to this throughout the film and I was suprised by some moments of accuracy (probably not deliberate but delightful still).

iamkimiam, I would be thrilled to the bottom of my heart if you had time to expand on that intriguing comment!
posted by merriment at 7:25 AM on November 25

I too need to know the details iamkimiam.
posted by miss-lapin at 11:59 AM on November 25

Oh dear, I'm starting to really doubt myself on this. I had subtitles on and I remember hearing/reading the French names, seeing the Latin clergy (and mentions of Latin) and the English (speaking) peasants and thinking oh hey, sounds like triglossic Britain! But now that I ponder the people and place names more, I'm thinking that this might be medieval France or even Italy…which would put them closer to where they said Isabeau's dad was killed (in Antioch). And obviously the director didn't want to make this a foreign language film, so you get (British) English.

Much more certain about the time. Apart from the medieval armor, there were several mentions of famine and plague. In particular there's an offhand comment about how since the plague there were more wolves than ever. They were trapping them, which was a thing at the time in England (but probably elsewhere too?) … at any rate, wolves were extremely hunted and as a result became extinct in England in the century following the plague (15C).

I'm struggling to remember more detail about what struck me (and like I said, I'm starting to think my bias is showing here), but this gives me a great excuse to rewatch this and report back!
posted by iamkimiam at 2:59 PM on November 26 [1 favorite]

I rewatched it over the holiday weekend. I had really fond memories and it's dated but mostly works? You could definitely trim a half hour off of it to tighten it up. And Michelle Pfeiffer, the one female character, could have been given more acting to do. But always nice to see Leo McKern show up. I saw this after I saw Ferris Bueller, and yes Broderick's narrating stuff to god felt as if the whole idea were "Sword and sorcery, but with Ferris Bueller." Surprised Ladyhawke was actually made first!

Broderick's schtick didn't age well and might be the weak link, but interestingly I'm having trouble thinking how to fix that. In my head, I'm usually quite good at improving movies! But Phillippe is the POV character: If you just cut him out, the movie is transformed into all the other crap sword & sorcery movies of the era, with a loner manly man on a quest to kill some evil sorcerer. A replacement level actor in that role, playing it straight, probably makes it worse as the movie is now anchored by some generic, bland stock character and you notice the absence of Hauer and Pfeiffer for long stretches even more. There's no easy way to patch this; it'd need to be a total rewrite.
posted by mark k at 10:53 AM on November 28 [2 favorites]

Agreed. I remember thinking how funny it was that this film features a main character where the plot doesn't really involve him. It's entertaining and he holds the whole thing together somehow (through PoV, as you say), but it isn't really about him at all and it doesn't matter if he's there or not.

It's like a framing narrative (a la Princess Bride), but he's in the frame, almost in the way.
posted by iamkimiam at 11:32 AM on November 28 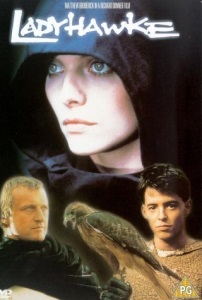