A loyal and dedicated Hong Kong Inspector teams up with a reckless and loudmouthed L.A.P.D. detective to rescue the Chinese Consul's kidnapped daughter, while trying to arrest a dangerous crime lord along the way.


When a Chinese diplomat's daughter is kidnapped in Los Angeles, he calls in Hong Kong Detective Inspector Lee (Jackie Chan) to assist the FBI with the case. But the FBI doesn't want anything to do with Lee, and they dump him off on the LAPD, who assign wisecracking Detective James Carter (Chris Tucker) to watch over him. Although Lee and Carter can't stand each other, they choose to work together to solve the case on their own when they figure out they've been ditched by both the FBI and police.

Maitland McDonagh: Needless to say, neither Carter nor Lee is into this babysitting gig, and after they're done playing adolescent tricks on each other they get down to the business of finding Soo Yung. Now, the thing that made 48 HRS. such an exhilarating, unpredictable ride was that it took all its elements seriously: The crime stuff was tough and bloody, while the mismatched buddy comedy was edgy and razor-sharp. Some 15 years down the line, the formula has gotten soft: The crime story here is lazily constructed, mostly an excuse for the give-and-take between Tucker and Chan, which is shrill and raucous without being especially clever. That said, the movie skims along at a pretty decent clip -- though the climax comes about 15 minutes too late -- and gives Chan (who's concentrating very hard on his English-language lines) ample opportunity to demonstrate both his trademark skills: lightning-fast martial-arts action and graceful physical comedy. Tucker's one-note shtick is abrasive -- Carter is pompous, conceited, reckless, not so bright and a relentless hound dog -- but he and Chan occasionally spark a genuine comic rapport.

Janet Maslin: ''Rush Hour,'' a fancier than usual showcase for Mr. Chan's poise and agility, features all the obligatory scenes in which the two main characters enhance their buddyhood. Mr. Chan shows Chinese food to his partner; Mr. Tucker teaches Mr. Chan to dance; Mr. Chan perfects a delicate little glide for hopping into Mr. Tucker's black Corvette convertible. These minor bits of business are often more amusing than the putative plot, which holds less mystery than it ought to. Third billing for debonair Tom Wilkinson, who was so wonderful in ''The Full Monty'' and appears only fleetingly in the film's first hour, gives too much away.

Madeleine Williams: In his first fully American movie (at least the first since his American "discovery"), Jackie Chan might not have the same volume of stunts as usual, but the quality is just as good. When watching the film, prepare to be awestruck several times.

But Rush Hour takes the traditional Jackie Chan actionfest one step further by adding something usually missing in his films: good, quality dialogue. And this is where Chris Tucker really shines. His fast-talking wit is nearly as spectacular as Jackie's stunts.

It's a shame that these two dynamic performers, the excellent stuntwork, and all the humor are put in the service of such a mundane plot. There haven't been any fresh developments in the buddy-cop genre since the mid-1980s, yet it is this old stalwart that we confront yet again. And that's not the only hoary cliche which rears its head here. No, the film is chock full of them. (We even meet a demolitions expert, played by Elizabeth Pena, whose career has entirely been made by making that 50-50 gamble: the red wire or the blue wire.)

But, still, there's more inovation here than in most of Jackie Chan's recent efforts, and his pairing with the wildly funny Chris Tucker makes this one worth watching despite the familiar plotting.

Trailer
posted by Carillon (2 comments total)
The parts that work, still really work. Chan's fish out of water demeanor is awesome, the starts are still so good. Carter having to grab Soo Yung's hand back when he gets her too excited about telling everyone to blow the place up is great. Ratner is a real prick though and it's shame he's connected to the film.
posted by Carillon at 1:30 PM on November 21

Buddy Cop movies rise and fall on the chemistry between the leads and Jackie Chan with Chris Tucker works regardless of how generic the plot might be.

Tucker's frenetic delivery is balanced by Jackie's not-quite-there english.
It never bogs down into pointless backstory, the stunts are fun, and Tom Wilkinson gets in in the end. 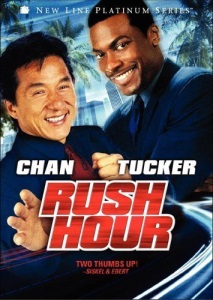