As the Allied forces approach Paris in August 1944, German Colonel Von Waldheim is desperate to take all of France's greatest paintings to Germany. He manages to secure a train to transport the valuable art works even as the chaos of retreat descends upon them. The French resistance, however, wants to stop them from stealing their national treasures. The station master, Labiche, is tasked with scheduling the train and making it all happen smoothly -- but he is also part of a dwindling group of resistance fighters tasked with preventing the theft. He and others stage elaborate ruses and more to keep the train from ever leaving French territory. JustWatch listing; leaving Amazon Prime in the US at the end of today, Nov 30.
posted by brainwane (10 comments total)
There are some odd choices that strain credulity, like having an American actor play the French resistance leader, although the realism of the effects is undeniable — there are real train wrecks and the train yard bombing scene is a real train yard being exploded. I also enjoyed the operational background of things like the crew casting and machining engine parts in their shop.
posted by autopilot at 12:17 PM on November 30, 2022

I just watched this over the weekend because it came up in a list of Andor influences. What an amazingly well crafted film; the black & white cinematography and editing are just beautiful and the big action set-pieces are all so real and non-CGI.

Seems fair to me to note that Burt Lancaster was an American actor rather than a French one!

A movie that trusts the viewer to understand some subtle schemes without anyone underlining them with dialogue -- I saw a note (maybe in IMDb trivia) that, like, the last 25 minutes only have like 1-2 lines of dialogue by Labiche.

Really suspenseful and immersive. I was pretty sure the resistance would win, but I didn't know how, and I didn't know how horrifically high the cost would be.
posted by brainwane at 2:00 PM on November 30, 2022

strain credulity, like having an American actor play the French resistance leader

You may want to skip Visconti's the Leopard if that's an issue for you (came out the year before this one - Lancaster was on a roll). Also features non-Germans Paul Scofield and the great cult actor Donald O'Brien (of Zombie Holocaust fame as well as much better films) as Germans. Don't worry lots of Germans playing Germans... including Dr. Mabuse as Major Herren! It is also worth mentioning this film is by the great John Frankenheimer (in between Seven Days in May and Seconds)! Probably my third favourite Frankenheimer after Seconds, and the Manchurian Candidate.
posted by Ashwagandha at 6:12 PM on November 30, 2022

Frankenheimer was on a great streak at that point.
posted by octothorpe at 7:23 PM on November 30, 2022

The Train recommended if you liked Star Wars: Andor.
posted by brainwane at 6:21 PM on December 1, 2022

That's the exact list that caused me to watch it last week. I'd probably seen it as a kid on TV since I watched every movie but I didn't remember it.
posted by octothorpe at 5:57 AM on December 2, 2022

So I watched this because of brainwane's note that it was going off Amazon, and it sounded interesting.

And the stunts! They really blew up a train yard! Really crashed two locomotives into each other! Derailed one and ran another off the tracks!

That's what I love about watching pre-1990s films. Now if you had to blow up a trainyard, they'd model the whole thing in CGI and blow it up in a computer; in 1964, they just blew up the fucking trainyard and filmed it.
posted by octothorpe at 6:17 AM on December 4, 2022 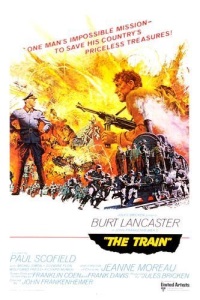